UMBC professors are navigating the startup economy – and finding harmony between research and commerce.

UMBC professor of music Linda Dusman found herself sitting next to UMBC President Freeman A. Hrabowski, III at a UMBC Orchestra concert in 2010. Between movements, she whispered snippets of background information about the music to one of the orchestra’s biggest fans.

Because Dusman is a musical composer with a deeply ingrained respect for the traditions of classical concerts, the experience provided a rare “aha” moment. What if there was a way to convey real-time information about the music and its meaning to audience members in an appealing yet unobtrusive way?

“I was looking at it as a way to give audiences the backstory, a fuller palette of information, so they can re-engage with a symphonic piece,” Dusman explains.

Around the same time, Dusman observed how her adolescent son and his friends quickly became enraptured by Apple’s new iPad, which had just come onto the market: “Watching how the entire existence of my son and his friends began to revolve around screens from school to entertainment made me think there has to be a way to harness this for good.” 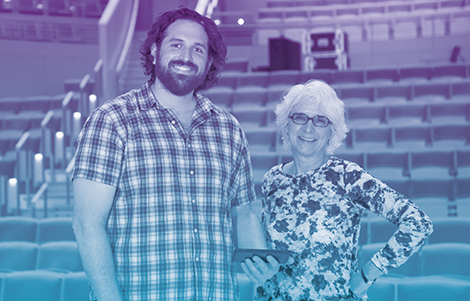 Concert goers are usually reminded to turn off their phones. But they might soon be turning on Octava at concerts for a brief text-based explanation of what the composer had in mind when he wrote that dark, moody movement. Background imagery in the app synchronizes with thematic elements of the work as it is performed.

“I look for that nice edge between visuals that adds to the experience without distracting from it,” Smallwood says.

Dusman and Smallwood say that their journey has not always been easy. They were twice passed over for faculty grants, experienced some technological failures, and got negative initial feedback from test audiences. But they credit a $150,000 Maryland Innovation Initiative grant and industry advice they received from experts at UMBC for their app finally hitting its high notes.

The tweaks that the duo made to Octava have won rave reviews from professional symphonies. This summer and fall, they’ll be testing the app at the Baltimore Symphony Orchestra. And Dusman and Smallwood are exploring whether Octava can work in other mediums, including theatre. This summer, they will get feedback from audiences at the Houston Shakespeare Festival.

The Maryland Innovation Initiative and the outreach and advising program (dubbed “site mining”) that aided Octava and its founders are both part of a robust University System of Maryland (USM) initiative to promote faculty entrepreneurship. These efforts – and others – are paying off in a number of research-based startups founded by faculty in offices and laboratories throughout UMBC.

Support for faculty-based entrepreneurship endeavors is rising, especially as funding for traditional research grants has dropped steadily over the past decade or so . Between fiscal years 2003 and 2015, for instance, research grants provided by the National Institutes of Health (NIH) – a key engine of research support – fell by almost 25 percent, primarily due to budget cuts.

Yet this emerging model of encouraging faculty members to find commercial applications for their research as well as publishing it represents a profound shift in academic culture for universities and their research faculty. To accelerate the transition, faculty entrepreneurship is supported by the broad-based Maryland Innovation Initiative launched in 2012 by the USM and run by the Maryland Technology Development Corporation, or TEDCO – an independent organization created by the Maryland state legislature to support the transfer of technology from Maryland’s research universities and laboratories to the marketplace.

To date, UMBC faculty members have received more than $1.7 million for a total of twenty projects from the initiative. Out of 21 awards made by the program to UMBC researchers, 13 projects are in a developmental phase (Phase 1) and six projects, including Octava, are in a testing and beta mode (Phase 2).

Two projects have reached Phase 3, in which a company moves from product development toward profitability. One is Tarsier Optics, founded by professor of physics Yanhua Shih, which focuses on development of a high-resolution camera system for surveillance. The other is VakSea, a company in which Vik Vakharia, a professor of marine biotechnology at the Institute of Marine and Environmental Technology (IMET), serves as chief science officer.

Ultimately, the goal behind the initiative is for universities to become a greater piece of Maryland’s economic engine. And UMBC is making great strides toward that goal.

“UMBC is successfully moving technology through the program from the validation phase to company formation,” notes Jennifer Hammaker, director of the Maryland Innovation Initiative. “It doesn’t happen overnight. When you’re changing the culture and educating faculty members, it’s a process.”

A key aspect of the initiative is identifying technologies that might be suited to the program and getting the ball rolling. It’s called “site mining” and resources have also been deployed to create opportunities to dig deep into research at UMBC and other schools covered by the initiative. 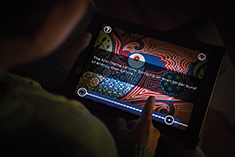 “For years, when faculty members would get tenure, there was no recognition related to commercialization. Everyone focused just on education, research, publications and service. That’s changing,” says David Fink, who is the entrepreneur in residence at the bwtech@UMBC Research & Technology Park. Fink is a site miner at UMBC, and he brings immense experience in founding and working for startup biotech companies to his role as an adviser to the 20 early-stage incubator companies at the university.

Fink also actively seeks out potential entrepreneurial ventures among faculty members at UMBC along with two other dedicated site miners. Once UMBC’s miners identify prospective projects, they serve as mentors to develop the projects, prepare a solid business application, and then act as champions throughout a rigorous review process.

This support is paying off. Fink estimates he’s talked to 60 professors across campus to gauge whether or not their research could be the foundation for a startup.

“We’ve identified about 25 projects we’ve thought were commercially viable,” says Fink. Eight companies have formed with UMBC faculty members as founders, and several more are in development. “That’s probably more than in the university’s entire existence,” he adds.

When officials at the Maryland Innovation Initiative consider which projects to fund, Hammaker says they weigh the commercial viability and potential marketplace competitiveness of a proposal. She adds that the initiative is also one path for faculty startups to win the support they need to take their project to the next level. “It’s not a one-size-fits-all program,” she observes. “We’re one element of a broader ecosystem that works for some people.”

Mark Marten, a professor of chemical, biochemical and environmental engineering, was recently selected to participate in I-Corps. His startup, MycoInnovation LLC, is working to develop an additive for chicken feed that would be cheaper and safer than antibiotics, which are currently used in the majority of chicken feed to make the animals grow more efficiently. (The startup also received a $100,000 award from the Maryland Innovation Initiative.)

Marten has been at the university for two decades. He describes I-Corps as “entrepreneurial boot camp,” and he credits the program for making it possible for him to even imagine starting a company. “We have a lot to learn,” he adds. “We’re not business people.”

Fink says that the intense, two-month immersion program offered by I-Corps, which draws on the experience of Silicon Valley entrepreneurs, helps professors understand the underpinnings of commercial ventures. “It completely turns around the thinking of academics,” he observes.

The pivot to entrepreneurship in the academy has other effects as well. Faculty who acquire the skills and ability to bring academic knowledge to the marketplace can also shape how students view the role of academic research. And faculty members such as Dusman see a pedagogical aspect to their pursuit of success with projects like Octava.

“I’m now aware of the increasing pressure on higher education to not be an ivory tower,” says Dusman, “and to create, to help students think of themselves as citizens of the world, and to have a positive impact on the world, and to think entrepreneurially.”