Artists, scientists, and social change agents from across UMBC presented the third annual GRIT-X talks on October 13, sharing their ideas and perspectives on stage in UMBC’s Dance Cube. “All our talks gave a different facet, a different beam of light, on what we do at UMBC,” said Vice President for Research Karl Steiner, who spearheaded the event.

The value of stories

Documentary filmmaker Richard Chisolm ’82, interdisciplinary studies, explained how many documentaries and reality television shows today are tightly scripted and controlled, and how, in contrast, he uses an in-the-moment style of filmmaking to produce films that honestly represent a microcosm of the larger story.

Through films like Cafeteria Man, focused on school food reform, and Gun Show, about an artist who makes sculptures of assault weapons out of found objects, Chisolm gives viewers an entry point into thorny issues. Each topic he tackles is a “huge iceberg, the tip of which is an hour documentary,” Chisolm says. “The noblest thing to do is to tell stories in a way that the tip of the iceberg represents the iceberg fairly.”

Manil Suri, mathematics, emphasized in his talk that storytelling can benefit disciplines beyond literature and film. “Stories underlie so much of what we do, including math and other STEM subjects,” he said.

Suri weaves together his passions for storytelling and math on a daily basis: He teaches a course with Michele Osherow, English, about the relationship between math and the humanities, and he’s written a novel, The Godfather of Numbers, that is a sort of creation story for mathematics. He’s using excerpts from it in his math classes this fall.

Suri also urges people who are less keen on mathematics to broaden their perspective of what math is. “Math is about more than calculations,” he says. “It’s about ideas, and ideas, such as infinity, can be enjoyed by everyone.”

Nicole King, American studies, enjoys listening to and learning from others’ stories, with a focus on residents of Baltimore City. After an accident totaled her Corolla in 2010, King decided to go carless, which, she says, removed a barrier to her truly listening to Baltimore. Through taking the bus and more closely connecting with Baltimore in other ways, King shared, “I started to really see the beauty—that cacophony of voices and sounds—that make a city a city.”

King’s research seeks to understand how Baltimore residents are responding to change across the city, with a particular focus on public markets like Lexington Market, and arts districts like Station North. Through that work, “I found listening, really listening, has been the most important, but also the most difficult, method I have used in my research,” she said. She creates opportunities for her students to “show up and listen” through immersive class projects.

Listening to her students has helped shape her teaching and research, too. “Give students the agency to shape projects,” she recommends. “They have good ideas and should be taken seriously.”

Deborah Thompson Eisenberg ’91, political science, is a professor of law at the University of Maryland Carey School of Law, where she directs the Center for Dispute Resolution. She was motivated to pursue a law career because, she explained, “When our democracy encounters crisis, lawyers and the judiciary tend to step in to give voice to the powerless, enforce our laws and our Constitutional rights, and protect the most vulnerable.” However, over time, she reflected, “I’ve come to believe that if lawyers and judges truly want to foster a culture of conflict resolution, we need more than the power of the rule of law.”

Eisenberg began to focus on alternatives to traditional litigation: mediation and restorative justice practices, teaching our youth to “talk it out to work it out,” and teaching our politicians “to use consensus-building policies.” Conflict is inevitable and has been intensifying, Eisenberg argued, but “we can transform our culture of conflict to a culture of conflict resolution if we use all of our superpowers,” combining the rule of law, alternative dispute resolution, community connections, and education.

Disney’s Princess Tiana may not be a superhero, but, as the first black Disney princess, she is larger than life in the eyes of many young girls of color. Kimberly Moffitt, associate professor of language, literacy, and culture and Africana studies, discussed how Tiana broke the mold of the traditional Disney princess with her entrepreneurial, ambitious spirit in The Princess and the Frog. “Princess Tiana pushes the bounds of the princess trope and says, ‘No more. We can do this differently,’” Moffitt said.

However, Moffitt explained, Tiana is also an example of the “glass cliff,” a phenomenon in business where companies are more likely to hire women and people of color to leadership roles when those companies are in times of crisis and the risk of failure is highest. When Tiana came out in 2009, Disney hadn’t had a new princess-style protagonist since Mulan in 1998, and the brand was faltering. The Princess and the Frog didn’t achieve box office success itself, but, Moffitt argued, “Tiana created space for the next three princesses,” who all were more independent than their predecessors: Rapunzel in Tangled, Merida in Brave, and Moana in Moana. “Tiana was a catalyst to shift our perception of what a princess could look like—in skin tone as well as her actions.”

Eric Dyer ’95, professor of visual arts, shifts our perception of what moving pictures can be by reimagining the zoetrope, one of the original forms of motion picture. Zoetropes use a series of snapshots in a spinning cylinder to trick the mind into seeing a moving scene. “As an artist, I pick up the tactile and interactive zoetrope where it was abandoned 120 years ago,” Dyer said, “and continuously reinvent it to make films, interactive animated sculptures, and immersive installations.”

At GRIT-X, Dyer demonstrated his work for the audience and, for the first time, shared the story behind each piece. Attendees enjoyed frolicking onions and peppers and reflected on Dyer’s exploration of the industrial heydays of the U.S. and China. “Thank you for sharing this performance storytelling experience with me today,” Dyer shared as he closed. “There’s something very human about it that isn’t possible either virtually or remotely.”

Diane Bell McKoy ’73, social work and sociology, is the CEO of Associated Black Charities of Maryland. She used her GRIT-X talk as an opportunity to share a powerful personal story of seeking treatment for depression in a broken mental healthcare system. Systems in place in the United States, she argued, perpetuate stigma and fail to support a sense of self-worth for people of color, and she is working to change them.

McKoy’s work has a particular focus on closing the racial wealth gap. If wealth continues to accrue at current rates, it would take a black family 228 years to accrue as much wealth as a white family, McKoy said, and it would take a Latino family 84 years. McKoy encouraged attendees to “look at the world through a new lens” and be willing to question current systems, from employment to education to healthcare.

Shawn Bediako, psychology, is also interested in changing perceptions around race, with a focus on health and science. “Ideas about race can become inscribed in our minds if they’re repeated often enough,” he said at GRIT-X, using the example that many people seem to believe, incorrectly, that sickle cell disease is exclusive to black people. 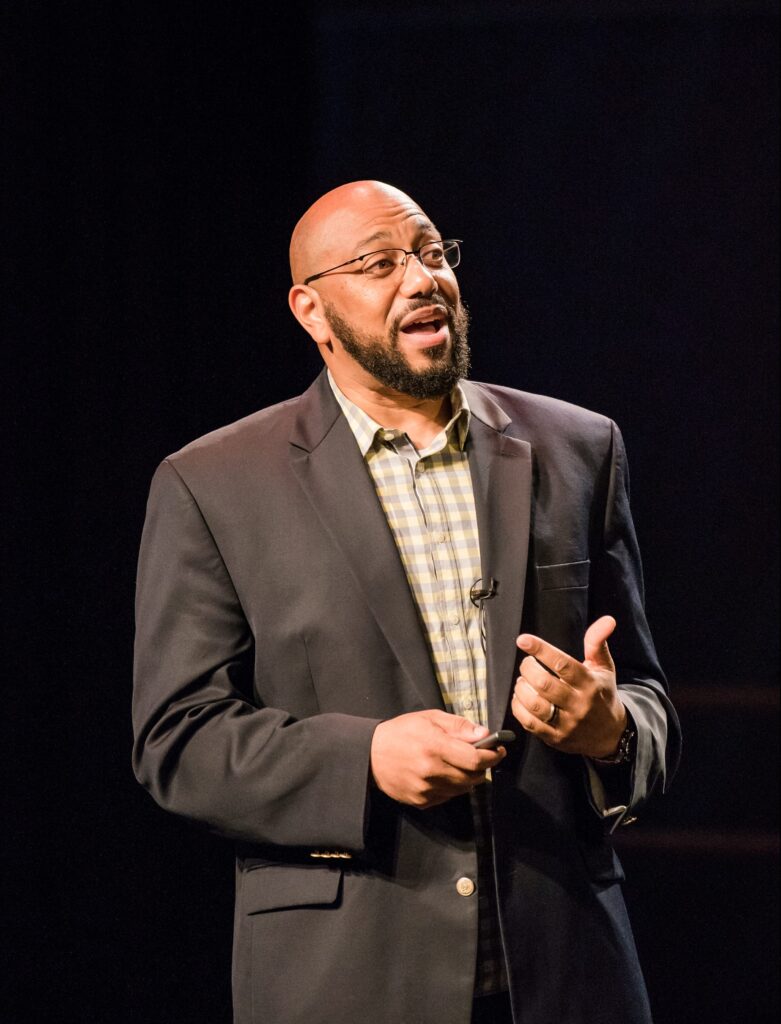 Bediako went on to explain how race is a complex legal, social, and cultural construct that impacts people’s lives in dramatic ways. But he also shared that he has hope this can change, and that UMBC can develop leaders who will impact the way we think about race. “I feel confident that an institution like ours, with a commitment to inclusive excellence at all levels of the arts, humanities, and sciences,” he said, “can help…change this inscription and hopefully shift this paradigm.”

To close the program, Kavita Krishnaswamy ’07, computer science and mathematics, Ph.D. ’19, computer science, shared her work developing solutions to assist people with disabilities and mobility challenges. Krishnaswamy, who has spinal muscular atrophy, gave her presentation via a telepresence device that allows her to navigate the world from her home in Columbia, Maryland.

Krishnaswamy is the recipient of the Google Lime Scholarship, was named a Microsoft Fellow, and was included among the Baltimore Sun’s “25 Women to Watch.” She is currently working on projects including a bed that allows people with mobility challenges to adjust their position along many different axes of movement, and a robot to enable people who previously could not use the bathroom unassisted to do so independently.

“We have a lot of problems in the world, and I really feel that robotics can solve many of those problems,” Krishnaswamy said. “So in that way we can really promote social progress and elevate the global living standards. That, in turn, can increase the quality of life for people with disabilities, seniors, and their families.”

One of her closing remarks echoed the sentiments of others at GRIT-X. “Even though our perspectives are many and diverse, our vision is one,” she concluded. Whether dismantling stigma, finding new ways to connect students with intimidating subjects, or changing how we think about conflict, all the speakers emphasized how the UMBC community can reach together to improve the world of tomorrow.

Banner image: Manil Suri, mathematics, at GRIT-X. All photos by Marlayna Demond ’11 for UMBC.
Explore video of all GRIT-X talks on the Research at UMBC website.