UMBC alumnus Ben Marcin ’80 traveled the world with his camera. But he has found acclaim investigating the often bitter poetry, beauty and truth in local landscapes. 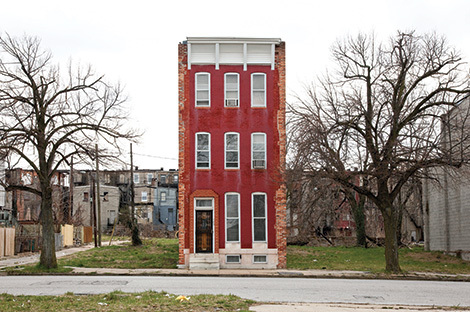 The photographs of Ben Marcin ’80, economics, are gaining a much wider audience of late. His work has been shown at venues including the Delaware Art Museum, The Center for Fine Art Photography in Ft. Collins, Colo., and at the C. Grimaldis Gallery in Baltimore – where he is currently represented and recently had a solo show this past winter. His photos are also in a number of group shows this summer, including at the Houston Center for Photography (“Photolucida Presents: How One Thing Leads To Another”); Towson University’s Center for the Arts Gallery (“Artscape 2014: Home: Human = Cage: Cockatoo” from July 10 to August 9) and the Griffin Museum of Photography, Boston (“Peter Urban Legacy 20th Annual Juried Exhibition” from July 10 to August 31).

Marcin’s work is also starting to be seized upon by those working in urban planning and writing about the larger forces at work in American culture. Marcin’s photographs have been featured in online galleries at The Paris Review, The Huffington Post, on Slate and in Wired, and twice in recent months on The Atlantic’s “City Lab” website.

The appeal of Marcin’s work to the larger audiences of policymakers and pundits is clear. His photographs engage with great issues of our time – urban blight and gentrification, homelessness, the vast expanses of rural America seemingly disconnected from our wired world – and yet they never slide into didacticism or agit-prop. The power of his art resides in the stark and unflinching eye of the photographer – and the images he captures with his lens.

UMBC Magazine asked Marcin to talk about his own artistic journey and introduce our readers to some of the series of images that are gripping the public imagination.

This is how I got started. 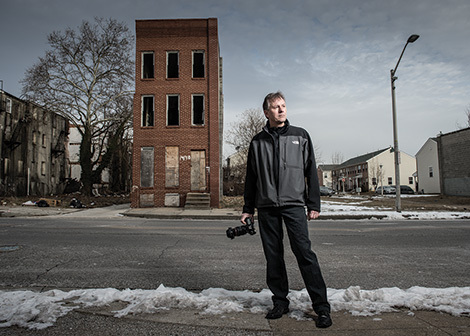 When I graduated from UMBC in 1980, I was 21 years old, absolutely clueless about what I wanted to do and six years away from buying my first camera. After several months of driving delivery trucks and working out of corporate mailrooms, I landed a job at the Social Security Administration (SSA) headquarters a few exits up the beltway from UMBC. I have worked at SSA to this day, the last 28 years in their enormous IT department helping build large computer programs and systems.

At age 27, I bought a small camera to help feed a creative urge that had been stirring for years, ever since my father started bringing home a series of modern art monographs from his job at the Library of Congress. I slowly taught myself how to use the camera from the ground up. In time, I learned how to take a good picture.

Eventually, I decided that it wouldn’t be a bad idea to start showing some of my photographs. In 1990, I approached the Knight Gomez Gallery in Baltimore. I nervously introduced myself to a very sophisticated young lady who turned out to be the gallery’s curator. Her name was Lynn O’Sullivan and I showed her a page of Kodachrome slides. She didn’t appear overly impressed with this first effort but she didn’t throw me out the door, either. Over time, she helped me with the process of putting together a small portfolio of prints and taught me how to best present them. Eventually she invited me to take part in a three-person photography exhibit at the gallery. That was in 1992 and it was the first of three shows I ended up having there. In 1997, I married Lynn and we have been together ever since.

Throughout my 30s and 40s, I travelled around the world taking photographs. I went through Central and South America, India, Turkey, most of Europe. Shooting locally had become passé for me; I thought I had “seen” everything of interest around Baltimore. It got to the point that between trips my camera would sit on a shelf, largely untouched, until it was time to head off on the next international adventure.

An interesting thing happened as I got older. I started to notice that there were a number of very intriguing things to photograph closer to home. I became more involved in the idea behind a series of photographs rather than the photographs as the endpoint. I shed some of the bright colors and exotic tones of my earlier work. A sort of coming home began to take place as I took a more thoughtful look at my immediate surroundings. In this light, I started several photo essays about some of the more interesting places where people live in and around Baltimore. The following describes some of these projects in more detail.

One of the architectural quirks of certain cities on the eastern seaboard of the United States is the solo row house. Standing alone, in some of the worst neighborhoods, these 19th century structures were once attached to similar row houses that made up entire city blocks. Time and major demographic changes have resulted in the decay and 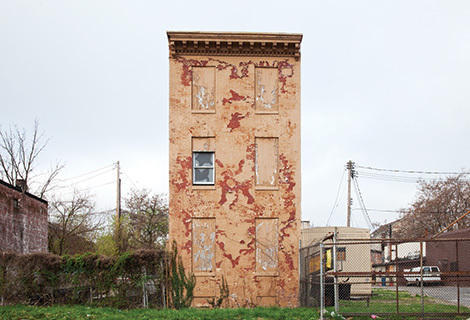 demolition of many such blocks of row houses. Occasionally, one house is spared – literally cut off from its neighbors and left to the elements with whatever time it has left.

My interest in these solitary buildings is not only in their ghostly beauty but in their odd, almost defiant, placement in the urban landscape. Often three stories high, they were clearly not designed to stand alone like this. Many details that might not be noticed in a homogenous row of 20 attached row houses become apparent when everything else has been torn down. And then there’s the lingering question of why a single row house was allowed to remain upright. Still retaining traces of its former glory, the last house standing is often still occupied.

While working on “Last House Standing,” I was also documenting the many abandoned homesteads in the rural areas around Baltimore that are now becoming planned communities, mega-malls, industrial parks and other forms of urban sprawl. Unlike the row houses, which were originally lived in by many people at one time, the abandoned houses are much more isolated and have the appearance of having been built on the frontier. 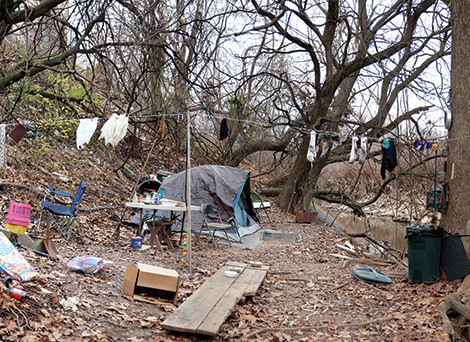 In 2011, I photographed the homeless camps in and around Baltimore. I do a lot of hiking in the area. As development has encroached upon whatever woods are left in the suburbs and industrial parks of Baltimore, I found myself practically stepping into a number of homeless camps that were carefully hidden among strips of trees or bushes running along highways or behind shopping centers. I became fascinated not only at the effort that went into remaining hidden in plain sight but also at the creativity involved. No two camps were ever alike. They ran the gamut from being completely exposed under bridges or fallen trees to semi-massive structures carefully constructed out of milk crates or wooden doors.

More than one resident told me that living in a tent was a personal choice – yet it seemed to me that there was often no other choice. Even more than the abandoned houses that I’ve documented, the homeless camps directly allude to the life trajectories of their owners. Not one of the camps remains today.