Decentering whiteness while working as a doctor abroad has made alumnus Matthew Loftus examine his medical methods and motivations again and again.

If you’re a foreign doctor practicing in an African country, there are important questions to keep asking yourself: How am I allowing my whiteness to shape my perception of my work and life here? Am I using my medical skills to equip the next generation of local doctors? Am I letting local leadership guide my steps?

In fact, if you’re Matthew Loftus ’07, chemistry, you started asking these questions earlier in your life, as a doctor in Baltimore City. They all still applied.

But for Loftus, the questions actually started before the medical license, before the move with his family to South Sudan, before getting displaced by a civil war that made its way to the hospital’s doorsteps, before visiting medical centers across East Africa to find a new location to serve, before spending nine months learning another new language, before his wife—a nurse—and three children settled in to a small house in Kenya, across the street from the hospital where he’s now still asking those questions.

“This is a continuous conversation,” Loftus says, sitting down for an interview over tea during a trip to Kenya’s capital, Nairobi. There is the way things have been done previously in medicine or in mission settings or in low-income American neighborhoods: “A sort of a very top-down, you know, people from outside making all the decisions,” says Loftus. “And that, that is ultimately unsustainable.”

Loftus grew up attending a Presbyterian church with his parents and 14 siblings in Bel Air, Maryland. After graduating from UMBC and marrying his wife Maggie, Loftus moved to the Sandtown-Winchester neighborhood of West Baltimore to join another Presbyterian congregation, New Song Community Church—this one founded on the principles laid out by the Christian Community Development Association (CCDA). Author Lawrence Lanahan describes the practice in an article for Al-Jazeera called Downwardly Mobile for Jesus that profiled the Loftus family.

“The CCDA’s model is similar to asset-based community development, which tries to build out from a community’s strengths rather than fix its deficiencies. But the CCDA asks more of its practitioners across the nation: that they have something personally at stake in the development. Leaders at New Song talked to Loftus about the core of the CCDA’s philosophy, the three R’s—relocation, redistribution and reconciliation.”

In Litein, Kenya, where he’s the family medicine consultant and program coordinator for the Kabarak University Family Medicine Residency, Loftus specializes in seeing patients with mental health problems and also supervises the medical residents’ time on the wards and in the clinics.

It was his time at UMBC that helped prepare him for many aspects of his life in Kenya, says Loftus. The personal reference letter he got from President Hrabowski for his admission to the University of Maryland School of Medicine didn’t hurt, but more specifically, Loftus points to his Arabic classes and his semester abroad in Egypt that helped in exposing him to new aspects of international life. UMBC’s Office of Pre-Professional advising also played a huge role, he says, in helping him get into medical school and graduate debt-free. His involvement, including a year as vice president, with UMBC’s chapter of InterVarsity Christian Fellowship gave him lasting ties to other Retrievers, but also taught him the importance of spiritual discipleship.

It’s been a year and a half since the Loftus family settled into their life in Litein, a high-altitude town in western Kenya that is most well known for its verdant tea fields. Loftus juggles his resident supervisor role with extended clinic hours, rounds, and spiritual development with the other medical professionals.

“When I was at UMBC, I knew I wanted to do medicine. I wanted to serve people through health care,” says Loftus. But over the years, after listening to people who are on the field and learning about what the needs were—there was just too much that any one person could do, he discovered. The answer for him, was then to get involved in health care education.

It was under the guidance of Lisa Kelly in the Department of Chemistry and Biochemistry, “who was very patient with me,” says Loftus, “despite the fact that it was while working in her lab that I realized I was not cut out for a life of research. But I do appreciate all the work that she did on my behalf and helping me move in a good direction.”

While researching where he could join an existing health care education program that had opportunities for his wife, a perinatal nurse, to work and where his children (ages seven, four, and two) could also flourish, Loftus eventually found Litein. There, “health care education was already happening to some degree but they really wanted to ramp it up,” he says.

An additional aspect that appealed to Loftus, was that after supervising the residents for four years, they would then move on to other locations, using their advanced medical skills to treat and train people from all over East Africa.

Phillip Blasto, a general surgeon who works closely with Loftus, grew up in the coastal region of Kenya but has worked at the hospital in Litein for the past four years.

The arrival of Loftus and another set of American doctors (Blasto refers to them as consultants, but in the States, they’re called attendings) has lifted a significant load from Blasto and the other physicians. Sitting at the table in the Loftus’s cozy living room, drinking local tea made sweet with milk and sugar, Blasto shares his thoughts on the addition of the medical missionaries. “He took a lot of weight,” Blasto says, taking care of “patients of mine and patients of the ICU…with Matthew here, the care of patients has improved, particularly in intensive care because he and the other consultants are available. If there was one biggest change, that would be that our intensive care patients now have someone to call and to see them anytime day or night or weekends.”

Ultimately, this elevates the reputation of Litein’s hospital and builds long term trust between the patients and medical practitioners, which has allowed the practice to grow, creating a new set of problems to manage. “We’ve grown in terms of patient numbers and people who trust us, which is significant,” says Blasto. “Nowadays bed space is an issue and theater space is an issue, so depending on some days, we have to put people in the corridors to be seen.”

The hospital—a long, bright green building situated on the highest ground in the town of around 2,500 people—is responding to the increased influx of patients by growing as well, increasing the number of respirators, adding new radiology equipment, and eventually expanding the building to include more bed space. The outside attendings have played a significant role in these changes by extending the consulting sessions by several hours each day and by taking turns for overnight on-call shifts. “That availability and the humbleness that people have seen have increased people’s faith in the facility,” Blasto concludes.

One of the questions Loftus sees as a critical aspect of his “continual conversation” involves asking himself how he can submit to local leadership—a tenet emphasized by CCDA and a foundational element of Loftus’s approach to the mission field. “I think submission is a hard word to think about, in our context, in the West,” says Loftus. “I think it’s such an important part of faith, of Christ’s life in us—of humility—that I think this sort of work is impossible without it.”

Loftus’s word choice of humility resonates with Sarah Fouts, assistant professor of American studies at UMBC. Fouts, whose research centers on accompaniment theory—a methodology for allies that supports movements led by people of color—guides her students to leverage their privilege in helping others navigate systemic barriers. “It’s really hard because you want to make yourself so important, so special. But you need to decenter yourself in those situations, and that’s really challenging,” says Fouts. “So how to create a sustainable project means exactly that, not making everything so reliant on you.”

Students and professors often have this I-want-to-do-it-all-mentality, continues Fouts, “but bringing other people into the project, as leaders, helping elevate not just your own research… maybe it takes more time and effort but ultimately, it’s going to be better for everyone involved. You know, it’s humbling.”

As a way to get more people involved in conversations about privilege and responsibility, Loftus collaborates with two other UMBC alumni and fellow InterVarsity members, Peter Gaultney ’08, computer science, and Timothy Milligan ’09, computer science, to create a weekly newsletter called Read In Case of Emergency, where they share articles and thoughts on ethics, policy, and society. Loftus has also published extensively, writing articles responding to people asking if it’s dangerous to take your children to live overseas, advocating for more than “good intentions” in thinking about solutions to poverty, and letting local communities speak for themselves in the wake of tragedy.

These articles and dozens more that Loftus has penned while living in West Baltimore and then in East Africa contrast sharply with a 2005 Retriever Weekly article that set the stage early on for how Loftus navigated the waters of being a privileged white doctor in under-resourced communities. As a teenager, Loftus participated in medical missionary trips to Kenya, and UMBC’s student paper wrote about his summers there. The resulting article—not written by Loftus—is, to say the least, not woke.

Correctly so, UMBC’s African Student Association responded strongly to the tone and vocabulary of the piece—it dripped with White Savior-ness. Loftus met with the ASA and listened to their reactions, opening himself up for more in depth dialogue than the article allowed. This experience added another layer to Loftus’s growing conviction that in order for him to continue pursuing a career in medical missionary work overseas, he would have to immerse himself in better ways of approaching his role in a field with a very troubled history of white supremacy and colonialism.

“I think, because there is still a default way that we think and talk about interventions in impoverished communities, oftentimes it does take a moment of ‘oh, I need to be doing it differently than the way that I would normally, as a white privileged, you know, wealthy outsider,’” says Loftus.

“But then once you get to that point, you have to be continuously assessing it and asking yourself and asking the people around you, like, ‘Are we doing this well? Are we involving the people that are, you know, that are most affected by this? Am I working to equip people with the skills that they need to lead themselves, and to serve themselves, to help themselves?’” Loftus trails off as the list of relevant questions mount.

“So I think that’s a really big part of it, is the fact that that process is never done.”

Header image: Loftus listens while on rounds with his residents. Photo by Dixie Gaultney. 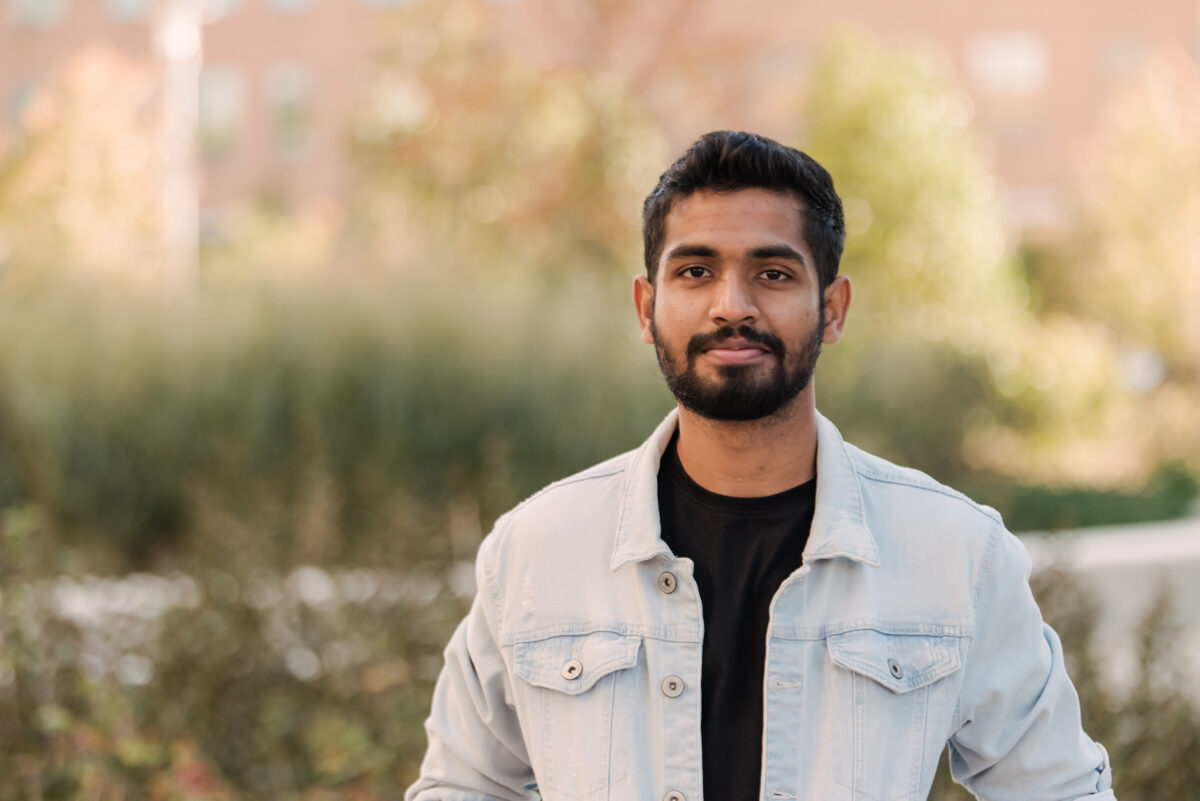