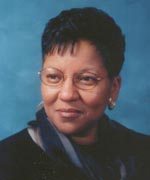 For anyone with anything less than a “half-full” attitude about the potential for positive social change, Diane Bell McKoy has one unwavering response.
“Challenges are just opportunities,” said the 1973 sociology graduate, who serves as president and CEO of Associated Black Charities, a Baltimore non-profit devoted to making African-American individuals and families economically self-sufficient. She is also a member of UMBC’s Alex. Brown Entrepreneurship Center Advisory Board.
“I love challenges, as it relates to improving outcomes within the community,” said Bell McKoy, who is organizing a major gala in June to support ABC’s efforts. “I am hooked on trying to figure out pieces of the puzzle to make major social changes.”
An Agenda of Empowerment
Bell McKoy came to UMBC after learning of its social work program and its connection with the University of Maryland Graduate School of Social Work. She first became interested in social work when her field placement advisor noted that her social and communication skills would be helpful in such work.
“She noticed my ability to decipher and pick up on issues and emotions and translate those to lead people to help,” said Bell McKoy, a native of Washington, D.C.
Following her graduation from UMBC, Bell McKoy earned her master’s degree in social work in 1975. Although she spent some time as a case worker, she eventually found her calling in the administrative side of social work, spending ten years with Empower Baltimore Management Corporation, then serving as a senior fellow with the Annie E. Casey Foundation.
There, she developed a different level of patience to focus on using resources of relationships in the African-American community to further enhance her social change agenda. She also created a program called “More in the Middle,” which works to develop a greater African-American middle class, and pays attention to improving the outcome of low wealth African-Americans.
“Challenges Are Just Opportunities”
Bell McKoy started her work at Associated Black Charities in November 2006. In addition to instilling positive economic goals, ABC also serves to educate African-Americans on how they can make a difference in their community by contributing their time and talents to various projects. The work is never boring and always fulfilling.
“ABC has continued to stretch me, stretch my thinking, stretch my ability to connect in relationships,” said Bell McKoy.
“I see people get disconnected, and the reality is, if we all aren’t trying to pay attention to make a difference, then we can’t become a strong economic state and sustain that over time,” she said. “It’s not about being black, it’s about bringing together a stronger community, a stronger country, whether it’s African-American, Latino, or whatever minority group. If we’re not trying to close that gap, then we’re not trying to make America strong”.
ABC is one of five national organizations to receive the 2007 National Leadership in Action Award from the W.K. Kellogg Foundation, which recognizes outstanding philanthropic work done in minority communities by non-profit organizations.
Blazing the Trail for all Entrepreneurs
Over the years, Bell McKoy has contributed to her alma mater in a variety of ways. As a member of the Alex. Brown Center Advisory Board, which strives to infuse the university with the attitude, activities and ideas that will inspire entrepreneurial accomplishment in all its forms, she has found a way of combining her work and volunteer lives.
“Entrepreneurs have a focused agenda, and having those critical thinking skills like an entrepreneur is important,” for just about everyone, she said.
In addition, Bell McKoy is one of the original founders of UMBC’s Second Generation Scholarship, which is given annually for undergraduates who demonstrate a commitment to the advancement of minorities. She also spoke in the video shown at UMBC’s 40th anniversary celebration, crediting UMBC with further developing her critical thinking skills, her analytical skills, and her ability to translate those skills into a strategic mindset, which is extremely important in running an organization like ABC.
Although her work is often difficult, Bell McKoy thrives knowing she’s making an impact.
“We currently have a limited staff, so like any entrepreneur, I’m doing multiple jobs,” she said. “I don’t believe in stress. I believe that I’m blessed and highly favored. I love challenges.”
– by Melissa Gilden ’10
Originally posted May 2007