As an award-winning travel photographer and writer, Lola Akinmade Akerstrom ‘98, M.S. ‘02, information systems, uses her keen sense of sight to show her readers the wonders of the world. But it was at UMBC that she learned another valuable skill that has touched every aspect of her life, from career to parenting: listening.

Her trip to UMBC was an unexpected one, but a welcome opportunity when the universities in her hometown of Lagos, Nigeria shut down due to strikes in the mid-1990s. With extended family in Maryland, Akinmade Akerstrom had traveled extensively growing up but had not been an international student on a U.S. campus before.

As she settled into her new life in Maryland, she began to notice some differences between the cultures. People attempted to frame her story for her instead of listening to her, she said. Culture shock set in.

“For the first time in my life I encountered the American idea of Blackness,” shares Akinmade Akerstrom, a contributor for National Geographic, BBC, Lonely Planet and other media outfits. “In Nigeria, I was used to understanding people based on their cultural and ethnic differences, not their race, and we saw those differences as positive. That is how I saw the world, as well, and how people had seen me.”

In the U.S., she said, people made assumptions based on her skin color and accent. Unsure of her place in this new world, she stopped trying to explain through the noise and began, instead, to listen. This meant not reacting to people’s judgments, assumptions, and misconceptions – and letting go of hers, as well.

“I began to see what people were doing to me and I had to learn to not do the same. I learned not to frame or define someone upon initial meetings. I let go of all assumptions or predetermined narratives,” she said. It was not easy, but it was important to her to understand this new culture and build her own new community.

“Nigerians make the best of any situation. We don’t quietly fade into the background. We must show that we are here, that we exist,” she said. Akinmade Akerstrom immersed herself in the UMBC campus culture by joining the African Student Association, Intervarsity Christian Fellowship, and the Intervarsity Rugby team. She also enrolled in art and guitar lessons to develop hobbies that provided her balance. “My experience in college was culturally rich because I specifically sought out those sub-communities. It taught me to not allow others to define me.” 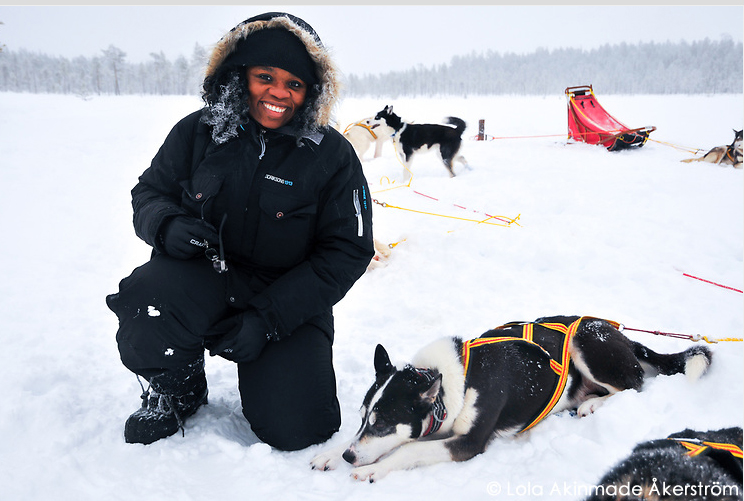 A year after graduation, Akinmade Akerstrom was hired as an information systems architect and programmer in Dayton, Ohio. She loved the position, but Dayton, devoid of the international vibe and extended family she had enjoyed in Maryland, was a true testing ground for the skills she had developed while on campus.

In need of an international community, Akinmade Akerstrom took a chance and approached Denton’s then-male-only rugby team with an idea.

“I walked onto the field and said, ‘I’m here to help you start a women’s rugby team.’ Their expressions were priceless,” remembers Akinmade Akerstrom. She was right. International women came from across Ohio to play and the team went on to win their division and develop some of the best rugby players in Ohio.

Over the next decade, she developed a thriving career and a strong community, which made it easier for her to take more risks. On a whim, she volunteered for Mark Burnett’s Eco-Challenge- Fiji, an international physical endurance team race. Her task was to travel to Fiji and listen to the athletes, the locals, the experts and document the impact of the race within a host country. The work also required her to post daily articles and pictures. Up until then, she had only taken pictures during her travels to inspire her paintings. But soon, the world of travel photography and writing became a viable career option and a true passion.

After four years of practice and confidence building, Akinmade Akerstrom decided to leave her twelve-year career as a geography information systems architect and programmer to become a full-time freelance travel photographer and writer in Stockholm, Sweden.

She was excited. Her family was terrified. Up to this point in her life, she had followed her parent’s advice by pursuing an approved traditional career. Having a minor in geography, the major she would have chosen for herself, was a compromise. This time, she listened to their concerns respectfully, but knew she could not be defined by limitations others wanted to place on her – even if they had the greatest intentions.

“My parents had a cultural mindset that felt being a doctor, lawyer, engineer, or having tech experience was the most lucrative career choices,” says Akinmade Akerstrom. “My mom was deeply worried about me when I decided to freelance full time. Ultimately they both wanted me to be happy. Initially, she wanted me to tell people my degrees when I introduced myself as a travel photographer and writer. Now my mom is my biggest fan.”

Akinmade Akerstrom’s ability to go into unfamiliar places and listen continues to be the foundation of a path that keeps evolving. Today as a Nigerian woman married to a Swede, being trilingual, and raising a family in Sweden, she is focused on leading the way for creatives of color to not be limited to working within their own cultural context, but to be accepted as authorities in other cultural contexts of which they are a part of.

“Just because I am African, I don’t always have to write about Africa. I can write about Swedish culture and write about it with authority,” says Akinmade Akerstrom.

“Above all, listen to people tell their own story the way they want to tell it,” she says. It is a skill she is passing down to her daughter, along with her love of travel. “I do this for my daughter. So when she grows up and someone tries to put her in a box and tell her this is what she can’t do because she is Black, mixed, Nigerian or Swedish. Then she can say, ‘Have you met my mom?’”