What happens when you send a Department of Defense (DoD) cybersecurity expert to Capitol Hill for a year? Starting in January 2017, I had the opportunity to serve as a Brookings Legis Congressional Senior Fellow where Executive Branch employees work on the Hill to learn the legislative process. Little did I know that in addition to putting my technical expertise to work, I’d also learn civics lessons far beyond anything I could ever read about in a textbook.

Armed with my resume containing my UMBC undergraduate degree in Information Systems Management, graduate degree from National Defense University, NSA and UMBC Cybersecurity job credentials, I set off to find an assignment with a member of the House of Representatives or Senate. I explored the historic halls of the Senate and the House, dropped off resumes with starry-eyed interns, and crossed paths with red-hatted Trump Inauguration attendees picking up tickets at their Representative’s offices. It was a cold January day when I was walking the halls of the Rayburn building interviewing with Legislative Directors for fellowship jobs, when I found myself in a ladies room with several inauguration attendees from Georgia. They were lovely in their red hats with big feathers and “Make America Great Again” scarves. Noticing my business attire did not quite fit the standard Trump Inauguration attendee’s dress code, one of them asked me in her sweet, southern accent about my work. When I told her that I was nervously interviewing for a job with Congress, she said, “Honey, I will pray for you to get a good job.” 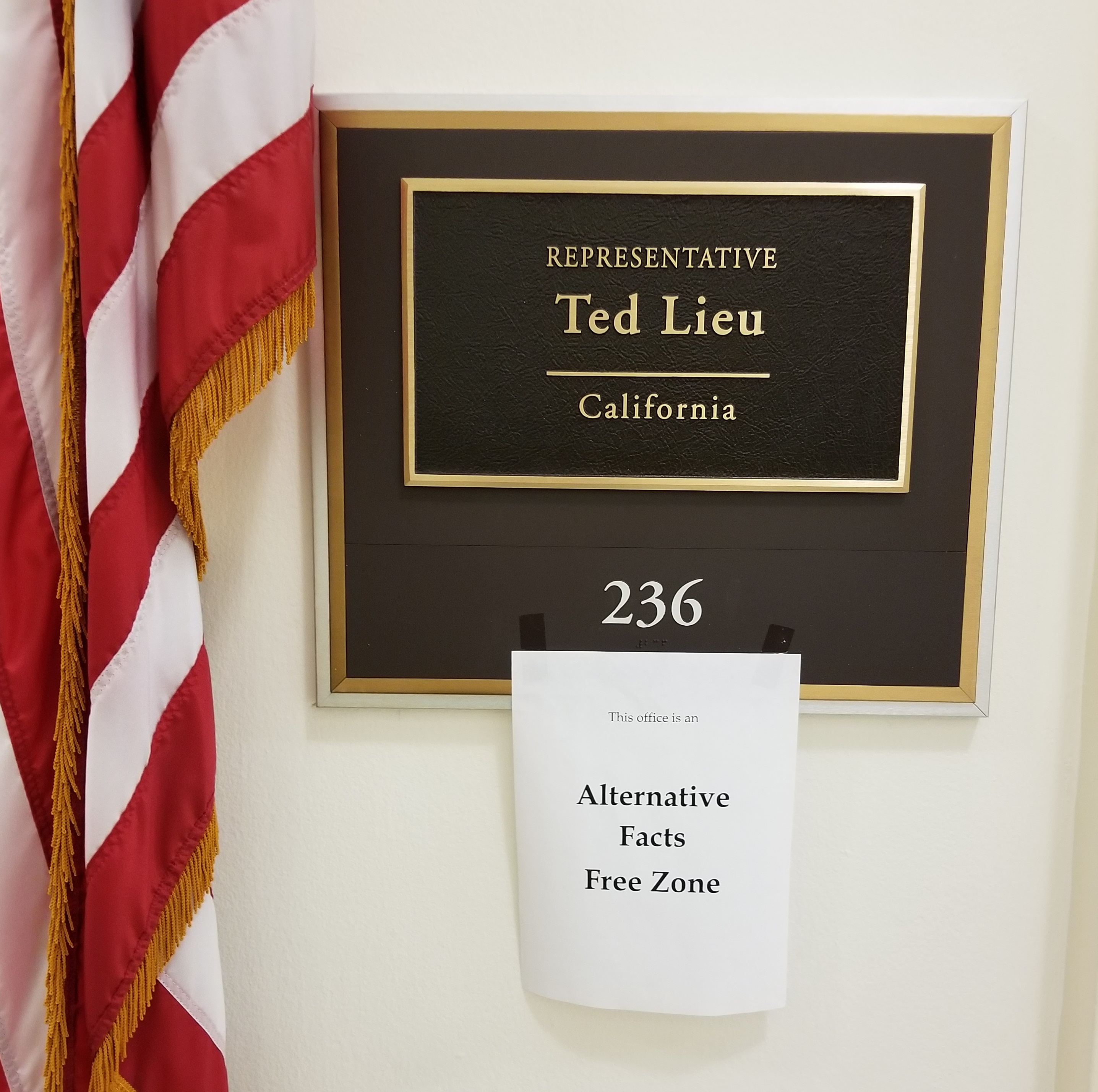 I guess the prayers worked because after two weeks of interviews, I landed at an exciting office with a progressive Congressman from California – Representative Ted Lieu. Congressman Lieu was heavily focused on cybersecurity and was glad to have someone help write legislation to address the many cyber vulnerabilities we were facing in the world. But the year took an interesting turn for Congressman Lieu when the new Trump administration immediately started discussing crowd sizes at the Inauguration, drastic immigration reforms, and claims about access to “alternative facts.” The Congressman quickly became known as the member with an “alternative facts free zone” and took to Twitter to express his progressive views and dissatisfaction with the new administration.

But there was plenty of serious work to be done. I attended every hearing I could find on cybersecurity including those about election hacking. As a lifelong technology guru, I would never have imagined that Twitter and Facebook would become the vehicles of information warfare?

I began attending Cybersecurity Caucus meetings and was asked to use my UMBC connection to find a leader in academia to speak at a hearing on cybersecurity education. I reached out to Dr. Richard Forno, Director of UMBC’s Cybersecurity Graduate Program, who was selected to be one of the featured speakers for the Caucus event.

I had the opportunity to draft bills to increase scholarship money for Cybersecurity education, re-train industrial workers in cybersecurity specialties, create a certification program for Internet-of-Things devices, and build special cybersecurity labs at schools in economically-distressed regions as part of an American progressive infrastructure Bill. I especially enjoyed researching cybersecurity issues for domestic and international elections. 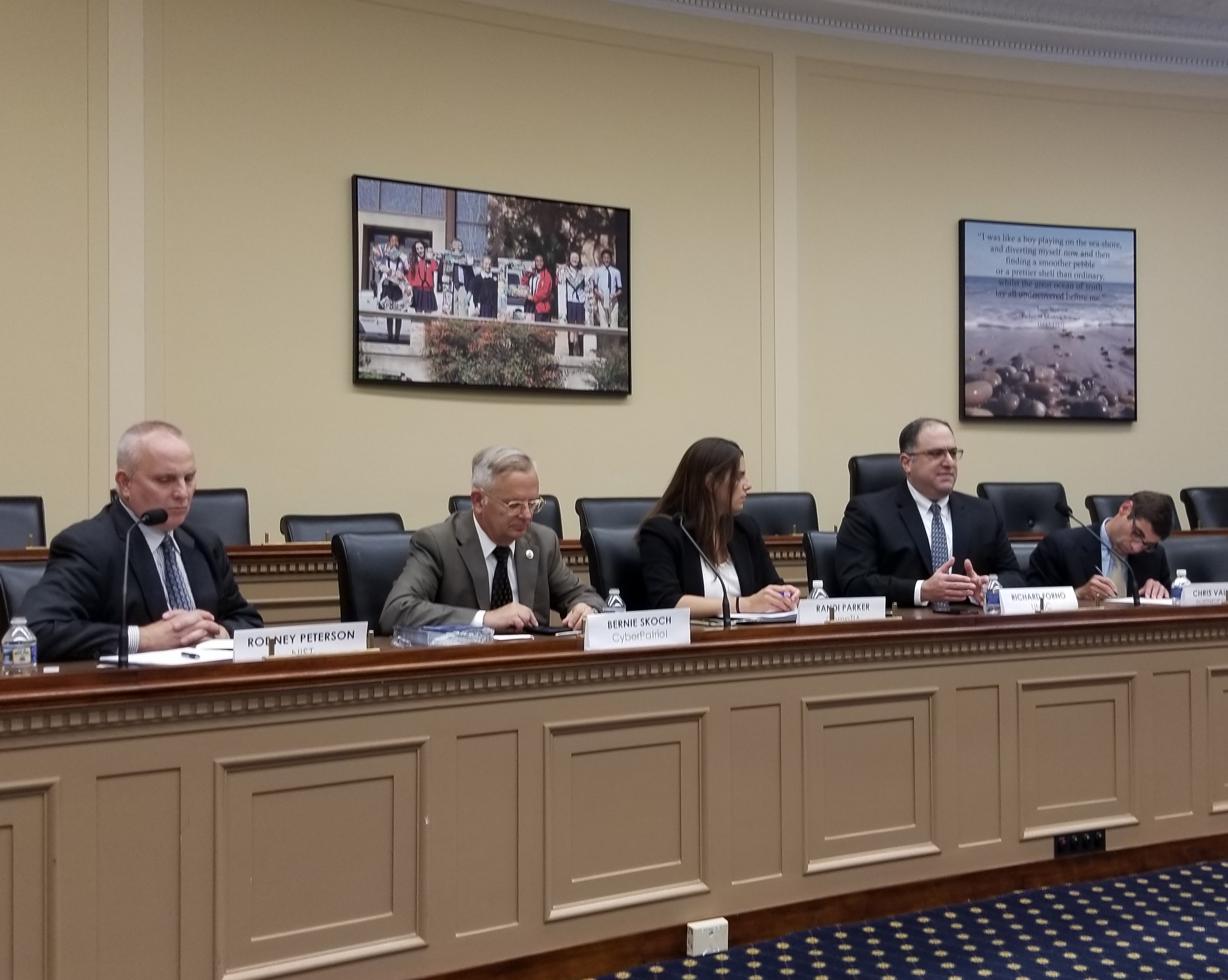 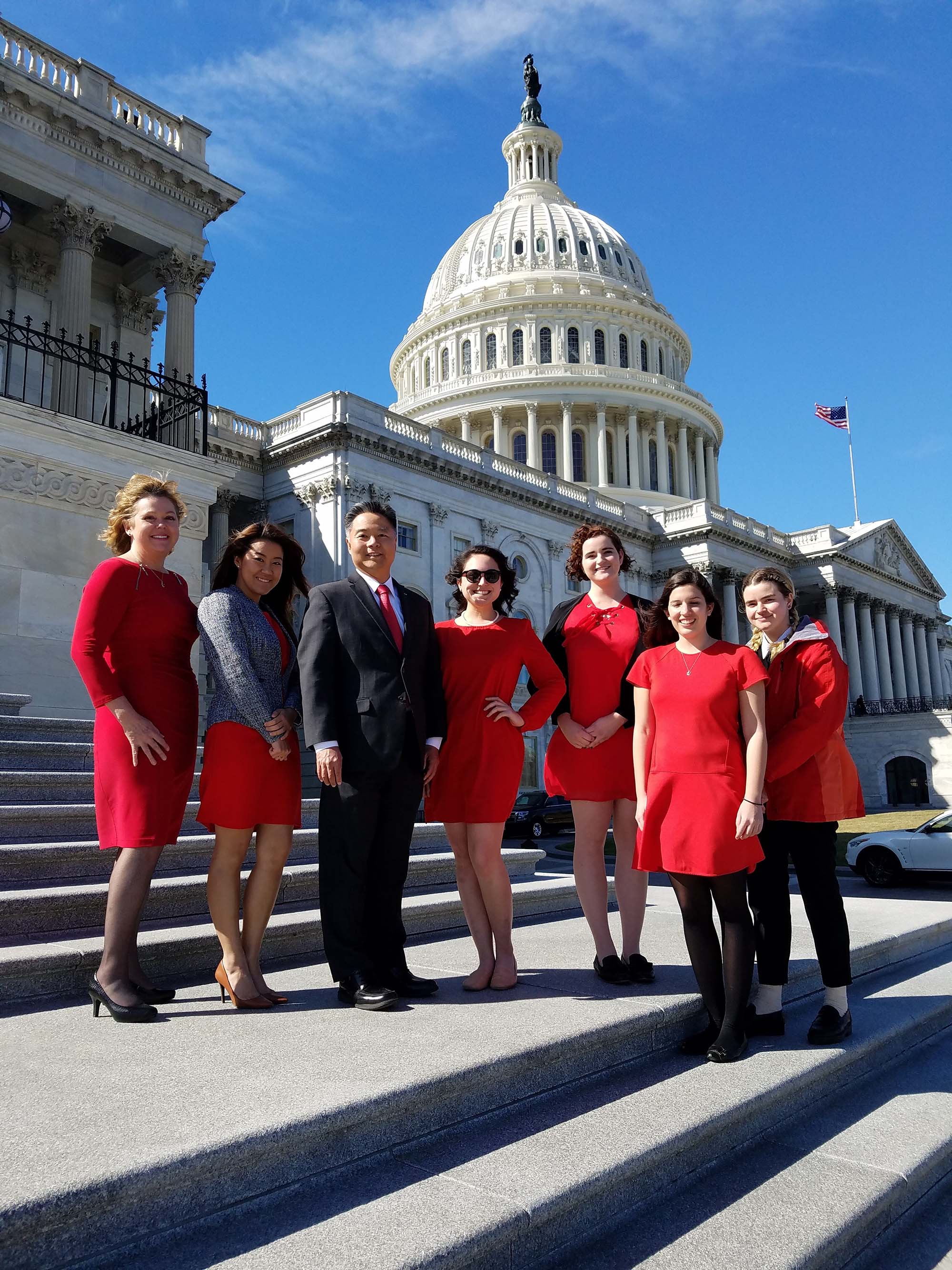 Working for a Congressman from California, with Hollywood as part of his district, gave me the opportunity to occasionally rub elbows with celebrities. The ladies in our office became celebrities on International Women’s Day when we got our picture taken with the Congressman for The Washington Post. That red dress will forever remind me of my year on the Hill (I’m the one at far left).

Working on the Hill during 2017 was an experience of a lifetime. This was the year of massive health protesters working tirelessly to save their health care coverage provided under the Affordable Care Act. I saw children and citizens with extreme disabilities riding through Congressional halls in their motorized wheelchairs. I was humbled by their focus and drive and learned the importance of advocacy.

My year on the Hill taught me civics lessons that you read about in textbooks, but never truly appreciate until you live them. The meaning of laws and Constitutional establishment of the many pillars of government providing checks and balances became crystal clear to me during 2017. I also saw the power and importance of a free press for maintaining an open and transparent government. As I return to my home agency, I have many wonderful lessons and memories to make me proud to be an American living in a free democracy.

To answer my original question of what happens when you send a Department of Defense cybersecurity expert to Capitol Hill – you get a slew of Cybersecurity legislation and collaboration between Executive Branch, Legislative Branch, academia, for profit and the non-profit community. You get the value of new progressive ideas that generated new legislation for future generations to come. And you get a Cyber Ninja – me! – who developed a whole new appreciation of the patriotism and passion of American people, from every state in this great nation, and their passion for issues requiring policy changes to better their lives.

The opinions expressed are those of the affiliate and do not reflect those of NSA/CSS.

Diana Parr ’85, information systems management, was a Brookings 2017 Legis Congressional Senior Fellow. She is currently employed at NSA as a Cybersecurity Leader and is also an Adjunct Instructor at the University of Maryland Baltimore County (UMBC) in their Cybersecurity graduate program.