I ride UMBC Transit to work every day.

Yes, I’m likely helping reduce UMBC’s carbon footprint by doing so. But what I have found over the five years that I’ve been a rider is that the feeling of virtuousness is outweighed by the camaraderie I’ve found with my fellow riders.

For a little over four years, I battled the commute by DC Metro and MARC train with the hardy group of souls who ride the Halethorpe Line and the BWI/MARC Line. Students, faculty and staff together – braving the blustery winds at the Halethorpe MARC station, or the crowded trains and inevitable commuting delays.

When I moved closer to UMBC late in 2012, I switched over to the Catonsville Line and the Arbutus Line. These lines primarily serve the off-campus housing near the university – and the eager chatter of students in multiple languages reminds me not only how diverse our campus is, but just how far many people travel to get a UMBC education.

This issue of UMBC Magazine takes sustainability as its theme. One thing that has surprised me as we have assembled this issue is how hard the university is working to overcome the history and geography that made UMBC a primarily commuter campus through much of its existence. The campus is becoming more of a community as its residential student population grows. There are more ways than ever to get to campus without being one person in one car. And the university is also coordinating efforts to become more ecologically friendly in how we dispose of our waste, heat our classrooms and offices, and construct new buildings to more exacting environmental standards.

Another surprise has been the scope of research on campus devoted to sustainability. We’ve tackled some of this research in previous issues of UMBC Magazine, but had no problem filling more than half of the space we normally allot to features with stories about the ways that UMBC faculty are pondering just how to make our city and our planet a greener place.

The magazine that you hold in your hand is also playing its part in UMBC’s sustainability efforts. Before the first issue of UMBC Magazine was published, the university decided that it would be printed on paper that was at least 50 percent postconsumer recycled (Roland Cascades Opaque). According to our suppliers, the use of this paper preserves trees (139), cuts down on the creation of solid waste (6,542 pounds worth) and prevents the release of 12, 882 pounds of net greenhouse gases.

We hope you enjoy this issue of UMBC Magazine! And perhaps enjoy it more knowing the efforts we are making to harmonize its production with UMBC’s goals to be a greener university. 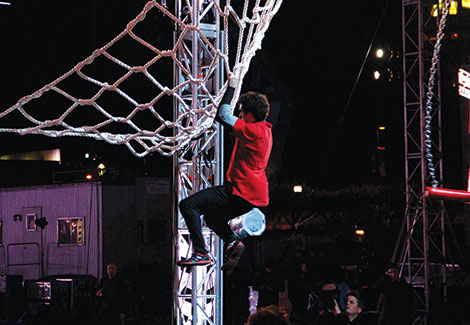