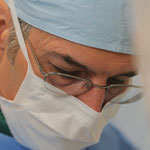 Blair. P. Grubb ’76, biological sciences, is a distinguished professor of medicine and pediatrics at the University of Toledo’s College of Medicine. He was also a recipient of UMBC’s Alumni of the Year Award in 1994. But Dr. Grubb – who is one of the world’s foremost authorities regarding syncope (or “fainting”) and disorders of the autonomic nervous system – is also a widely published essayist. UMBC Magazine asked him to share his thoughts on the confluence of medicine and literature.

In the midst of the current debates on the future of American health care, a much less discussed crisis has been brewing: the growing estrangement of physicians from the very people they seek to treat.

As a doctor, I know well that modern medicine can do more than ever before to diagnose and often cure illness. But the patients we treat report an ever increasing sense of alienation and disenchantment with those who provide medical care.

And the patients are not alone. Physicians also report a growing sense of dissatisfaction with the current practice of medicine. This disenchantment is underscored by some grim statistics: among professions in America today, physicians now boast the highest rates of suicide, divorce, alcoholism and substance abuse. It is estimated that 300 to 400 physicians in the United States take their own lives each year, a number that is only projected to grow in the near future.

While the cause of these problems is both varied and complex, I have come to feel that part of the reason lies in modern medicine’s progressive dehumanization of both patients and the physicians who serve them. Once sacred bonds linking physicians and patients are now increasingly disrupted by market forces touting the “bottom line.”

To some extent, I believe we have forgotten that medicine is neither a science nor a business; rather it is an art that uses science and business as tools to aid in healing, and not as ends unto themselves. The increasing distance between medicine and the humanities only serves to aggravate the aforementioned issues. For if we think of the humanities as those activities that most reflect what it is to be a human, it could be argued that medicine is one of the humanities’ most prominent fields. What is more human than the act of healing? A patient is not merely a broken machine but rather a unique individual shaped by his or her family, environment, heritage and culture.

Over time, I began to realize that every patient tells a story, a unique narrative that is critical to understanding not only his or her illness, but how that illness had affected his or her life. I also came to realize that sharing in each patient’s story deeply enriched my own life. I began seeing myself less a mechanic and more a partner in the healing process. More and more, I saw my patients’ struggles as reflections of the human condition itself, and our confrontations with fear, hope and mortality.

I began to write down these experiences in stories that tried to convey the lessons that I had learned from each patient. It was a process made difficult by an almost complete lack of exposure to the humanities throughout the entirety of my previous education.

Yet as I continued to write these stories about the patients I had treated and the “nobility of the spirit” that they showed in their struggles with illness, I found myself carried into the great repositories of wisdom found in literature, poetry, art and music. I discovered the Bible, the Divine Comedy, Maimonides, Camus and Buber. I listened to Mozart, Verdi and Glass, and stared in wonder at the works of Turner, Michelangelo and Rothko.

It was an exploration accelerated by my own confrontations with severe illness and loss, and those of my family.

What I have found in the humanities is a quest to understand the depths of the human condition, and a willingness to venture into places where pure science cannot go. No one turns to their chemistry book in times of deep emotional crisis.

I have come to believe that one way to address the growing frustrations of both physicians and patients is to reconnect medicine with the humanities, and allow both parties to the act of healing to see themselves more clearly as part of the ongoing human drama in which we each play a role. The humanities can help train the keen eye of the artist on the problem of illness, and aid in acknowledging the shared humanity of both those who suffer disease and those who seek to help them.

If we achieve this reconnection, a greater number of physicians can once again see ourselves not as mere biomedical technicians, but rather as “healers” in the truest sense of the word.