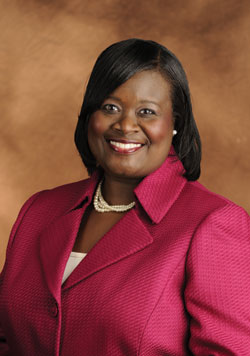 Sometimes a small act of kindness can lead to big results.

One year into her undergraduate education, Kara Freeman ’91, engineering and information technology, was doing well at UMBC. Unbeknownst to her, however, her parents were fretting how to pay for the next semester. A grade school principal of Freeman’s contacted then-vice provost Freeman A. Hrabowski, III, to ask for help.

UMBC’s future president did not know Freeman or her family personally back in 1987, but found time to speak with her mother and offer useful financial assistance tips. The family secured the necessary aid for Freeman not only to finish but to excel as a scholar. Freeman has not forgotten Hrabowski’s intervention in her success – and it has had a big impact on her life. Freeman is now the vice president of administration and chief information officer for the American Council on Education (ACE). And part of her duties at the council are to help universities such as UMBC best use technologies to help their students.

A Washington, D.C. native, Freeman was the daughter of a firefighter father and a mother who worked as an equal opportunity specialist for the U.S. Department of Agriculture. She and her four siblings inherited their father’s strong work ethic and their mother’s never-say-die attitude and appreciation for helping others.
Both parents also emphasized the value of education. “They let us know how important school was and that we should stay on top of it,” she says.

Freeman started as a computer science major, but quickly migrated to information systems management, where she could focus on applying her people skills and avoid the long hours of solitude that programming often requires.

She also attributes much of her success to UMBC’s cooperative education program, which helped her land internships with IBM and General Electric: “When I graduated, I had work experience. That put me way ahead of anyone else.”

Her first job after graduation was as a systems analyst with AT&T, thanks to her tireless efforts in petitioning the company’s recruiters at job fairs. She followed this with stints working for WorldCom and MCI and, later, a consultant job for defense contractor Lockheed Martin.

In climbing the corporate ladder, however, Freeman has made a point of reaching back and helping others on the same climb. It’s a trait she picked up at UMBC, when she herself was seeking a mentor. As Freeman tells it, she and a friend never made it to a campus classroom where they were to be assigned a mentor, and instead wandered into a room filled with aspiring young mentors.

To this day, she remains in contact with her own protégée from that program, a then-nine-year-old inner-city student (who is now 30 and successful in the business world herself). And Freeman continues to participate in a variety of mentoring and education programs, including UMBC’s Center for Women and Information Technology (CWIT).

“I just have a strong need to make sure that others can learn from what I have learned,” Freeman says.

Freeman wasn’t looking for a new job when her sister pointed her to an information technology (IT) management position that had opened up at the American Council on Education. But she looked into the prospective job that offered, she observes, “a weird connection between what I love to do and what I do for a living.”
The council’s mission is to establish a national and international agenda for postsecondary education and training, and technology now plays an ever-increasing role in this effort. While part of Freeman’s job involves managing and making strategic decisions about the council’s technology, she sits on a board that advises ACE president Molly Corbett Broad on larger issues.

“When decisions are being made about any particular area, the technology needs to part of that discussion,” says Freeman. “In many cases, the [IT] folks are not at the table. Here, I can influence the decisions.”

Another part of her job involves understanding how colleges and universities use technology to help better prepare their students. Computers are becoming a core part of business and academia, yet higher education institutions can vary wildly in how they make full use of new technology. Her insights help ACE assist its members in the best use of these technologies.

Earlier this year, at ACE’s annual meeting, Freeman presented a panel about how universities can use technology. “For me, it is exciting,” she says. “Sometimes you think of IT as keeping the email on. But in this day and age, it is really much more strategic.”