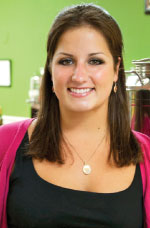 Some students studying abroad fall in love with a place. Maggie Lebherz ’08, modern languages and linguistics, fell in love with some new tastes during her semester at the University of Salamanca.

“Tasting fresh olive oil added an entirely new dimension to it, and I also learned about the health benefits of olive oil,” she says. “I had never had true balsamic vinegar, and even the best ones on the market here could not compare to what I had in Spain.”

The love affair that Lebherz developed with balsamic vinegar and fresh olive oil while studying in Spain has translated into a most unusual business venture: Lebherz Oil & Vinegar Emporium (LOVE) in her hometown of Frederick.

After graduating from UMBC, Lebherz returned to Frederick, working as a translator for the local school system. However, when a redistricting left her with a job as a secretary, she began to consider opening her own store focused on the two products she loved: olive oil and vinegar. Many people thought she was nuts to build a business on two products. But, as Lebherz says, “I told people that Baskin-Robbins ‘just’ sells ice cream.”