Renato “Renny” DiPentima, Ph.D. ’84,  policy sciences, had a distinguished career in the Social Security Administration, where he rose to the rank of deputy commissioner and served on numerous governmental task forces and advisory boards. He was also selected by Government Computer News as the Government Executive of the Year in 1993. After leaving Social Security, DiPentima was president and CEO of SRA International, a company he helped build into a leading provider of information technology services and solutions throughout the federal government. DiPentima was also the recipient of UMBC’s Alumni of the Year Award in 2004.

UMBC Magazine asked DiPentima – the first recipient of a Ph.D. in the program – to reminisce about his experiences in one of UMBC’s signature fields of advanced study. 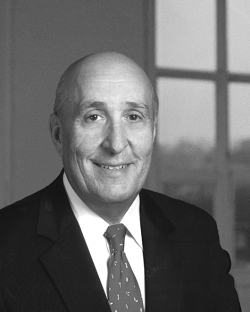 At the time I entered the program, I was a senior manager at the Social Security Administration (SSA) in Woodlawn, and had responsibility for the agency’s advanced systems.

Five years earlier, SSA had inherited the welfare programs for the aged, blind, and disabled across the United States. This implementation and transition from 50 states and four territories had been fraught with problems and major policy and systems failures. Having witnessed it firsthand as a participant in its planning and implementation, I became increasingly more interested in the interplay between policy and technology and why large programs failed.

Since UMBC’s public policy Ph.D. program was still at its beginnings, decisions had to be made by department chair George LaNoue and the faculty about field exams, comprehensive exams and doctoral dissertation committees. It was exciting to be a part of that environment of creation. The faculty was committed to establishing a top class Ph.D. program – an effort which, in retrospect, clearly succeeded.

As I completed my course work and qualifying exams, my attention naturally focused on my dissertation. I continued to be intrigued by the question of what happens after Congress passes a new program via legislation, and what assessments are made by Congressional committees such as the House Ways and Means Committee, or by the Congressional Budget Office, about whether the program is meeting expectations.

Gradually, my dissertation subject took form around the hypothesis that new programs and projects, when measured against original expectations, would largely be judged as failures. These failures could be explained by very specific models, and those models, if understood and applied early on, could help prevent such breakdowns.

After two years of working each weekend for about 10 hours a day, my dissertation was completed, submitted, and successfully defended before a committee that included an economist, a sociologist and a political scientist. The champagne was opened to celebrate the first graduate of the UMBC public policy Ph.D. program. My graduation that June was attended by my wife and our two young daughters, indeed a proud moment.

One doesn’t always get to practice what one preaches. Shortly after earning my degree, however, I had the opportunity to do so. As associate commissioner of the SSA, I was asked to personally oversee the agency’s program to modernize its huge claims processing systems, policies, and administration – a program that was a prime example of the very type of failure-prone programs that I had intensely studied and theorized about, and about which I had written to obtain my degree.

In my doctoral dissertation, I identified and constructed four models that purported to explain program and project failure and also identified specific measures to mitigate the risks of failure. Setting out to apply these risk mitigation measures, the SSA modernization team’s organizational structure and communication channels were aligned with these measures, along with the project’s design of decision and policy mechanisms. Appropriate testing and piloting schemes were also put in place.

Within 18 months, the deployment of new systems and policies to 1,400 SSA offices and six large processing centers was successfully underway. Today, all Social Security Administration offices are fully automated, with systems compliant with policies.

From my perspective as the program manager, the course work, interaction with UMBC faculty, and theories developed in my doctoral studies were directly related to the success of the modernization program.

Looking back, the public policy program offered me a particularly valuable opportunity, given its close proximity to Washington, D.C. and even closer proximity to the Social Security Administration and to the Centers for Medicare and Medicaid (CMS). It continues to offer that same opportunity to many others in government who have followed me in graduate studies at UMBC.