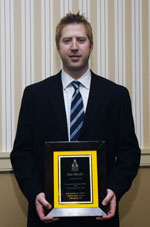 Dan Marohl ’01, geography and environmental systems, has been chosen as a captain and co-captain of Baltimore Bombers lacrosse by his teammates, the Baltimore Sun reports.

Marohl, who plays forward for the Bombers, previously played with the Ottawa Rebel and the Philadelphia Wings of the National Lacrosse League, as well as the Minnesota Swarm, the Sun writes. Formed in 2012, the Baltimore Bombers will compete this year as part of the North American Lacrosse League.

A member of UMBC’s Athletic Hall of Fame, Marohl was a two-time All American for UMBC in 1999 and 2000 and UMBC’s Outstanding Male Athlete in 2000. He also competed in the North-South All Star game in ’00 and is a member of UMBC’s Lacrosse’s All-Time team. The Edgewater, Md. native is currently fifth on all-time scoring list with 103 goals (11^th ) and 89 assists (third). He competed at both attack and midfield and led UMBC in goal-scoring with 34 as a freshman in 1997. Marohl was a member of the 1998 and 1999 NCAA Division I playoff teams. He produced a pair of 50-point seasons, and was just one of four UMBC Division I players to reach that mark. His brother Steve Marohl ’93, history, is also a member of the UMBC Athletic Hall of Fame for lacrosse.