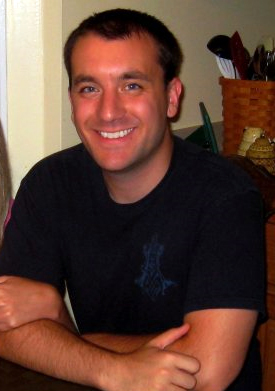 Confused about how an American democracy works? You are not alone.
A new Web site – www.USDemocrazy.net – designed by Economist magazine cartoonist Kevin “Kal” Kallaugher, artist-in-residence at UMBC, aims to demystify and explore America’s crazy 50-state democracy in a fun and engaging way.
Behind the scenes, recent alumnus Jamie Nola ’08, visual arts, spent the last year turning Kal’s black and white drawings into a colorful, interactive web experience, where talking fish discuss the economy and banners promising “crazy factoids” and “political mumbo-jumbo” are all the norm.
“It’s really cool,” said Nola, who joined UMBC’s Imaging Research Center as a student intern in the fall of 2007 and who now works there full time. “It’s exciting to see it up and getting some attention.”
An Interactive Way of Teaching
Designed and hand-drawn by Kal for the IRC, USDemocrazy.net was built and researched by an interdisciplinary team of UMBC students, including visual arts, web design and social sciences majors.
The site features in-depth portraits of all 50 states through exclusive Kal animations, offbeat trivia and factoids and local color from experts in each state. An animated “Uncle Sam” explains idiosyncrasies of America’s democratic system, such as the Electoral College. On the USDemocrazy.net blog, Kal, along with students and faculty from UMBC, will follow America’s electoral process through the presidential race and into the next administration.
On-the-job Training
For Nola, whose future interest lies in computer game programming, Kal’s project was a chance to hit the ground running. He took a course in web interactivity in spring 2007, and was recommended for an IRC internship thanks to his quick understanding of the web animation program Flash.
Under the tutelage of former IRC worker and UMBC alumna Bonnie Crawford-Kotula ’08, M.F.A., Nola learned how to turn Kal’s drawings into the back-end code that would allow for animation and interaction on the front end of the site. He also got plenty of first-hand experience at working with clients.
“It has been a great experience,” said Nola. “We went through so many prototypes. I really learned a lot over the last 13 or 14 months.
The interactive site is compiling first-hand portraits of each state from local experts in history, politics, journalism and humor through its “Crazy Talk” state survey. Click here to take the survey. A true work in progress, the site changes often as Nola receives updates and new features from the site researchers.
“They’re still gathering information,” he said. “We’ve got 32 states done, and 18 to go. There’s been a crazy push over the last month to get as much done before the election as possible. It’s been pretty exciting.”
Visit USDemocrazy.net to view Kal’s Mission Statement video.
Originally posted October 2008