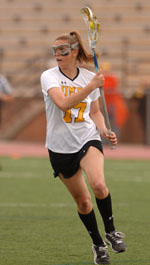 “Tony and I are very excited for Jen and her new adventure,” co-head coach Amy Appelt said. “It was always great to compete against her when she was coaching at Johns Hopkins and we are very proud that a fellow Dawg is taking her career to the next level. We wish her the best of luck from the Dawg family.”

Kasper O’Brien competed with the Retrievers from 2003-07, redshirting her junior season after suffering a season-ending knee injury, and concluded her career with 84 goals, 45 assists and 129 points. The two-time captain earned America East All-Conference Second Team honors as a junior and a senior.

The Eldersburg, Md., native spent the last five seasons as an assistant coach at Johns Hopkins University, working primarily with the Blue Jays’ offensive efforts. Kasper O’Brien helped JHU to a top-40 national ranking in goals per game in each of the last five campaigns.

Kasper O’Brien began her coaching career at Stanford in August of 2007 as an assistant coach and was elevated to co-head coach early in the 2008 season. She helped guide the Cardinal to a 12-8 record and a fourth straight Mountain Pacific Sports Federation Tournament Championship.

A version of this story originally appeared on UMBCRetrievers.com.