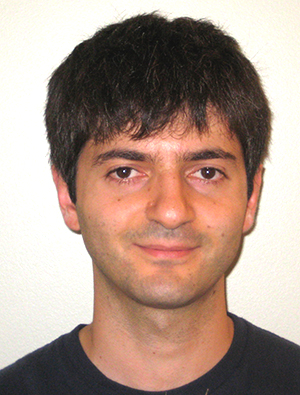 A Computational Biologist and Dartmouth professor, Alumnus Gevorg Grigoryan says his undergraduate research at UMBC was crucial to his success.

Kids typically see college as a chance to get away from their parents. That wasn’t the case with alumnus Gevorg Grigoryan ’02, Computer Science and Biochemistry, who did research with his dad in UMBC’s Computational Photonics Lab as an undergraduate. In 2000, the pair co-authored a paper proposing a new visualization technique for wave transmissions that uses color to represent amplitude and phase information.

Now an assistant professor of Computer Science and an adjunct assistant professor of Biology at Dartmouth College, Grigoryan stresses the importance of doing research early on. As an undergraduate, he worked in not one, but three, different research labs at UMBC: the Computational Photonics Lab, the VANGOGH Lab, and Dr. Daniel Fabris’ Mass Spectrometry lab.

“It was very easy for an undergrad to get involved in research [at UMBC],” says Grigoryan. “It’s not like that everywhere.”

Working in labs gave Grigoryan essential experience that shaped his career path. When it was time to pick a major, he knew that he wanted to do research like his dad, Vladimir Grigoryan, a Physicist who was working as a Research Scientist at UMBC at the time.

Grigoryan switched from Physics to an ambitious double major in Computer Science and Biochemistry when a professor told him about the emerging, interdisciplinary field of Computational Biology. Combining the principles of biology with computing techniques, the new field dealt with simulating and studying biological systems on the computer.

After graduating from UMBC in 2002, Grigoryan went to MIT for his Ph.D. in Computational Biology under Dr. Amy E. Keating. Later he completed his Post Doc at the University of Pennsylvania Medical School under William DeGrado. His research has focused on examining proteins in order to 1) understand their structure, and to 2) use that understanding to design new proteins that can do things like cure disease.

The analysis and design of proteins is what’s being done in Grigoryan’s research lab at Dartmouth. Specifically, Grigoryan and his students are looking at how protein structure dictates protein-protein recognition and the structural mechanisms of information transformation by allostery. In an interesting twist, Grigoryan now has undergraduate research assistants of his own.

As for collaborations with his dad, Grigoryan says that these days, formal collaborations are hard because of distance; Grigoryan works on molding minds in New Hampshire while his dad works at Ciena Corporation in Maryland. Nevertheless, that doesn’t stop them from having heated scientific discussions over the phone, he says.