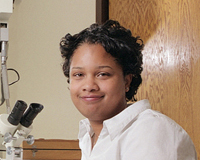 Shahza Somerville is a Ph.D. student in UMBC’s Neurosciences and Cognitive Sciences Ph.D. Program and a Meyerhoff Graduate Fellow.

Neuroscience is a relatively new area and the more I read the more I realize how much research needs to be done. I feel like its my calling to advance this field that could help so many people. Im interested in both biology and psychiatry, so to be able to merge the two is wonderful, says Shahza Somerville, a Ph.D. student in UMBCs new Neurosciences and Cognitive Sciences Ph.D. Program (NACS) and a Meyerhoff Graduate Fellow.

A graduate of Morgan State University, Somerville was impressed with the opportunities her sister Karla received at UMBC as a Meyerhoff Graduate Fellow. (Karla graduated in December with a Ph.D. in chemistry.) Fellows receive tuition, yearly stipends and health benefits and are mentored by faculty who are leaders in their fields. Before her first semester, Somerville completed the NIH Meyerhoff Summer Bridge Program for Graduate Fellows, which she says was especially helpful as she began her UMBC career. Because I took a class and completed one lab rotation during the Summer Bridge Program, by the time my first semester at UMBC began I had already met other students and started my research. I felt like I was part of the campus and had a sense of direction about my work, she explains.

Somerville says she chose UMBCs tri-institutional NACS Ph.D. program because she could also access courses at its partner schoolsthe University of Maryland Baltimore (UMB) School of Medicine and the University of Maryland, College Parkand take advantage of a wide range of research and training opportunities. UMBCs campus is in close proximity to the Maryland Psychiatric Research Center (MPRC), part of the Department of Psychiatry at UMB. MPRC faculty offer NACS students relevant coursework and graduate training opportunities.

Somerville is conducting research on schizophrenia with Dr. Rosalinda Roberts at the MPRC. Studies show that there is a lower metabolism in the frontal lobe and striatum of schizophrenic patients that has been linked to auditory hallucinations. Somerville is looking at the morphology of mitochondriaenergy producing organellesto see if it is altered in schizophrenic postmortem tissue. She hopes to present a paper on her research at this years Society for Neuroscience conference, which draws scientists from around the world.

She is also interested in pharmaceutical research and neurodegenerative diseases such as Alzheimers and Parkinsons, as well as teaching. There are a lot of career decisions to be made, but Somerville says shell focus on whatever way I can make the greatest impact.