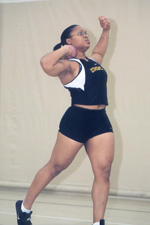 Former UMBC track and field standout and NCAA champion Cleopatra Borel ’02, INDS, is competing in her third Olympic Games for her native Trinidad and Tobago, once again in the shot put. Borel placed 17th in 2008 in Beijing after finishing in 10th at the 2004 Games in Athens.

“We are very proud of Cleopatra and all that she has accomplished in her career,” said UMBC head track and field coach David Bobb ’02, health administration and policy. “We wish her the absolute best as she continues to represent Trinidad and Tobago and UMBC is the best possible way.”

Borel qualified for her third Olympic Games back in June when she bested the field at the Trinidad and Tobago Olympic Trials with a toss of 17.98m (59’0”).

“A lot of the credit can go to former throws coach Brian King,” Bobb said. “He really worked hard with her and set her on this path.”

The 2012 Summer Olympics in London open on Fri., July 27 with the Opening Ceremony and continue through Sun., Aug. 12. The women’s shot put competition will take place on Wed., Aug. 6 and will be held at the Olympic Stadium.