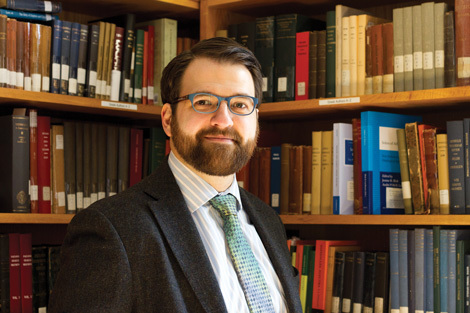 “Roman poets were a lot like rappers,” observes Joseph Howley ’06, ancient studies, who is an assistant professor of classics at Columbia University. It’s the kind of observation – presented as an almost offhand remark – that typifies Howley’s approach to the discipline.

As a scholar particularly attuned to the unexpected, Howley thinks the modern fixation on Roman poetry, as opposed to other classical texts, has tended to constrict our perceptions of Roman experiences. His current research on different aspects of the book as a physical and technological object in ancient times sets out to radically broaden that understanding.

“A country singer won’t generally sing about what a good singer he is, but rappers will do that,” Howley explains, “or they will elaborate on how bad a rapper some rival might be. There’s quite a lot of that in Roman poetry.” The analogy doesn’t end there, either: “The other thing is that the Roman poets use so much allusion, which might have its best analog in contemporary rap, especially with sampling and so forth, which creates a new text that is emerging from overtly identified elements of an older text.”

Yet privileging Roman poets over other classical authors, he continues, may narrow our knowledge about the way the ancients experienced books as physical objects. “What these poets really want to talk about is how true they are to their form, which is fine,” he says, “but that doesn’t tell us anything about what the lived experience of the average Roman book reader was like.”

Howley’s investigations take in a broad range of Roman literary experience to examine its convergences and divergences with the contemporary world. “My new project is trying to gather up evidence to look at what are Romans really saying about books as they encounter them in their daily lives – as they are using them in all kinds of ways, as props, as fashion accessories, and, of course, as a medium for knowledge,” he explains, “It’s a lot like how we talk about computers and tablets today. This is the main medium through which they are encountering knowledge.”

After graduating from UMBC, Howley earned an M.A. (2007) and a Ph.D. (2011) from the School of Classics at the University of St. Andrews in Scotland. After a year as a teaching fellow in Latin and Classics Studies there, he joined the faculty of Columbia University in 2011.

Howley says his UMBC experience was vital to his subsequent academic achievements. “I had the marvelous experience at UMBC of reading so much Greek and Latin with professors who were excited to read Greek and Latin,” he recalls. He singles out professors Walter Sherwin, Jay Freyman, Rudolf Storch, Marilyn Goldberg and Carolyn Koehler for special praise. “I was exposed to a broad cross-section of the classical canon, including biblical Greek and biblical Latin.”

UMBC’s Honors College was another key element in Howley’s undergraduate experience. “I really benefited from being in the Honors College,” he recalls, “where I got to take a lot of very advanced literature courses really early on in my education. It kind of blew my mind.”

UMBC’s ancient studies department gave Howley the essential building blocks for a dynamic academic career in the classics. Still, like many other classicists, he worries about the future of the discipline. “Perhaps playing the game of listing our deliverables” is a dead end, he argues. “History and language and culture are disciplines inherently worth studying, and we shouldn’t have to prove their worth to other disciplines.”

Howley quickly adds that this stance “doesn’t mean that we don’t have to keep making the case for ourselves, because we do.” And he is confident a strong case can be made.

“The Athenian, and especially, Roman, world was one that confronted the interconnections of multiculturalism, the challenges of globalization, and a crisis of information overload,” he observes. In a remark that illustrates much about his own work, he concludes that “we have to find what it means to be a 21st century classicist.”

Read more from the latest issue of UMBC Magazine.