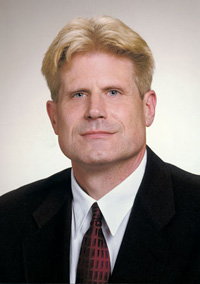 When was the last time you thanked a teacher?
As morning bells begin to ring in a new school year, Brad Engel ’89, B.A. American studies, cert. secondary education, is doing his part to make sure teachers get some well-earned pats on the back. His new book, “T.E.A.M. (Thanking Educators Across Maryland),” features 300 thank-you letters from parents to teachers who have changed their children’s lives.
“My vision for this project was to let teachers know they are truly appreciated,” said Engel, Maryland’s 2005 Teacher of the Year, who recently was promoted to Assistant Principal at Kent Island High School on the Eastern Shore. He has taught history there for 17 years.
“T.E.A.M.” is just one of the results of Engel’s tenure as Teacher of the Year. Since accepting the honor last October, he’s also spoken at more than 100 schools, conferences and other venues, and been congratulated personally by everyone from Maryland State Superintendent of Schools Nancy S. Grasmick to President George W. Bush.
“It has been a very busy year,” said Engel, who came to UMBC as a student while working as an instructor for the Arc of Baltimore, which offers programs and services to people with mental retardation. Although he enjoyed teaching adults all of the useful life skills they would need to make it on their own, he longed to teach and mentor younger students.
“I wanted to work in the high school setting so that I could be a real role model to the students,” he said.
Over the years, he has learned that actions speak louder than words. In addition to chairing the Social Studies department and acting as Leadership Coordinator at the school, he also served on the School Improvement Team and chaired the Middle States Steering Committee. Engel also chairs the school-wide Mentor Advisory Program, where he advises 100 student leaders, and wrote and published “The Four Challenges of Leadership,” a textbook for the program, in 2003.
Although Engel didn’t always see himself as an administrator, his conversations with teachers across the state over the last year changed his mind.
“It completely changed my perspective of what administrators do,” he said. “It showed me that you really are still an educator no matter what you do.”
As a new vice principal, Engel looks forward to working with students in areas of discipline and leadership. He feels strongly that students need individualized attention, and that students must be treated with dignity and respect – something he has always tried to do in the classroom.
“You have to listen to them and help them understand that they are valuable members of society,” he said. “It’s almost magical when you can see a child turn around. It happens one student at a time.”
“T.E.A.M.” will be released within the Maryland school system on October 8. To read passages from the book, visit “T.E.A.M.” online at www.thankyou.ws.
– Jenny O’Grady
Originally posted September 2005