Hall cites “UMBC’s commitment to the comprehensive student-athlete experience” as one of the reasons that he wanted to become a Retriever.

“UMBC is an institution that sees academic success and athletics success as not mutually exclusive,” he says.

Under Hall’s tenure, UMKC experienced plenty of success, which propelled the school to a place in the prestigious Western Athletic Conference (WAC) starting on July 1. UMKC also notched conference championships in men’s soccer, men’s golf, men’s tennis and softball during his time at the university. Before taking the position at UMKC, Hall was associate athletic director for development at Kent State University.

Leadership in larger circles of college athletics has also been part of Hall’s career in college athletics. He is serving a three-year term on the National Association of Collegiate Directors of Athletics’ Division I-AAA Executive Committee and he also serves on the NCAA volleyball rules committee, as well as the NCAA committee on women’s athletics.

Hall was chosen by a search committee chaired by UMBC’s vice president of information technology Jack Suess ’85, mathematics, and ’95, M.S., operations analysis. His appointment builds on substantial momentum in the university’s athletics program, which has won championships in seven different sports over 10 seasons in the America East Conference. He succeeds Charles Brown, who retired June 30, completing a 24-year tenure that has elevated both the Retrievers’ athletic and academic performance. 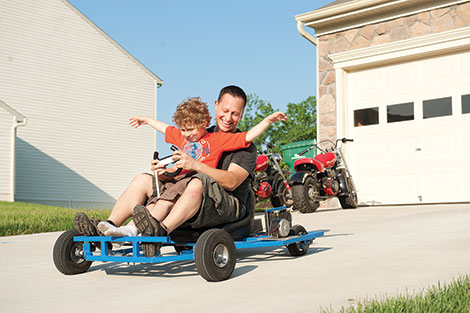 UMBC has a reputation as a place where it’s cool to be smart. And one alumnus has gone out and confirmed it on national television.

Back in July,  Corey Fleischer ’05, and ’08, M.S., mechanical engineering won a season-long engineering-based reality show on the Discovery Channel called Big Brain Theory on a final episode that featured a cameo from Apollo 11 astronaut Buzz Aldrin and the destruction of a 34-foot bridge.

“The most exciting outcome is having my kids think their dad is ‘the next great American innovator’ – as I was labeled on the show,” says Fleischer, who is a father of two and a senior mechanical engineer at Lockheed Martin.

Fleischer won $50,000 and a one-year contract to work with WET Design, which specializes in creating innovative water-based environments. Working in teams over an eight-week competition, ten brainy contestants faced design and execution challenges to see whose ideas would rise to the top.

“I was just hoping not to be the first person eliminated,” he says. “Then once I got out there and saw the people I was working with and the magnitude of the challenges I relaxed, and knew regardless of the outcome I was going to have a blast.  Winning the competition was just a bonus!”

Fleischer’s favorite moment was leading a team that designed a robot to compete in a foot race, throw a javelin and perform a long jump.

“I was very proud of what we created,” he says. “After our robot jumped 16 feet, we had cameramen, producers, technical advisers and all sorts of people high-fiving us and yelling ‘good job.’ ” 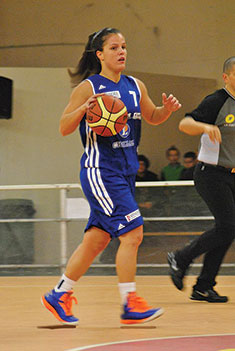 Former Retrievers basketball standout Michelle Kurowski’ 11, psychology made two trips as a child  to Poland – the country in which her parents were born. But her latest trip to Europe was a hoop dream come true.

Kurowski spent much of the past year as the only American player for Eveil Garnachois Basket Vendee – a team in France’s National Feminine 2 league. She was contacted by her agent in October, 2012 and told that the French team needed a player.

A shooting guard in college, Kurowski was forced to play point guard for much of the season. Though she arrived after the season had started, she and her teammates climbed from the lower rungs of the league standings all the way to the championship finals. Along the way, Kurowski averaged close to 20 points per game.

The team provided Kurowski with an apartment in the town of Garnache, which is located on the west coast of France. “It was a small town and there was a lot of farming,” she says. “I was interested to see the way people live. It is totally different there, from eating to everyday life…. It is slower paced there.”

Kurowski is weighing her options about a possible return. She also compiled a 4.0 grade-point average in her first semester of graduate school at UMBC and is eager to continue her studies in early childhood education.

The season in France did create some great memories. “It was a great experience,” Kurowski says. “The opportunity was there and I decided I would take it.” 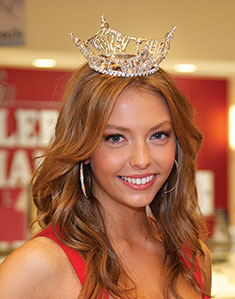 Pageant competition isn’t all pomp and primping. Just ask two UMBC students who have had recent success in these demanding contests.

Samantha Hawkins ’14, anthropology and interdisciplinary studies, has only competed for a year and a half, but she’s already a veteran of eight pageants.  Hawkins was recently named first runner up in the Miss Maryland America competition, and she will soon head to Illinois to compete against other national first runner ups for the National Sweetheart title.

“Looking back at when I first started college, I hadn’t really thought about my values or who I wanted to be,” says Hawkins, who has honed her piano skills and found a passion for community service in the process of competing. She also says she’s developed public speaking skills that are useful outside of the pageant circuit .

“I interviewed for my dream internship and I wasn’t nervous at all,” she says. “Once you get through a Miss Maryland panel, you can handle any job interview.”

Hawkins hopes the follow in the steps of Kasey Staniszewski ’14, media and communications studies, who was named Miss Maryland USA in November 2012 and recently won her way into the top 15 at the annual Miss USA competition in June.

It wasn’t Staniszewski’s first big win. She was named Miss Maryland Teen USA in 2009 and placed as third runner up at the Miss Teen USA national pageant that same year. Staniszewski is also an ambassador for Beyond Beauty for Girls –  a program founded by her sister Lindsay Staniszewski dedicated to building confidence in young women.