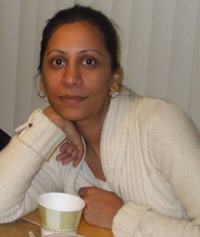 When Mabrooka Chaudhry immigrated to the United States from Pakistan in 1982 at the age of nine, she didn’t speak a word of English.
Twenty-five years later, she exemplifies the American dream. A U.S. history and world religions teacher in Howard County, Chaudhry recently was honored as a recipient of the Milken Family Foundation National Educators Award, which rewards public school teachers who have demonstrated superior educational talent and long-range leadership potential.
“It’s a very humbling thing,” said Chaudhry, who received the honor at the end of last semester in a surprise presentation by state schools superintendent Nancy Grasmick. “It’s hard to figure out: why me?”
Finding her Niche
Although she spoke no English upon her arrival as a fourth-grade student in the Howard County School System, Chaudhry learned it quickly and assimilated seamlessly into American life.
“I think children are very resilient,” she said. “They can adjust much faster than adults.”
From the start, her father encouraged her to pursue whatever career she liked, as long as she made a point of helping others. After graduating from high school, she entered UMBC both for its strong educational reputation and its proximity to her home. With a major in history and a minor in biology, she also remained active on campus, participating in the Commuter Student Association and the Muslim Student Association.
She had no intentions of becoming a teacher; in fact, she had considered going into the sciences, or possibly medical school. However, as time passed, the idea of teaching appealed to her more and more.
“I found teaching because it fit my personality,” said Chaudhry, who earned a degree in secondary social studies education at College Park following her graduation from UMBC, and who has taught at Atholten High School in Columbia for the last 10 years. “I’m definitely a people person.”
Exceeding Expectations
Chaudhry has definitely made a mark at Atholton High. About five years ago, a student approached her about the idea of teaching a course on the topic of the history of world religions, so she wrote up a curriculum that was approved by the school. The elective course has been filled to capacity by upperclassmen every year since.
In addition, during the 2005-2006 school year, 100 percent of Chaudhry’s students earned a score of at least 3 on the Advanced Placement American Government exam.
Chaudhry will receive the monetary award of $25,000 from the Milken Family Foundation sometime this spring. Some of it may go toward her current graduate studies at Loyola College, where she is pursuing her master’s degree in liberal studies.
Originally posted February 2008