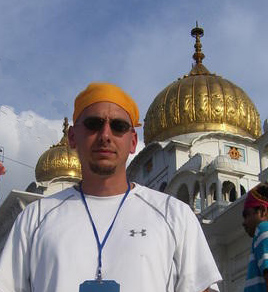 Kevin Mulroe is the type of teacher who would travel to the ends of the earth for his students. Literally.
A teacher of gifted and talented students in Howard County, Mulroe ’98, M.A., instructional systems development, was one of just 16 teachers from across the country to receive a Fulbright-Hayes Fellowship, enabling him to spend six weeks this summer exploring India in the name of education. Throughout his journey, Mulroe visited 23 different schools and learned a lot about what works – and what doesn’t – in math and science education.
“This falls into the category of ‘lifetime experiences.’ One of my goals in life is to have as many of those as possible,” said Mulroe, an adventurer by nature. “I know that these experiences make me a better teacher, person, a better everything.”
While a student at UMBC, Mulroe worked with disadvantaged students from Baltimore City and Prince George’s County through a graduate assistantship with the Shriver Center. This experience planted the seed for Mulroe’s interest in learning beyond the traditional boundaries.
After graduating, he began his career in education, teaching fifth grade in Howard County. Just three years later, he and his wife, Sorsha, took jobs teaching at an American school in Alexandria, Egypt. He later returned to Howard County schools, earning the title “Teacher of the Year” for the county in 2005. Over the years, he has used his travel experiences to develop classes in everything from speech and debate to Ancient Egypt.
Mulroe blogged the entire time he was in India, recording his thoughts and taking photos of the people of New Delhi, the holy city of Varanasi, and some overly friendly monkeys in Bhubaneswar. He plans to spend the next few months sharing his experiences with as many people as he can, including his students. One entry reads, in part:

Yesterday we visited an organization that seeks out talented students from disadvantaged situations and seeks to bring them into the best Indian schools for the purposes of becoming engineers and scientists. It was a great program and was special for me, because it served the role of a nationwide G-T talent search. This is partly how India is changing. They recognize that their clear advantage over the U.S. and Europe is simple….1.1 billion people. They have many more potential Einsteins, Gates, Hawkins, Edisons and Curies. They know this and are getting their act together in terms of developing talent on a grand scale. India is not going away. As I have said before India is hungry and its people are hungry and not in terms of how we used to think about India’s hunger. They are hungry for innovation, wealth, opportunities, ideas, investment, education, etc.

While his travels this summer focused specifically on ways the country identifies its gifted students, and how it promotes math and the sciences among them, as Mulroe learned, the six weeks taught him much more.
“Anytime you travel overseas to the Middle East or any developing region, I think you learn more about yourself than anything else. You really see what you are made of when you step out of your comfort zone,” he said.
“Knowing who you are is important, and I am a teacher,” he said. “If you think about what you want your child’s teacher to be, you would want a caring, well read, well traveled educator. That is what I strive to be to my students and my own children.”
– Jenny O’Grady
Originally published September 2007