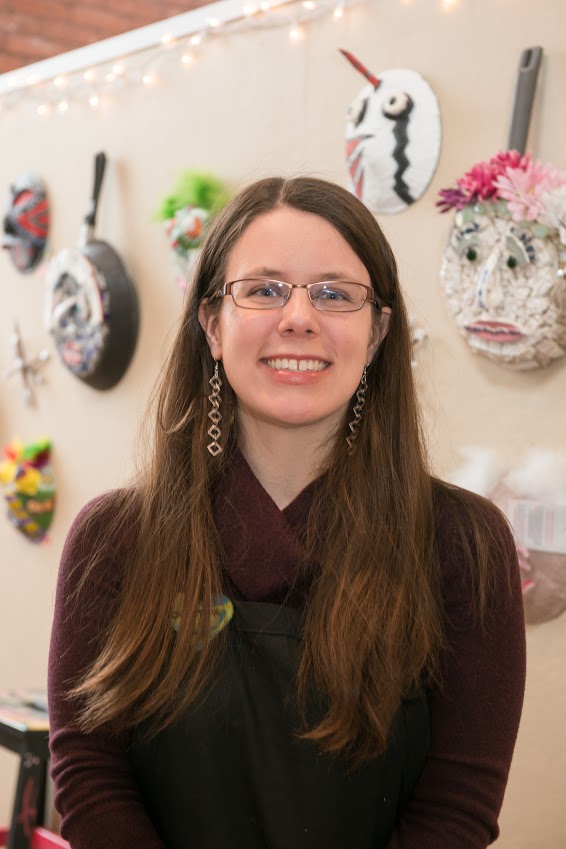 If you met Christina Ralls ‘07, visual arts, in her office at Art With a Heart and saw how effortlessly she interacted with the huge cast of charities, non-profits, and community members that liven up HeARTwares, Art With a Heart’s social enterprise and marketable art store, you probably wouldn’t expect that when she arrived at UMBC from eastern Maryland, she was a shy, quiet introvert.

And, if you saw how enthusiastic she was to make art with the countless Baltimoreans she comes into contact with, you probably wouldn’t expect that she started off as a computer science/visual arts double major, either. “I actually wanted to work on video games,” Ralls says, “I thought working behind a computer screen suited me better.”

But, despite her tendency toward introversion, Ralls is thoroughly dedicated to Art With A Heart’s mission to enhance the lives of people in need through visual art. She’s also enamored with the idea of community, so much so that her time at UMBC can be seen as one headlong dive into greater and greater connection.

Ralls first pushed herself to become more involved with campus life: she joined the Student Government Association, was elected president of the Visual Arts Council, helped develop Art Week, was an Imaging Research Center fellow, and she even installed an interactive sculpture at the Baltimore Museum of Art with undergraduate research funding. And, as her connection to the UMBC community grew, so did her appreciation for the interdisciplinary culture in which she found herself increasingly ensconced. “I’m incredibly indebted to the entire Visual Arts department [and the IRC],” Ralls says. “They were all great arts advocates and very community-minded in their work.” 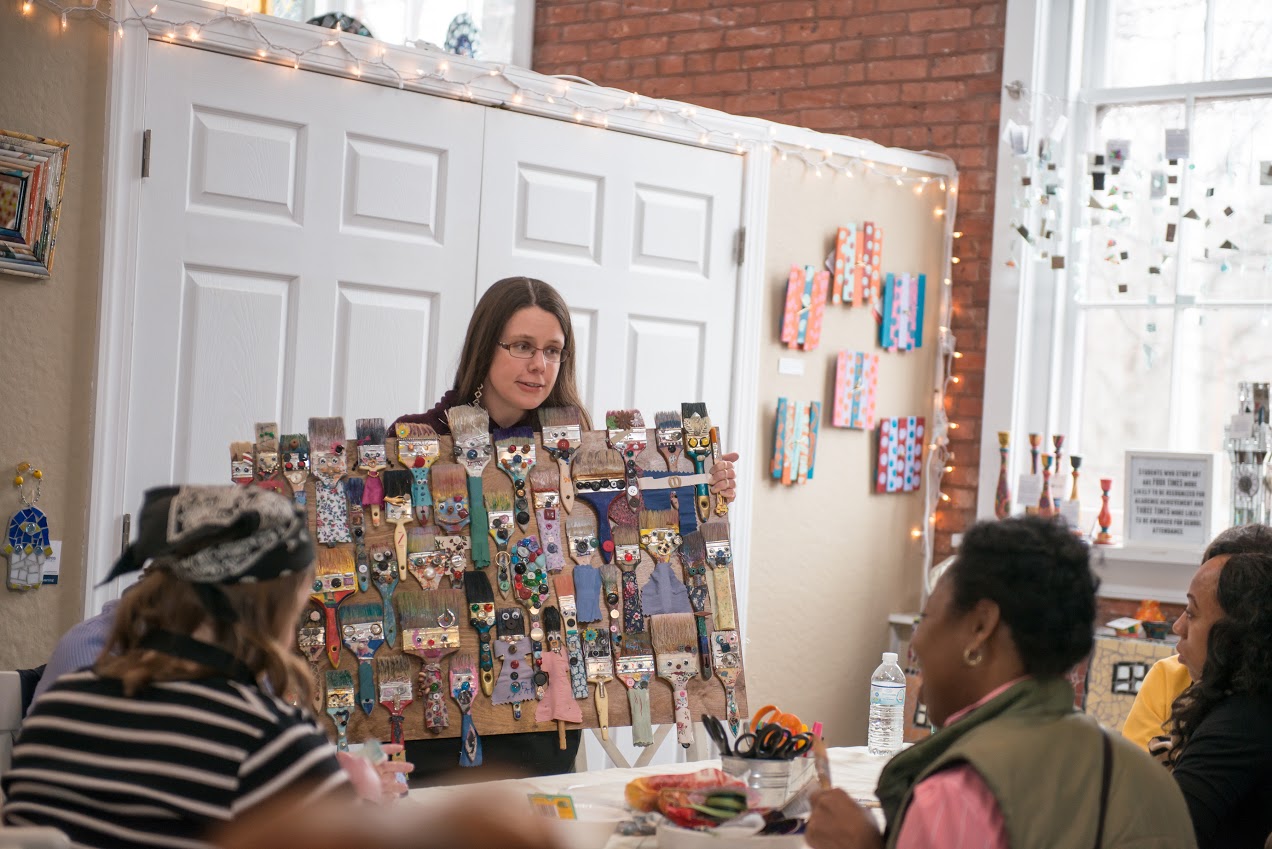 Such togetherness brought Ralls to her two most pivotal experiences at UMBC: Dr. Anna Rubin’s “Art in Community: Senior Citizens and Dance” class and the annual Baltimore Kinetic Sculpture Race. It was in Dr. Rubin’s class that Ralls first discovered the concept of “community arts,” or art that is grounded in a sense of social justice and seeks to develop, through the artistic process, dialogues between members of a given community in the hopes of strengthening it. Ralls describes the class as “magical: you had physics students and history majors and artists all working together to create a dance piece. We even had members of the retirement community and a Japanese dance troupe in the ensemble! It was a life-changing experience; we were able to tell our stories together in an intergenerational, intercultural, and interdisciplinary performance.”

Brimming with these new artistic possibilities, Ralls and a few of her engineering and science friends turned to Kinetic Sculpture Race. “None of us had ever participated in anything like it before,” she recalls, “but after the first time, we couldn’t stop; we were totally addicted.”

For Ralls, the race was a way to further develop the ideas and potential she encountered in Dr. Rubin’s class, but it had an unintended consequence as well: “Oh,” she beams, “I fell in love with Baltimore. Being in the race and the community, I felt like I was a part of the city, but I also encountered a Baltimore that was new to me, and it piqued my interests.” 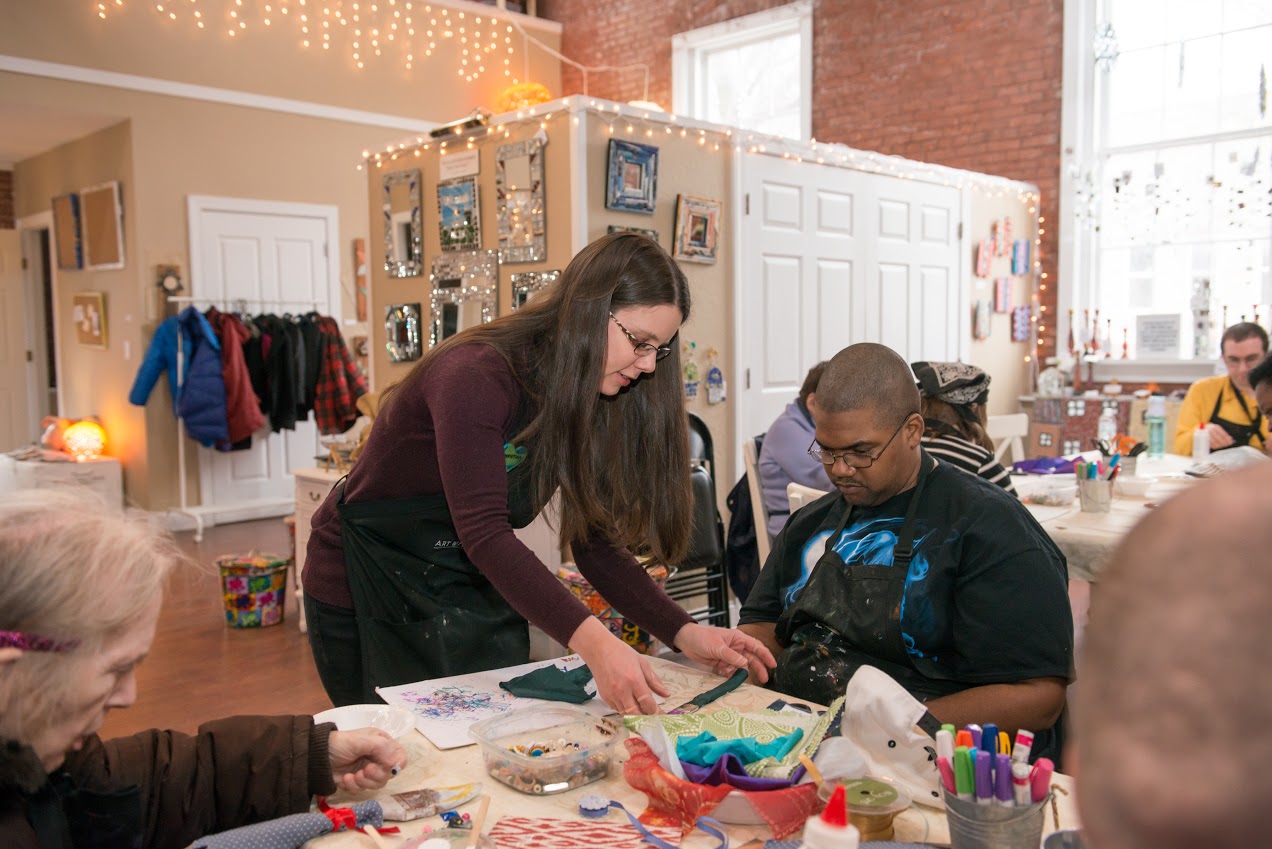 So, she decided to stick around after graduating from UMBC, picking up an M.A. in Community Arts from MICA and falling more in love with the city in the process. “I feel that Baltimore embraces the arts as a vehicle for change,” she says resolutely, “there are so many ways to connect and help out; that’s where my love really manifested: I try to do what I can to make the city stronger.”

And she has: since receiving her masters, Ralls has participated in a number of community art projects, including the award-winning Baltimore ’68: Riots and Rebirth initiative, for which she facilitated the creation of a mosaic to commemorate the work of Dr. Martin Luther King Jr. and the unrest that erupted in Baltimore after his assassination.

For months, Ralls worked with a dedicated group of ten volunteers who experienced the unrest first hand (including her parents) to design and piece the mosaic together, a process she documented in this video. “Community art is really about giving people a voice,” Ralls said, “which is why we called the project One Mosaic, Many Voices: each participant had their own piece of the story, but each piece informed and strengthened the others.”

Since then, Ralls has taken her facilitating skills and put them to use as Art With a Heart’s Director of Workforce Development and Social Enterprise, a position she’s held for the past two years. “Basically,” she said while overseeing an intern’s work on his own mosaic project, “I coordinate our workforce training programs: we cultivate a safe space for people of all ages and backgrounds to express themselves creatively, as well as provide them the tools to develop soft job and other life skills. Our goal is sustainability; we want everyone we work with to develop a sense of hard work, quality, and personal investment towards whatever they do, which will hopefully keep leading them to bigger and better things.”

“And on that note,” Ralls added, “to all the current UMBC students: there are so many opportunities out there; if you see one, take it! Explore, experiment, find yourself, but above all, don’t be afraid to go outside your comfort zone. You might just find your passion in the most unexpected of places.”