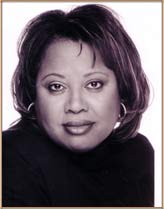 This time of the year, Linnyette Richardson-Hall’s phone never stops ringing.
The brides – 22 of them this season, to be exact – call her about the important details of their weddings at all hours of the day. Should they go with organza or satin gowns? Fresh tulips or gardenias? Garden tents or opulent ballrooms? At every turn, Linnyette’s ready.
“People think being a wedding planner is so glamorous, but it’s not,” said the Baltimore native who, in addition to running a high-profile business – Premiere Event Management – also serves as a consulting “wedding diva” on the Style Network’s “Whose Wedding is it Anyway?”
“It’s really hard work,” she said. “Television has glamorized this business, but there’s a lot of pressure. (Weddings are) a financial investment and an emotional investment.”
So, how did a sociology major with interests in religion, politics and economics wind up becoming an expert on all things matrimony? Richardson-Hall certainly didn’t see it coming following her 1984 graduation from UMBC.
“Did I have any idea I was going to be a wedding planner?” she asked. “Of course not. I had a degree, but I wasn’t quite sure what I wanted to do.”
Following graduation, Richardson-Hall “fell into” the financial industry, working her way up the ladders of a variety of local institutions. She then moved into telecommunications, serving as a regional administrative manager for what would later be known as MCI World.com. While her career fulfilled Richardson-Hall’s need to work with people, it still left her craving more.
It wasn’t until Richardson-Hall planned her very own wedding for 300 guests in 1993 that she truly found her calling. She thrilled in the planning, the details – and the compliments she received from her guests.
A year later, she launched Premiere Event Management and www.theWeddingDiva.com, “and it’s been going gangbusters ever since,” she said, laughing.
With an ever-growing list of clients, television and publishing commitments and a side business training wedding planner wannabes, Richardson-Hall appears to have found a niche, catering to a clientele interested in creating something new and different – often while preserving the traditions of a variety of cultures.
“I don’t do cookie-cutter weddings,” said Richardson-Hall, whose Web site touts several of her weddings, including a Carribbean-themed “Moonlight on the Beach,” a formal “Hollywood Glamour” event, and a “Fall Fantasy” wedding, complete with wreaths and décor meant to bring the colors of autumn indoors.
In handling such events, Richardson-Hall seems to have found the secret to wedding planner success: knowing that the bride is always right.
“I get very close to my clients. There are so many details, but they trust me implicitly,” she said. “They’re all a creative challenge.”
– Jenny O’Grady
Originally posted in July 2005