On UMBC’s second annual Giving Day last week, campus and social media buzzed with creative call-outs and challenges for 1,000 donors to participate in the 24-hour window. Mama’s Boys, True Grit, and other student-led entertainment drew a crowd to Main Street where the festivities celebrated the ongoing gifts rolling in, while different departments and athletic teams took to Twitter to playfully compete with each other, using car karaoke and other incentives to spur on supporters.

In typical UMBC fashion, students, staff, and alumni rallied to go well beyond the goal and by midnight, 1,554 donors had raised $106,906 to support an array of campus programs and scholarships.

So what did this Black and Gold Rush of philanthropy look like on campus and beyond?

The day underscored UMBC’s culture of gratitude and generosity. By 9 a.m. the University reached 25% of the donor goal, and while most of the giving was online, the IRL experience was just gearing up. Main Street in The Commons came to life as employees and student volunteers set up for a massive thank you card writing effort awash in black and gold. Students also participated in philanthropy trivia, earning prizes and snacks.

Chalese Cathran ’20, psychology and education, took part in the events and paused to consider the impact of donations as she wrote a thank you note to donors. “I learned that 54% of new freshmen receive scholarships. I’m one of those students. I didn’t realize how many of us there were.”

The Alumni Endowed Scholarship Fund and the Scholars Programs were two of the top three recipients of donations, underscoring UMBC’s emphasis on providing resources for students to break through financial barriers. The Women’s Center was another program rewarded by their ongoing social media outreach, earning support from 78 individual donors.

Rising to the Challenge

“At one point, it felt like there was a gift coming it at every second,” said Joanne Meredith, director of annual giving, who credits the success of the day to involvement at every level. New to 2019 was the Quest, a game created to engage current students in the day’s activities. “This is going to be our next generation,” said Meredith. “Some of them now may be receiving scholarships or financial aid and this helps them understand why we do this Giving Day.”

The campus-wide game gave students clues to locations that featured a life-sized cut-out of mascot True Grit. After finding the correct spot and posing with philanthropy-related factoids, students from 26 different teams walked away with a better idea of the effect giving has on their student experiences.

One group of four was organized by Marygrace Reyes ’20, environmental science, who roped her friends into participating. “This gets me out there, having fun and being involved. And a free t-shirt,” said Nick Le ’21, information systems, joking that Reyes also rescued him from doing homework.

Navigating the Quest clues landed them at Lecture Hall 1, the entrance to The Commons, the Resource Learning Center, and the Residential Life office.

“This sounds really cliché, but I might actually go donate something,” said Lauren Chua ’21, mathematics and statistics, reflecting on what she learned during the Quest. “It doesn’t take that much time or money to help.”

In the 25 minutes it took Reyes and her friends to accomplish their task, the donor tally grew from 449 to 539, meaning the marathon surpassed half its goal right as the time hit the halfway mark at noon.

By 2:30 p.m., 75% of the goal had been reached but the day was far from over. The UMBC Swimming and Diving Team led the charge on social media and their supporters made a huge splash, earning the team the highest spot of the list of University ambassadors – as well as donors and dollars raised – for Giving Day.

While the whole UMBC community benefits from the philanthropic endeavor, an ongoing leaderboard tracked the top offices designated by donors to receive funds. Athletics encouraged donations with lively social media feeds that included car karaoke and other entertaining livestreams.

Other standout feeds worth following included the UMBC Bookstore, who highlighted staff and students in an impressive roundup of UMBC impact stories over the course of the day. The College of Engineering and Information Technology also stepped up to the plate, with Dean Keith J Bowman leading the charge, shamelessly using his pup Odo to elevate his college to fourth place in donors and donations. 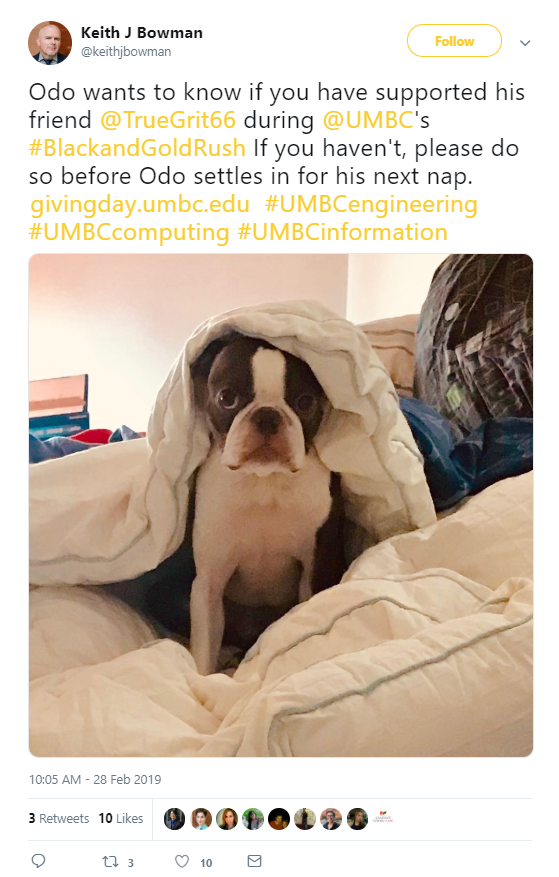 As the clocked ticked down to midnight, support continued to pour in beyond the original goal. “UMBC is such a great community so this doesn’t surprise me, but when you raise the bar, they always jump to reach it,” said Meredith. “There is this grit here that leads to greatness.”

Unless from social media, all photos courtesy of Marlayna Demond ’11 for UMBC Magazine.