From its very first days, Earnestine Baker, Executive Director Emerita, has been an integral part of the Meyerhoff Scholars Program. UMBC Magazine sat down with Baker to talk about some of the ways she — along with other staff and students — laid the foundation for the program’s successes over the last thirty years.

UMBC Magazine: What are some of your first memories of how the Meyerhoff Scholars Program came to be?

So in that capacity, I worked to establish the scholarship program for incoming freshmen. One afternoon in the summer of 1988, I received a life-changing call from the Assistant to the Vice Provost, Dr. Freeman Hrabowski, inviting me to come to a meeting to discuss scholarships. I was thinking that we would talk about my work and plans for UMBC’s scholarship program, but instead he laid out his plan for recruiting, to UMBC, African American men who would go on and achieve Ph.D.s in science. He met with Mr. and Mrs. [Robert] Meyerhoff, and he wanted to develop this program. I hesitated a little but finally said “Okay,” and he said, “I want to create the environment that we had when we were undergraduates [at Hampton Institute now Hampton University.]” And when he said that, I knew immediately what he was talking about. … During the meeting he asked if I would look into developing an application for the Meyerhoff Scholars Program. I went back to my office, developed a design and that’s how I began working with the Meyerhoff Scholars Program. By the way, the first application received for the Meyerhoff Scholars Program was from Chester Hedgepeth now an M.D./Ph.D. from the University of Pennsylvania. 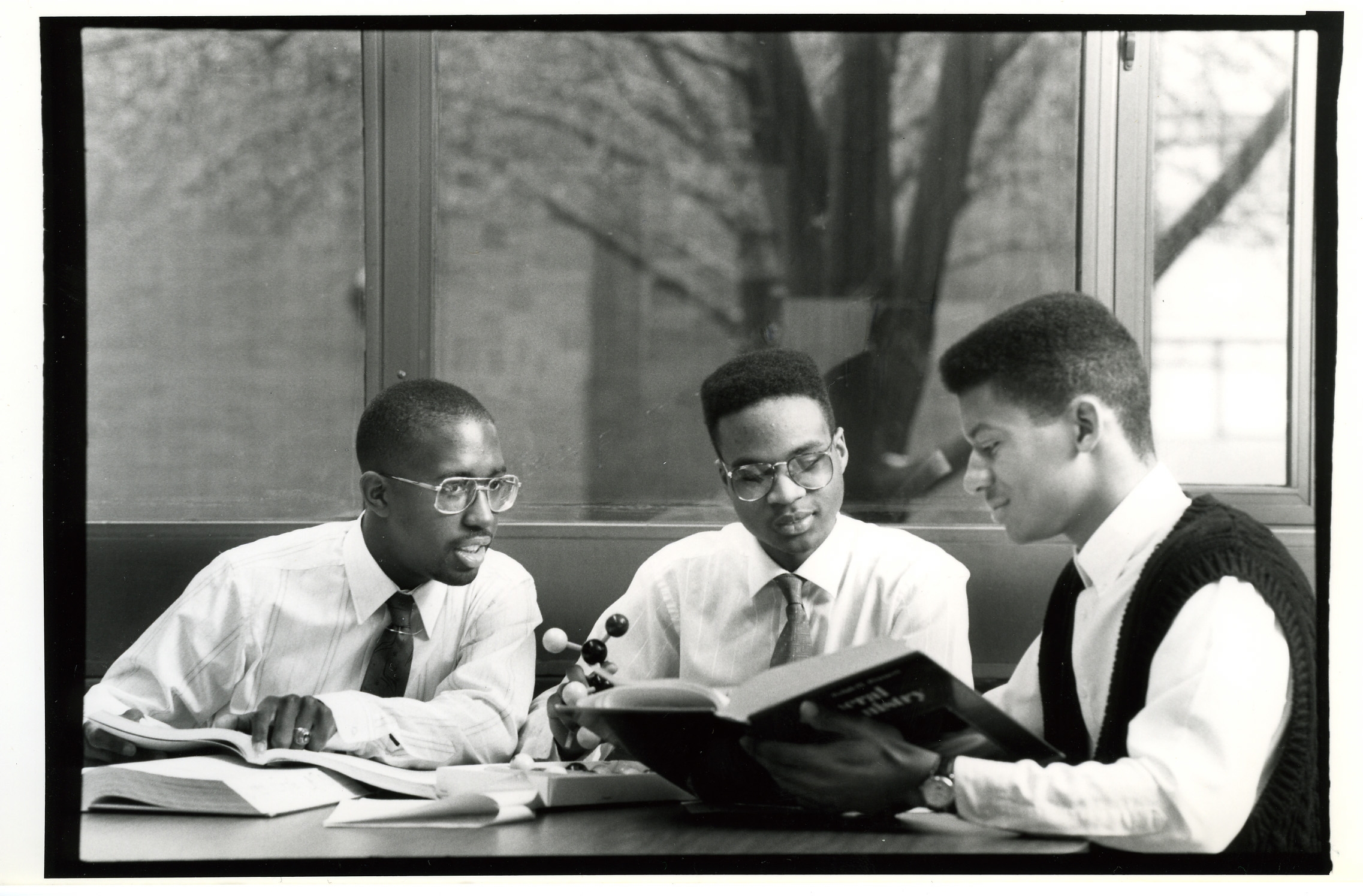 UMBC Magazine: How did you initially spread the word about it?

Earnestine Baker:  So that’s an excellent question, because what happened after that meeting I thought was very smart of Doc. He sent letters to all the state superintendents of schools, principals, the heads of private and parochial schools, letters to guidance counselors throughout the state, community leaders, inviting them all to come to UMBC for a meeting. During this meeting, he again laid out his plan for the Program; first buy-in approach I thought.

Additionally, we asked students who were the people who made an impact in their lives educationally. And they said, “My teacher in biology,” or “My guidance counselor,” or, “My minister,” “My pastor of my church,” or “Someone down the street.” We collected names and addresses of individuals and invited them also to this meeting, and … asked them to nominate students for the scholarship. From this came the Meyerhoff Nomination Process.

UMBC Magazine: How did folks react to the program at the very beginning?

Earnestine Baker: That’s what was great about this meeting with the superintendents, principal and others …yes we announced the scholarship, but we also wanted support, buy-in, plus community ownership for the Program we were about to launch.

UMBC Magazine:  So in a way, you were opening the door to the people who were most likely to make it successful, because someone coming to the meeting was already going to believe in what you’re talking about. That seems like just such a smart move.

Earnestine Baker:   Right, it was a very wise decision. We let our leaders in education know that UMBC will provide another opportunity for them to support students whose goal is to increase the number of scientists who will teach and become researchers.

UMBC Magazine: What was it like bringing students into research opportunities for the first time, when you were still figuring pieces of the experience out?

Earnestine Baker:   The students were very excited. We knew for them to have a competitive application for graduate and professional schools, they needed strong research experiences, be it in industry or in higher education. Initially, a larger number of students were completing research in industry and not in higher education, at the NIH, National Science Foundation, NSA, and NASA; we had more connections in industry at that time.

At UMBC, the first faculty member to take one of our students in his lab was Dr. Frank Hanson in the Biology Department. I said to Frank, “I need to find a lab placement for one of our students,” and he said, “Well, let’s look at it and see what we can do.”

It took many, many meetings with high schools, universities, federal and state agencies and individuals to get our message “out.” Many of these meetings included Charles “Tot” Woolston – you don’t hear much about his efforts, but he gave tremendously while promoting the Meyerhoff mission and goals. Dr. Phyllis Robinson, Biology Department was extremely helpful in advising the program for internships and graduate school placements. A major breakthrough for research opportunities came when Dr. Hrabowski connected with Leadership Alliance, whose executive office is at Brown University.

Dr. James “Jim” Wyche was the director of the Leadership Alliance as well as a faculty member at Brown. This partnership, provided opportunities for our students to participate in research at the top leading institutions across the nation. There are about 38 schools in the Alliance now. I invited one of the Leadership Alliance faculty members from Harvard University to visit UMBC, meet faculty and the Meyerhoff Scholars. From this meeting – the next two summers, she (the late Dr. Jocelyn Spragg) selected three Meyerhoff Scholars for summer research at Harvard. The Meyerhoffs Scholars were Crystal Watkins M3, Damon Tweedy M4, and Andrew Atiemo M4. Their work was exceptional and created an interest in Meyerhoff Scholars at other top tier universities. This was a very exciting time, and my confirmation that “yes, we can do this.” Jocelyn invited me to visit Harvard while Damon and Andrew were there. She remained a good friend and strong supporter of UMBC and the Meyerhoff Program.

UMBC Magazine:   I would love to talk about Summer Bridge, because that is what comes up so often with everyone as a really pivotal moment of the Meyerhoff experience.

Earnestine Baker:  I feel Summer Bridge is the key component. It is the beginning stages of becoming a Meyerhoff Scholar and truly understanding the goals of the Program and what it means to work together as a family; the true feeling of the Meyerhoff family.  I often say to students “you don’t have to love each other, you don’t have to like each other, but you have to help each other.”

It’s not only about working together as students, but also learning how to work with faculty, staff and administrators; teaching the UMBC way, the Meyerhoff way. Academically, we talked about high expectations and goals. We had regular meetings and talked about how the Program expected students to perform academically, personally, socially … in all aspects of their undergraduate career.

What is critically important, and what we have tried to communicate over the years, is that you cannot be successful in STEM trying to do it alone, nor should you try. Interdependence is taught during Summer Bridge, and it’s very important. Some students’ approach is similar to high school, “I have to do this by myself. I cannot – I don’t – I shouldn’t ask questions, because if I ask questions it shows that I’m not smart, I’m not capable, and I’m not intelligent.” Hence some don’t want to ask questions or reach out for help. Some have the mindset, “It’s me. It’s mine. And that’s the way it’s going to be.”   I know it’s a part of their growing-up experience. For some, it’s the first time — hearing when you gain knowledge and achieve you should, and we expect you to, share what you have gained with others. When one wins we all win. When one fails we all fail. In Meyerhoff failure is not an option.  Can you imagine the reaction in a calculus class when the lowest grade on a test – let’s say 69 – becomes the grade for everyone in the class? Not happy campers.  Over the years I have enjoyed and appreciated the lesson learned in this class; seeing the class come together and work to achieve an “A” was just what I hoped would happen. It’s a powerful lesson and it has been passed forward.  During Summer Bridge scholars are expected to move about campus together – a part of the bonding process.  I remember once a group of scholars decided to leave their cohort early for lunch.  Upon my arrival to the dining hall one of the dining hall staff members reported to me that some Meyerhoffs had arrived early and she knew that they were not supposed to do that.  This to me was a wonderful example of institutional buy-in.  This staff member knew and supported our mission.

It begins with Summer Bridge, and the lessons learned hopefully will continue. I’m told it continues at the graduate level and in the work place. Summer Bridge is not easy. LaMont (Toliver) and I used to plan, plot, and scheme to make each Meyerhoff co-hort the best they could be. No gaps in the line while walking to class together, 6 a.m. wake-up calls, never late to anything, sit in the front of class … Scholars were not always happy with us, I know, but I hope they realize the reasons and can see and appreciate the benefits. For what we have accomplished over thirty years – “it is worth it.” 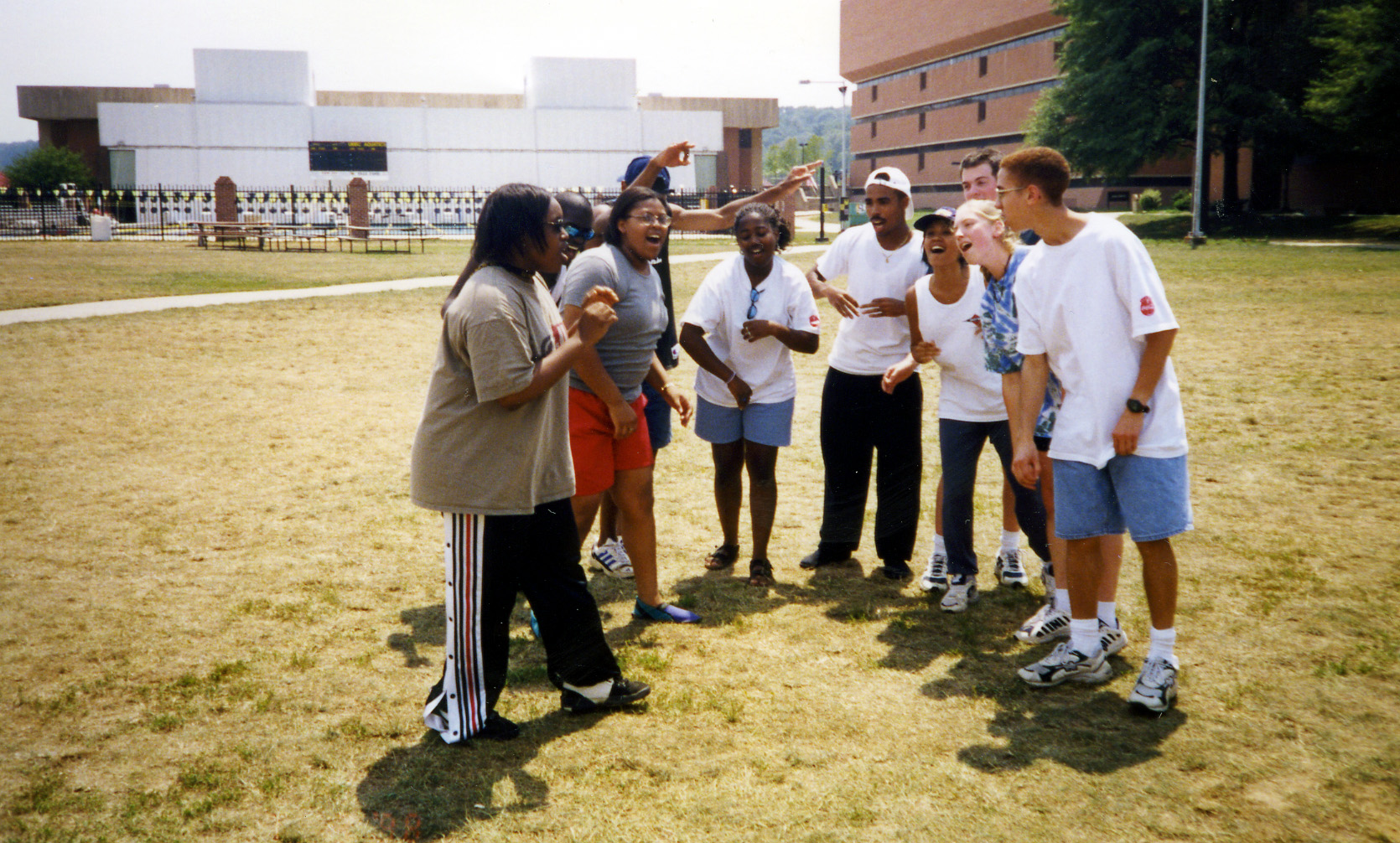 UMBC Magazine: What’s it like talking with students about Summer Bridge now, especially those who didn’t initially understand what you were trying to do?

Earnestine Baker:  It was a challenge seeing Meyerhoff Scholars go through Summer Bridge and initially not understanding its purpose, not getting it. Sometimes I saw hurt on their faces, or anger, and I said to them, ‘ Just listen. Just listen and you’ll come to understand what it is that we are trying to do.’ … And now I hear – ‘Okay, I’m out. I’ve graduated now, and I get Summer Bridge. I understand’…and they find themselves repeating some of the same principals not only to their students and colleagues, but to their kids…. I feel this part of my life has been so worthwhile. At the end of the day, I exhale and reflect, and I say, ‘Thank you, God.’”  Many scholars have expressed their gratitude for my support over the years and I am grateful.  But the only thank you I desire is to see them give back to others.

Learn more about the Meyerhoff Scholars Program at meyerhoff.umbc.edu.