Imagine having the chance to put down your books and computers and hit the open road. For a growing number of UMBC students, summer study abroad offers the opportunity to explore new cultures, meet interesting people, and see the beauties of the world first-hand.

This summer, UMBC’s Office of Study Abroad sent groups of eager students to four amazing locations — Italy, Colombia, Spain, and the Netherlands — and lucky for us, they captured photos and special moments all along the way! 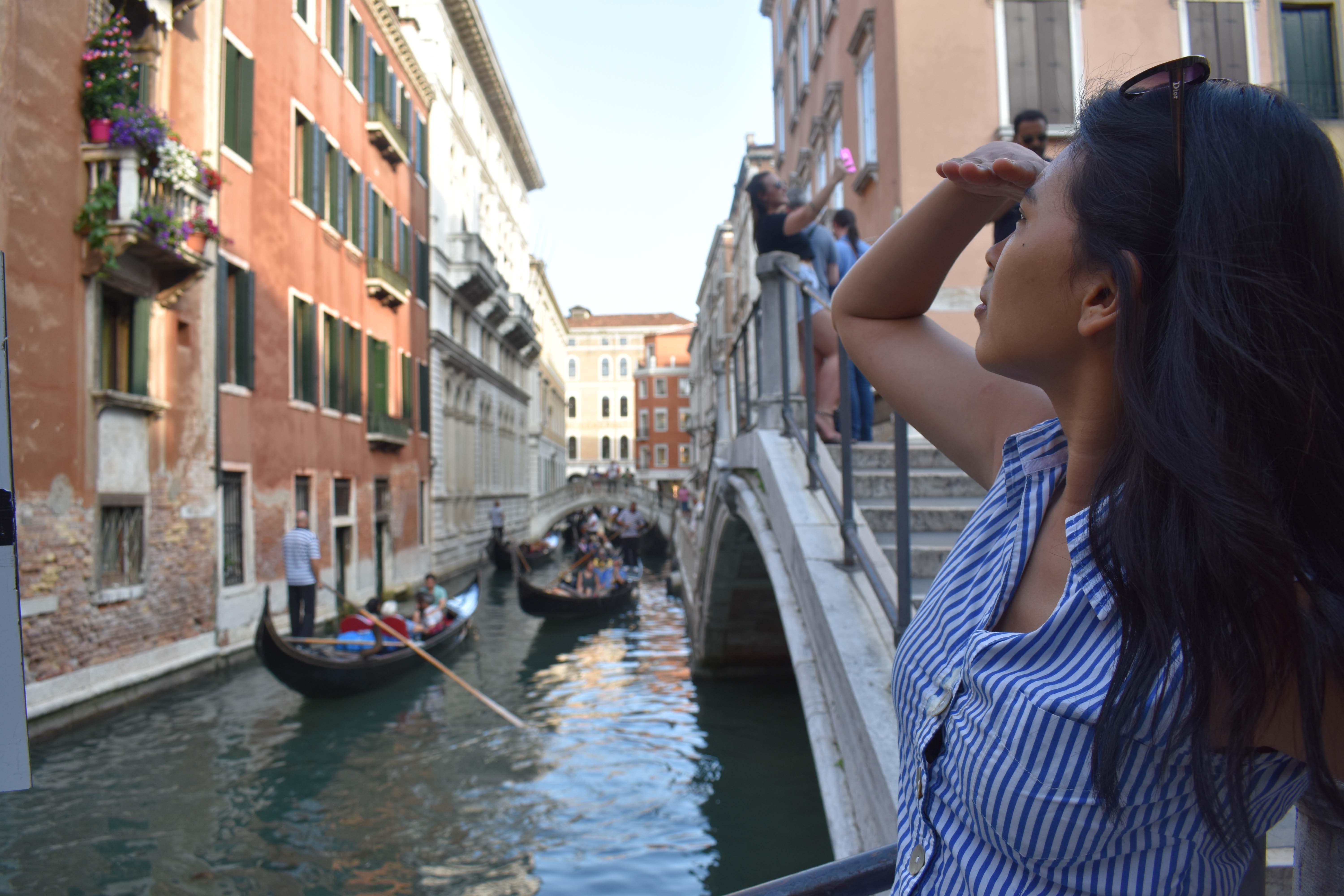 “My favorite things about my host location so far is definitely the number of designated stores for wine, pizza, and gelato that the place has to offer… Siena is famous for its magnificent art and architecture that are reminders of the renaissance period. So naturally, we had a couple guided tours of cathedrals around the town. One of the best schools in the country, University of Siena, is also located here and luckily our program allows us access the library and cafeteria amongst other Italian students.”

“The farewell dinner last night officially marked the last agenda of our program with the group leaving next day alongside the professor. My bus however leaves in the evening towards Rome, so I’m exploring Siena for one last time in the morning. I have formed a special bond towards this place and have scribbled ample memories into my journal that will last a long time.”

We bid Florence goodbye and headed back to Sienna. The bus ride was a peaceful one since everyone was exhausted and was busy catching up on some 💤. I myself was staring out the window spaced out in the backdrop of gorgeous Tuscany hills, listening to my music as I fell in and out of sleep.. So far, Europe to me feels like a beautiful dream, a dream that I wouldn’t want to wake up from~ On that note, thank you so much guys for your interest in my feeds and virtually exploring Italy with me via InstaStory! If you guys wish to continue following my travel journey, check out my blogs for the program on UMBC’s study abroad page. My best regards, Ciao! This is Tenzin signing off! #UMBCabroad #UMBCInternational 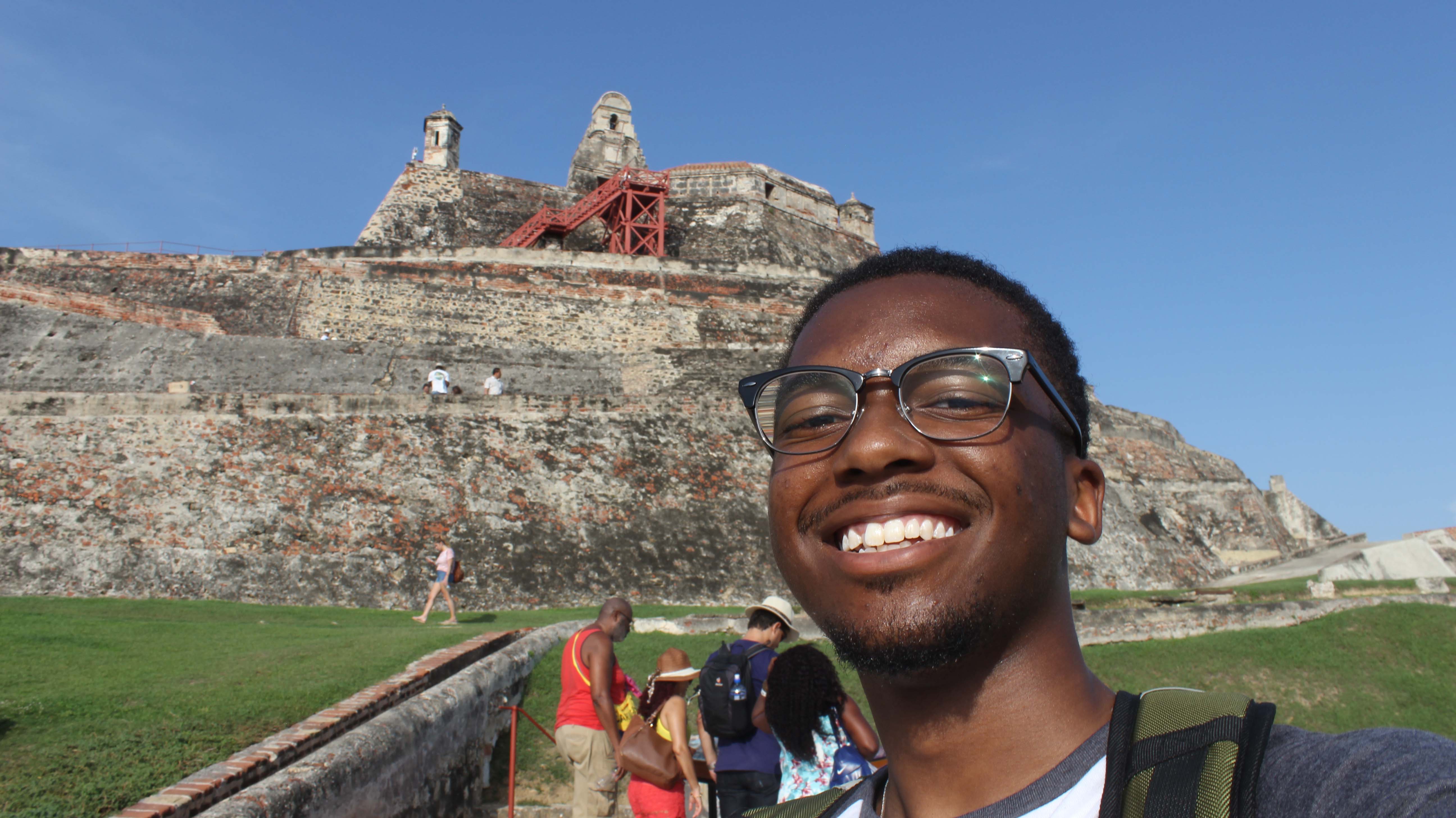 “The fact that that I am thousands of miles away from home is just a surreal reality. I chose to travel to Colombia for Spanish because I don’t want a language barrier to stop me from connecting with others. Spanish is the first language that I have really been exposed to and taught in school. I want to pursue a career through sociology studies, and being able to speak another language is very beneficial, especially because I know many Spanish speakers in Maryland, and I want to take my practices to different places, such as Latin America.  Colombia also has an emphasis on Caribbean culture, Afro-Latinos, and the belief that Colombians speak the best Spanish. I could not have picked a better place.”

“The first day in Santa Marta, which is also the day that I did the Instagram Takeover, we took a tour and visited La Quinta de San Pedro Alejandrino, which was home to Simón Bolívar, the first president of Gran Colombia. He was originally born in Venezuela, but made a great impact on Colombia. We also visited the Museum of Gold, which told history of the Tairona, a native people that were close to Santa Marta and who were known for the advanced techniques in ceramics and shaping gold. Then we went to the area on the outer mountains of Taganga, where we could see the sun in the distance over the open sea. It was very popular spot because so many people parked to take pictures there. Our group took a bunch of pictures and we even got a nice group selfie.”

And with this, I say adiós. Thank you all for keeping up with me for the day. We are still in Santa Marta until Monday, and tomorrow we visit Aracataca to visit the hometown of Gabriel García Márquez, the legendary Nobel Prize Winner. But today was amazing, and it ended beautifully with this view from Taganga. I am absolutely enjoying my time here in Colombia. Great memories with great people in great places. You can read more about my experience on the Study Abroad page of UMBC. Once again, thank you. Peace and Love #UMBCAbroad @tylerchristianevans 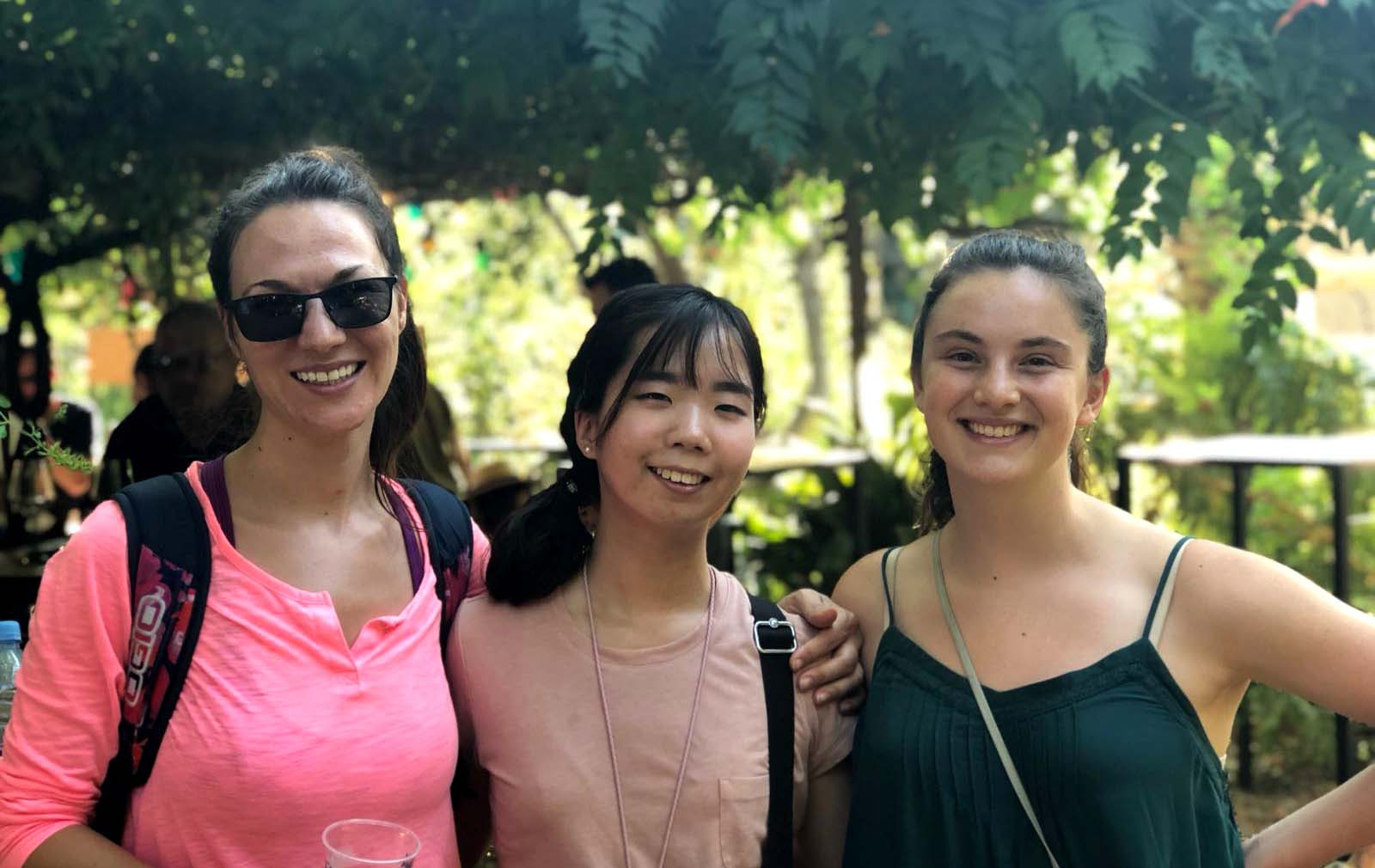 “Spanish classes had class excursions to different areas in Gothic Quarter. While the Beginner and Pre-Intermediate courses visited a local market, the Intermediate Class visited La Casa de La Ciutat, the building for the Barcelona City Council that is opposite of El Palacio de la Generalitat and located in the literal center of the city. The exterior architecture was a work of art, with gargoyles and different facades. Likewise, the inside was even more beautiful. There were stained classes, statues, lights, and murals that decorated the inside. Although the entire tour was in Spanish, I enjoyed learning what I could about the historical and political significance of the building. Everything had purpose and meaning that ultimately culminated to what represents the foundation of what Barcelona is.”

“Looking back, if there’s any advice from Barcelona that I would share with prospective study abroad students, then it would be the word, ‘vale,’ the Spanish word for ‘okay.’ This single phrase alone can lead to a waterfall of experiences. To brave past the barrier of doubt and to say ‘vale’ to things that may seem unfamiliar, different, or even intimidating will indubitably pave the way to unforgettable memories. My only regret in Barcelona is that I wish I lived more, experienced more. Therefore, I hope that anyone who has read my entries is kindled with a flame of curiosity and wanderlust. Moreso, I hope that they will act upon this desire to experience, and that they will turn excitedly to their next adventure, saying: Vale!”

✔ Class excursion to the Royal Academy of Medicine of Catalunya From the 18th century, the building houses several classrooms where dissections of human corpses were performed (Gross, but for medical advancement!). The largest room, Sala Gimbernat, was a medical amphitheater where Catalan medical doctors and students viewed dissections to learn human anatomy. 👨‍⚕️ Interestingly, a lot of the interior design and furniture didn’t exist in the 18th century; all of the rooms were of stone. Also, there’s a church inside of the building because seeing the insides of bodies seemed…unholy. Surgical tools were also washed with holy water! #UMBCAbroad #UMBCInternational 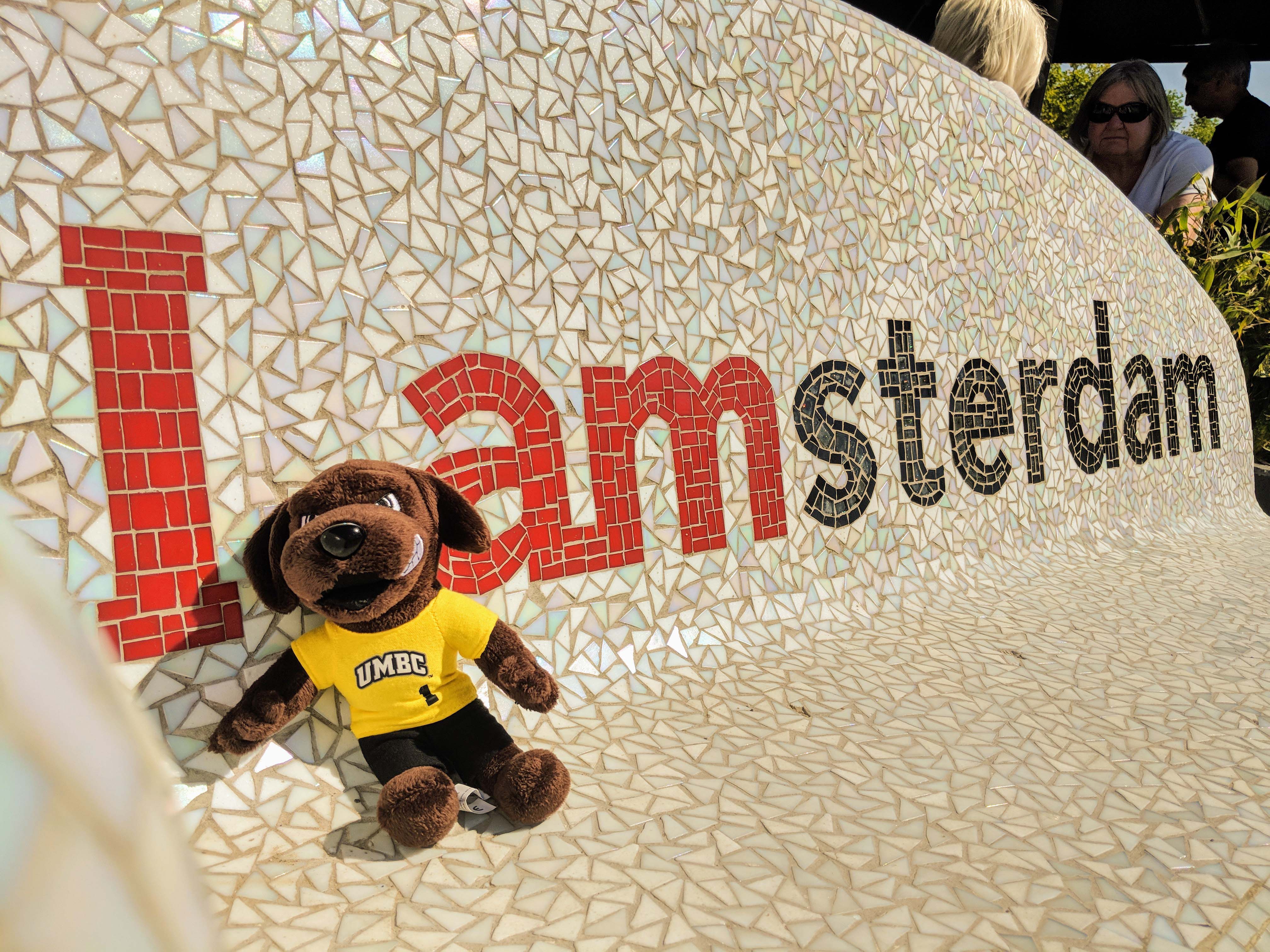 “Today we were in Utrecht, where we visited the Centraal Museum and took a walking tour of the city. The Centraal Museum was particularly crowded because of a special exhibit showcasing some of the collection of Dutch clothing designer Jan Taminiau. Utrecht’s pride is their Domtoren, a 14th century bell tower that is the tallest in the Netherlands. Opposite the Domtoren is the Cathedral of St. Martin. Both of these iconic structures lie within the Domplein Square, which is also the biggest Medieval city square in the Netherlands. Another unique feature of Utrecht is their canal system. They have comparably fewer canals than most other cities in the Netherlands (just three), but wealthy families who owned the canal houses many years ago built basement tunnels next to the canals to more easily move goods from canal boats into their homes. Today, many of those basement tunnels have been transformed into cafes and restaurants that allow you to relax canalside.”

“Looking back at my now complete Amsterdam adventure, what comes to mind were those words we used to describe our first impressions of the city, words like ‘energy,’ ‘chill,’ ‘cultured,’ ‘bold,’ and ‘dope.’ Amsterdam lived up to it all. The city was welcoming and easy to navigate, and we got to experience a multilingual city in action. For us, that meant readily accepting the advantage of our English knowledge, but also witnessing the friction and destabilization that encroaching English can create for other native languages.”

As in #Amsterdam, the architecture here in #Utrecht is breath-taking. We’re on the walking tour now, learning about the history of Utrecht. There are an unusually few amount of canals here (only three), but the Dom Tower, the pride of Utrecht, is the highest in the Netherlands and is centered within Netherlands’ largest Medieval city center. The University of Utrecht, the largest university in the Netherlands, is also amazing. Could you imagine taking a class surrounded by such history? #umbcabroad #umbcinternational 🇳🇱 @squirrellymary

Header image: a group shot in Barcelona. All photos were taken by the 2018 Student Ambassador bloggers. Learn more about how you can explore the world with UMBC Study Abroad!