Ana María Schwartz Caballero, associate professor of modern languages, linguistics, and intercultural communication, is retiring from UMBC after more than 25 years of service. “This was a very difficult decision but it was the right time for me to retire,” says Schwartz Caballero. “UMBC has been my home for many years.”

Schwartz Caballero joined UMBC in 1984 as a lecturer for Spanish language classes in the modern languages and linguistics department. She became an assistant professor in 1996, received tenure as associate professor in 2002, and chaired the department from 2006 – 2012. Schwartz Caballero was one of the first faculty members to teach Spanish to heritage Spanish speakers.

The many programs, initiatives, associations, and committees she has led and participated in have helped establish a network of support and guidance for the success of UMBC’s Hispanic/Latinx community. And her legacy will continue to have an impact as faculty and students she has mentored carry on her work.

In a recent farewell event honoring Schwartz Caballero, President Freeman Hrabowski thanked her for being the voice for so many in the Latinx/Hispanic community on campus, in Baltimore City, and the State of Maryland. “Ana María has changed the culture of UMBC,” shares Hrabowski. “She has brought such rich diversity, and she has broadened our thinking about the world.”

Schwartz Caballero began her career at UMBC as a graduate assistant in the education department while completing her Ph.D. in second language education at the University of Maryland College Park. Soon after graduation, she became a Spanish and second language pedagogy instructor in what is now UMBC’s modern languages, linguistics, and intercultural communication (MLLI) department.

Schwartz Caballero has developed local, state, and national level professional development courses and instructional materials for Spanish language teachers. She has also provided research-based strategies for the integration and application of the National Standards for Foreign Language Learning.

In addition to her research on teaching Spanish as a foreign language, Schwartz Caballero’s work has helped develop best practices to support the learning needs of heritage Spanish speakers learning Spanish and other subjects. As a Spanish language heritage speaker herself from Cuba, Schwartz Caballero has a personal understanding of the complex needs heritage speakers face in the classroom.

She knows Hispanic/Latinx students who come to the U.S. as refugees, like she did when she left Cuba as a teenager, and those who immigrate or are born in the U.S. must grapple with their own diverse social-cultural identities in a country that often homogenizes their languages, race, cultures, and experiences. Her work has helped prepare student teachers and in-service educators with the skills necessary to support the learning needs of heritage Spanish speakers in a variety of contexts.

Schwartz Caballero also teaches educators how to be advocates. “Being an advocate for students,” she says, “can be the difference between a student graduating or dropping out. It is as important as their academic success.” She notes that teachers need to learn about the challenges Latinx/Hispanic students face beyond the classroom. Schwartz Caballero advocates educators to be understanding of a number of Latinx/Hispanic students who are often balancing work, family responsibilities, and financial hardships that hamper their success and can delay graduation.

Schwartz Caballero has been the faculty advisor to UMBC’s undergraduate Latino/Hispanic Union since 1997 and a founding member of the Latinx/Hispanic Admissions Advisory Group which develops best practices in recruitment and admissions.

In addition to her work with undergraduate students, Schwartz Caballero also worked with many graduate and doctoral students, helping them navigate the field and prepare for the next steps of their careers. For many doctoral students, she was also a compassionate ear, a cheerleader, and like family in the most challenging of times—she helped them find solutions to move forward. Adriana Medina, M.A. ’99, intercultural communication, Ph.D. ’04, language, literacy, and culture, one of many doctoral students Schwartz Caballero has advised, credits Schwartz Caballero for her own success in the classroom. “Ana María has been such a fantastic role model as an educator,” shares Medina. “She is empathetic, compassionate, generous, and also tough at times while also encouraging you. Now, I have been able to be that for my students.”

Luis Carcamo, M.A. ’95, intercultural communication, remembers how Schwartz Caballero “showed me the ropes of how teaching is done.” Now, in his 25th year of teaching, Carcamo has taken what he learned at UMBC to the southernmost tip of Latin America. “My city is the last city in South America. Ana María’s teachings reached not only the rest of the U.S. but also the rest of our America,” shares Carcamo.

In 2007, UMBC’s Chapter of Black and Latino Alumni awarded Schwartz Caballero with the Legends of Excellence Award: 40 Years of Inspiring African American and Latino Students.

Schwartz Caballero has worked tirelessly alongside Hispanic/Latinx faculty and UMBC leadership to recruit and retain Latinx/Hispanic faculty and support UMBC’s diversity initiatives. She was co-chair, with Philip Rous, provost and senior vice president for academic affairs, of UMBC’s Executive Committee on the Recruitment and Retention of Underrepresented Minority Faculty, and has been the president of the Hispanic-Latino Faculty Association for 10 years.

As the lead organizer for the Hispanic Heritage Month speaker, part of the Dresher Center for the Humanities Forum, Schwartz Caballero has helped bring Latinx/Hispanic scholars to UMBC annually for more than a decade.

“Ana María has raised the issue of diversity and inclusion in relation to Hispanic/Latinx folks in meetings, public forums, and anywhere she could,” says Jessica Berman, director of the Dresher Center for the Humanities. “She worked tirelessly to bring issues facing Hispanic/Latinx people forward, especially through many years of arranging speakers for Hispanic Heritage Month.” Berman notes how Schwartz Caballero’s dedication to fundraise for and organize the speakers elevated the event and led to its inclusion as a permanent part of the fall Humanities Forum.

These efforts have drawn Hispanic/Latinx faculty to UMBC who are leading research across all of UMBC’s academic divisions, including economics, engineering, MLLI, psychology, and more.

Many of the Latinx/Hispanic faculty recall Schwartz Caballero as the first person they met when they came for an interview. She would often pick up faculty at the airport and guide them through their visit. Once they joined UMBC, Schwartz Caballero became a valuable resource, advocate, and supporter. María Célleri, assistant professor in gender, women’s, and sexuality studies, remembers her first week on campus in 2019 during Commencement week. “I didn’t know what was going on but Ana María knew who I was, she knew my name, and my department. She made me feel so welcome,” recalls Célleri. “I love her genuine commitment. We are her legacy.”

Faculty also acknowledge her strong voice on their behalf and her example as a leader in her department, across campus, and beyond. “As a woman, it was very inspiring to hear Ana María, the voice of a strong woman in academia,” shares Renée Lambert-Brétière, associate professor of linguistics and French. “I thank her and I aspire to be like her and be a strong voice.”

Building on a legacy

Faculty have also valued her honest feedback and direction through different phases of their career by encouraging them to pursue leadership positions in their field, on campus, and in the community. Within the last year alone, María Cristina Sanchez, professor of the practice in mechanical engineering, has become the inaugural director of the Engineering & Computing Education Program, and Felipe Filomeno, associate professor of political science and global studies, has become the inaugural associate director of the Center for Social Science Research. Tormos-Aponte has recently received over $400,000 from the William T. Grant Foundation to conduct research on the policy impact of the Black Lives Matter Movement on youth.

Sanchez has been collaborating with Schwartz Caballero in UMBC’s Hispanic/Latinx Faculty Association and in several committees preparing to further the work along with her colleagues. “A lot of us are in the place that we are because of Ana María,” shares Sanchez. “We will try to continue what she started.”

Service to the community

Schwartz Caballero has also worked closely with the Latinx/Hispanic community beyond campus. For 20 years she has been the UMBC representative in the Maryland State Department of Education for world languages. She is the commissioner of the Baltimore City Mayor’s Hispanic Commission. In 2016, her oral story was part of the Smithsonian’s Anacostia Community Museum “Gateways” bilingual exhibition about the Latinx experience in the U.S.

Her dedication to the Hispanic/Latinx community has received national recognition. In 2014, she was awarded the Hispanic Heritage Leadership Award from the National Football League and the Hispanic Heritage Foundation. The award included a $2,000 donation to UMBC’s Esperanza Fund, a scholarship for UMBC undergraduate and graduate students of Latinx or Hispanic ancestry and/or students committed to the advancement of minorities especially of Latinx or Hispanic descent.

“Ana María has been, and continues to be, the North Star as we develop and evolve our plans to recruit Hispanic and Latinx students to UMBC,” says Dale Bittinger, assistant vice provost of undergraduate admissions, orientation, and school partnerships, and chair of the Hispanic/Latinx Admissions Advisory Group. “She is an invaluable resource and advocate whose teaching extends beyond the classroom. Her work and commitment to students is another example of why UMBC is such a special place.”

*****
Header image courtesy of Schwartz Caballero, her with students at graduation in 2014. 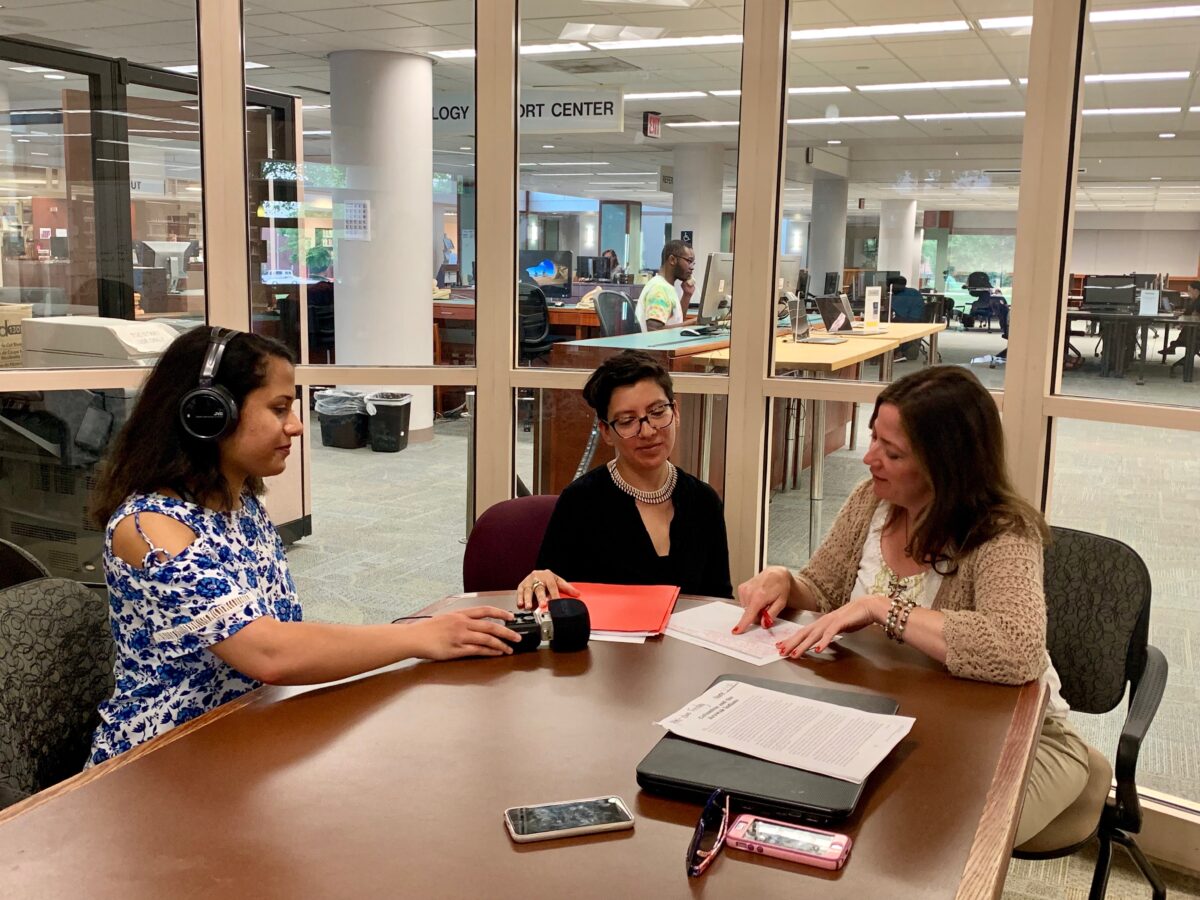