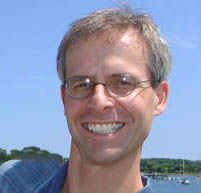 Question: How do you surprise a guy whose job it is to see ahead into the financial future?
Answer: Make him think he’s emcee for the night, then — quick! — pull a fast one and hand him the award.
“They got me!” admitted investment banker Don Blair ’89, of Tampa, Fla., who was named this year’s UMBC Economics Alumnus of the Year. “It was great to be back and to catch up with everybody.”
The economics department honors one graduate every year and celebrates the winner’s work at a banquet. Dr. Charles Peake, economics professor emeritus, said Blair exemplifies what the department is all about.
“Number one, he was a great student,” he said. “Number two, he’s been an active alum and he’s contributed to the university. That’s exactly the kind of person we look for.”
Blair started out at UMBC an engineering major, taking economics classes as electives just for fun. However, the more econ classes he took, the more the Catonsville native got hooked.
“I just got a lot more excited about those classes,” including “Money and Capital Markets” with Dr. Peake, he said. “The topics we covered were really relevant.”
After graduation, Blair worked as an accountant for two years in Baltimore. When he passed his CPA exam the same year, he did so with flying colors, earning the Elijah Watt Sells Gold Medal Award for the highest score in the nation.
Blair later earned his MBA from the Darden Graduate School of Business at the University of Virginia in 1994, which allowed him to move into investment banking. After working for Goldman, Sachs & Co. in New York for three years, he joined Raymond James & Associates in Tampa, where he currently serves as Managing Director of Investment Banking and head of IT services.
Somehow, he manages to balance his career with his family life. He and his wife, Laura, have three kids — Allie, Bo and Luke — which mean Blair spends an awful lot of time coaching T-ball.
“We’ve got a lot going on,” he said, laughing. “It’s challenging, but you’ve got to keep your priorities straight.”
— Jenny O’Grady
Originally posted June 2005