On a typical Saturday, in the wee hours of the morning — we’re talking two or three a.m. — Nikhil Yesupriya ’13, biological sciences, Steve Chu ’12, economics, and Ephrem Abebe ’13, information systems, are in the kitchen of Chu’s father’s restaurant in Pikesville, chopping, mixing, steaming. By 7:30, they’ve set up shop at the Fells Point Farmers Market, serving up their take on Asian fusion cuisine at the Ekiben food stand.

Ekiben got its start slinging steamed buns and rice bowls at the farmers’ market, and now, roughly a year and a half later, they’re opening a brick-and-mortar location at 1622 Eastern Avenue in Fells. The name refers to the elegant boxed lunches served on Japanese bullet trains, and on the morning we visited, the stand was serving up chicken meatballs seasoned with soy and five-spice powder, pork vindaloo with local veggie salsa, and tofu curry dotted with green peas.

They’ve made a few other notable appearances in the region since they started, in places like DC’s Emporiyum festival, TEDx Baltimore, and UMBC’s own Homecoming carnival. Their story — three college guys getting together on Friday nights to cook for Habitat for Humanity bake sales before combining their unique talents and interests to start a successful business — is a uniquely UMBC tale of entrepreneurship.

“It sounds like kind of a college thing to do…you want free food, you go to wherever there is free food. But we really enjoyed going to these places and experiencing the food and making friends with these people and cooking with them,” he adds.

Combining their experiences cooking for themselves, for their friends, and in real restaurants, the three incorporated a business and opened the stand in August 2014. Chu, in addition to being the son of a restaurateur, used to manage a Chipotle, and worked for a time for a chef in New York. He’s now Ekiben’s executive chef. Abebe is the logistics guy, making sure the booth is set up and running properly at the farmers’ market and other venues. Yesupriya is responsible for marketing the stand and engaging with customers.

With two out of the three pursuing graduate study at UMBC, and with their permanent location set to open soon, the guys have been running the stand with the help of a small cadre of interns, including Bona Lee ’09, psychology and sociology, one of their old friends from Habitat for Humanity. Lee works full time at a payroll office and helps out at Ekiben in her spare time, drawing the day’s specials on the chalkboard and helping to prep, plate, and serve the food. “[It’s a] labor of love,” she says. 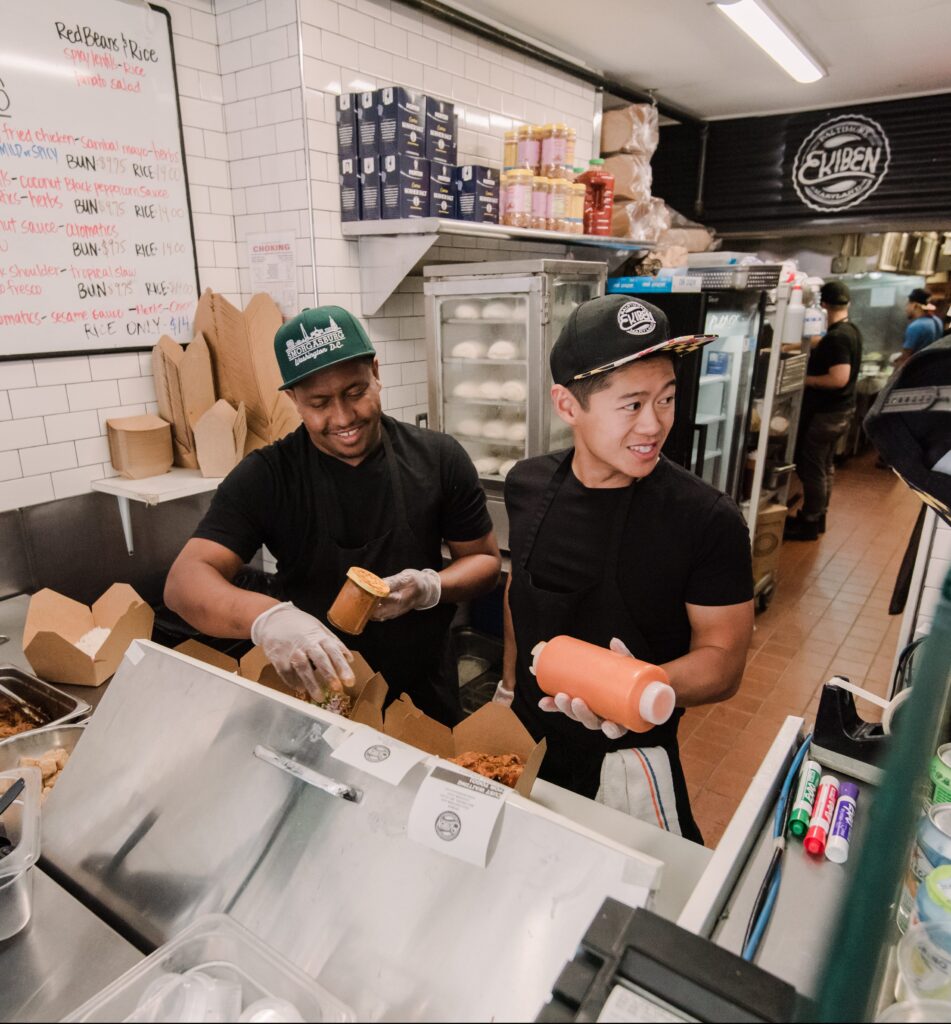