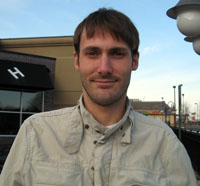 The family of missing UMBC alumnus Matthew Van Dyke ’02, political science, has sought the aid of Rep. C.A. Dutch Ruppersberger in raising the profile of his case. Van Dyke, 31, who has not been heard from since March 13, is believed to have gone missing with several fellow journalists while traveling in Libya.

During a press conference at Van Dyke’s mother’s home yesterday, Ruppersberger told the Baltimore Sun he planned to introduce a resolution about the missing journalist on the House floor.

Read an April story about the search in the Atlantic magazine.