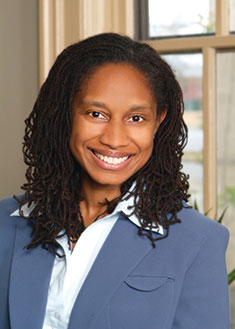 From an early age, Sherece West-Scantlebury ’07, Ph.D., public policy recalls being preoccupied by a single question: Why is this community the way it is?

It was a question that first took root in West-Scantlebury’s own childhood in Brookyn, where she was born to a single teenage mother and lived in public housing. Her family later moved to Baltimore, where they made ends meet on public assistance. In both places, West-Scantlebury recalls witnessing “the usual ills associated with public housing” – drug addiction, alcoholism, domestic violence and abuse. But she also remembers the working people with big dreams who seldom saw those dreams come to fruition.

“I just wanted to know how and why people lived – we lived – that way,” says West-Scantlebury. “It was just always something that drove me.”

Education was the start of her path to find answers. West-Scantlebury earned an undergraduate degree in public administration at Bowie State University, then obtained an Alfred P. Sloan Foundation Policy Institutes grant that led to a master’s degree in public policy from the Gerald R. Ford School at the University of Michigan.

West-Scantlebury wasn’t content with studying policy, however. She pursued a career in the nonprofit sector to help address fundamental social problems through targeted programs and investment in communities.

“I was born with the heart to affect social justice,” she says. “I didn’t choose philanthropy, it chose me.”

West-Scantlebury worked for twelve years as a program associate at Baltimore’s Annie E. Casey Foundation in Baltimore and worked on a doctorate at UMBC.

Even before obtaining her Ph.D., West-Scantlebury was named as president and CEO of the Louisiana-based Carrier Foundation. When Hurricane Katrina hit in 2005, she found herself helping lead (and eventually becoming the CEO) of the Louisiana Recovery Foundation, charged with the fair distribution of donations pouring into the governor’s office.

Two years later, West-Scantlebury was tapped to head the Winthrop Rockefeller Foundation in Little Rock, AR. The foundation’s mission is to improve the lives of all Arkansans by supporting education and economic development programs, and furthering the cause of racial, economic and social justice.

In 2012, the Winthrop Rockefeller Foundation oversaw more than $4.6 million in grants awarded to 65 different groups. West-Scantlebury says the foundation is focused on solving what she calls the “old and difficult problems that keep Arkansas in the bottom five [in the United States] on indicators of children and family well-being. I want us to be number one on those indicators one day.”

West-Scantlebury observes that the faculty staff and students in UMBC’s public policy department were all invested in her success as a nonprofit administrator. “There was great camaraderie, and a determination that we would all complete the program and make great contributions.”

The feeling of accomplishment is mutual, says Donald Norris, chair of the public policy department. Norris nominated West-Scantlebury for UMBC’s 2013 Outstanding Alumna of the Year award in the Social and Behavioral Sciences, which she received at Homecoming last year.

“Sherece’s excellent and effective career in public service and community leadership embodies the best of UMBC and demonstrates the best qualities of her graduate education,” says Norris.

West-Scantlebury has long moved past merely trying to answer her own question about why a community takes its shape. She says she is proud to work for a foundation that supports the demanding but essential long-term changes required to make Arkansas a better place, and help to engineer those changes through grants that target poverty reduction, education and community development.

The keys to success, says West-Scantlebury, are determination, collaboration and patience. “Collective action creates change, but it isn’t fast or easy,” she insists. “It’s about neighbor working with neighbor, but it’s also about sticking with it.”