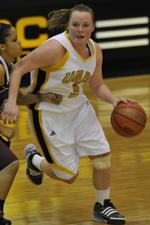 UMBC head women’s basketball coach Phil Stern announced the hiring of former Retriever standout Carlee Cassidy ’10, media and communications studies and sociology, as the Director of Women’s Basketball Operations.
“I am thrilled that Carlee will start her coaching career at UMBC,” Stern said of his former player. “Carlee was a part of the greatest moment in UMBC women’s basketball history and was one of our most prolific offensive players.”
At the time of her graduation, Cassidy ranked second all-time at UMBC with 1,627 points and 347 free throws made — ranking first in both categories during the Retrievers’ Division I era — and still holds the school’s record for three-pointers (248). She became the first Retriever to earn America East All-Conference honors three times, receiving a spot on the second team as a junior and a senior and garnering first team recognition as a sophomore.
Not only did Cassidy excel in UMBC’s record book, but she also made her mark on the America East record book. The Syracuse, N.Y., native was the first player in nearly a decade to lead the America East in scoring in back-to-back seasons. She ranks 21st in the conference all-time in points and second in three-point field goals made.
Cassidy was a part of the 2006-07 Retrievers who also stamped themselves into America East history, defeating the top three teams in the league standings en route to winning a league championship. The 5-9 guard earned America East All-Tournament Team honors during the 2007 conference championships after scoring a team-best 14 points to help UMBC stun top-seeded and defending champion Hartford in the championship game, giving the program its first-ever league title that season and advancing to the National Collegiate Athletic Association (NCAA) Tournament for the first time.
Following her collegiate career, Cassidy played one season with Forssan Alku Basketball Club in Finland.
“I am very excited about the opportunity to be back at my alma mater and to be a part of the UMBC women’s basketball family,” Cassidy said. “I am eager to continue to learn under Coach Stern and the rest of the staff. I am looking forward to the upcoming season and the continued success of our program in the future.”
This story originally appeared on UMBC Retrievers News.