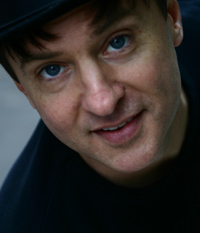 Like so many times in his life before, Ric Ryder moved to the edge of the stage. The lights came up, and a round of applause sounded throughout the audience.

Instead of bowing, however, the Broadway veteran took a step back and clapped along with the crowd for a student named Michael, who just sang 16 bars of “Why Should I Wake Up?” from the musical Cabaret for the second time.

“With only 16 bars, you want to end that BIG,” said Ryder, who taught a one-day master class in vocal performance at UMBC last semester. “Let the voice do it…you don’t need to wave your arms on that final note. There’s a big difference, right?”

A Baltimore native, Ryder grew up enjoying everything musical. As a high schooler, he studied voice on scholarship at the Peabody Conservatory. When he came to UMBC, he did so with one driving motive – to make vocal performance his career. When he graduated in 1984, he felt technically and emotionally prepared.

“What UMBC gave me is that when I graduated, I was really a proficient musician. I really had the skills to be able to compete,” said Ryder, who has since performed everywhere from cruise ships to the Holy Grail of musical theater – Broadway.

“If I went to an audition, and they wanted me to sight read something, I could do it quickly and accurately,” he said. “The sooner you get that technical stuff out of the way, the sooner you can be able to act the song. In terms of singing, there wasn’t anything that I couldn’t do, that I couldn’t accomplish.”

Like many actors, Ryder worked his way up the chain of performance. His first job in musical theater was at Opryland USA, where he performed jazz and other standards four shows a day, six days a week. Later on, he took on a role in Barnum on the SS Norway, a passenger ship. Looking back, he is glad for his pre-New York experiences.

“Doing three to four shows a day in the hot Tennessee valley sun, you learn your threshold, what you’re capable of, how to pace yourself,” he said. “I was interested in working. And that was work that paid the bills.”

Success in the Big Apple

Since moving to New York in 1987, Ryder has found jobs in regional theater, touring companies and on Broadway. He performed in the well-received Broadway musical Starmites, which received seven Tony nominations, as well as Blood Brothers, The Music Man and Grease! in which he portrayed Doody.

“I audition all the time,” said Ryder, who shows no signs of slowing. “It’s just an ongoing process. You’re always looking for the next job. Even while you’re doing a job, you’re still auditioning, maybe looking for a job to replace that job. It never ends.”

Ryder currently works as a private voice teacher and gives master classes similar to the one he gave at UMBC. During the summer, he works at New York University’s Tisch School of the Arts Collaborative Artists Project 21, better known as CAP 21.

Tips for the Broadway Hopeful

Ryder put his teaching skills to work at his UMBC master class. Working with a handful of music majors, he offered suggestions on posture and expression through song. He even sang a couple of his own favorite songs – “Out There,” from The Hunchback of Notre Dame, and “Maria,” from West Side Story.

As for tips for the Broadway hopefuls, he offered students the following: be well-rounded; be prepared; be passionate. He encouraged the students to take advantage of opportunities during school and beyond.