Four UMBC students have been named 2021-2022 Goldwater Scholars, setting a new university record for the most Retrievers to earn this prestigious undergraduate award in a single year. They are Joshua Slaughter ‘22, computer engineering; Kaitlynn Lilly ‘22, physics and mathematics; Gerson Kroiz ‘22, mathematics; and Karan Luthria ‘22, bioinformatics. Their awards make UMBC one of the highest-producing universities for Goldwater Scholars in the nation, directly alongside Harvard, MIT, and Johns Hopkins.

The goal of the Barry Goldwater Scholarship and Excellence in Education Program is to provide the United States with “a continuing source of highly qualified scientists, mathematicians, and engineers” to move the nation forward. UMBC’s prior Goldwater Scholars, including Rhodes Scholar Naomi Mburu ‘18, chemical engineering, have gone on to top graduate programs and promising research careers.

That four UMBC students won awards, from over 1,250 STEM student applicants across the country is remarkable, notes April Householder ’95, director of undergraduate research and prestigious scholarships at UMBC. “Winning the Goldwater means that Slaughter, Lilly, Kroiz, and Luthria join a legacy of scholars who have gone on to become this country’s leading scientists, engineers, and mathematicians,” she says.

“The impact that these students will have in their respective fields is immense,” Householder shares, “and they are ready for the challenge. All four of them had their research internships moved online because of COVID, and they have proved that they are resilient.”

Slaughter, Lilly, Kroiz, and Luthria are among the 410 winners selected this year from a highly competitive national pool of applicants. They will receive substantial scholarship funding that advances their undergraduate work and supports their educational paths.

The students met each other early in their UMBC careers and are close friends, all involved in the Meyerhoff community—Slaughter, Lilly, and Luthria as scholars, and Kroiz as an affiliate.

The impact of algorithms

Joshua Slaughter actually began doing research at UMBC when he was in high school, starting in environmental science. As he explored his interests, he discovered his fascination with using machine learning to evaluate the replicability and reproducibility of algorithms.

Currently, Slaughter works with Distinguished University Professor Tulay Adali, computer science and electrical engineering (CSEE). Their machine learning research has applications in fields like neuroimaging, which uses data-driven algorithms to identify features of neurological disease. Slaughter says that it’s essential to diversify the field of machine learning and that people of all backgrounds need to be involved in the development of algorithms.

“Machine learning algorithms will be crucial in future decision-making. If they are developed without intersectionality being considered, we will have nightmarish outcomes for certain underrepresented populations,” he explains. “That’s a huge reason why I’m pursuing machine learning.”

When Slaughter applied to UMBC, he already had his sights set on the Goldwater. He was researching in the lab when he learned he won the scholarship—working alone due to COVID-19 restrictions. “I screamed,” he said, overjoyed by the news.

In addition to being a Meyerhoff Scholar, Slaughter is in the UMBC Honors College, and a member of the URISE program, which supports undergraduate juniors and seniors who are majoring in the science, engineering and mathematics. He is a member of the National Society of Black Engineers and Tau Beta Pi, the engineering honors society. He has completed research internships at Princeton University and Carnegie Mellon University, has presented his research at conferences, and has published two scientific papers.

Slaughter looks forward to pursuing a Ph.D. after his senior year, and says that receiving the Goldwater Scholarship proves to him that he can succeed in a research career. He’s thankful to UMBC for guiding him, from providing an Undergraduate Research Award to connecting him with internship opportunities.

“UMBC does a great job of putting students first,” says Slaughter. He’s already paying that forward by mentoring high school students in Baltimore and as a CSEE teaching fellow.

Kaitlynn Lilly actually applied to the Goldwater program as a sophomore but didn’t receive the award—an experience shared by Slaughter. She says the feedback she received from UMBC faculty and staff throughout the process was instrumental in her resilience and continued growth as a researcher, and earning the scholarship this year was all the more gratifying.

Lilly’s research focuses on using partial differential equations to understand how large structures, such as bridges, interact with air flow and are impacted by aerodynamics. Lilly currently conducts research with Justin Webster, assistant professor of mathematics. Webster himself received a Goldwater Scholarship in 2007 and knows the impact of receiving the award.

In addition to conducting research at Carnegie Mellon and UMBC, she has completed internships at the Johns Hopkins Applied Physics Lab and University of Hawaii. This summer, Lilly plans to conduct research at the University of Leiden in the Netherlands.

Beyond the lab, Lilly is committed to volunteering at the local Arbutus Middle School, supporting students one-on-one who need extra help in STEM classes. “I’m a first-generation college student, and having someone that has gone through it tell you that you can do it really matters,” she says. “Being that inspiration for someone else has been very rewarding.”

Lilly, who is also a member of the Honors College, explains that receiving the Goldwater Scholarship confirms to her that “what I’m doing matters.” She plans to pursue her Ph.D. in applied mathematics when she graduates from UMBC next year.

Gerson Kroiz began his UMBC undergraduate experience at 16 years old, passionate to pursue research with public impact. He had his eye on the Goldwater Scholarship early, knowing the doors it could open. Receiving the Goldwater “really validates where I am at, and the hard work that I’ve put into my academic path,” as well as the value of UMBC support for undergraduate researchers, he says.

Kroiz has refined his research interests through experiences at institutions across the country. This past summer, he completed a virtual internship at UCLA, adding to his resume of internships at the National Institute of Standards and Technology and UMBC.

In addition to being an affiliate of the Meyerhoff Scholars program, Kroiz is a member of the Honors College and won an Undergraduate Research Award. He volunteers with UMBC’s Creative Coders program at Arbutus Middle School. There, he helps middle school students learn about computer science through hands-on applications such as game design.

He is also a teaching assistant in mathematics, working with Matthias Gobbert, professor of mathematics and statistics. And Kroiz is vice president of the Korean Student Association, ready to serve as president in the 2021-2022 academic year.

Kroiz plans to pursue his Ph.D. in applied mathematics with a focus in high-performance computing and big data after graduating next year.

As an undergraduate who aspires to become a physician-scientist, Karan Luthria is inspired by the profound impact that lab research can have on patients’ treatment and health outcomes. His research focuses on studying similarities between diseases hoping to identify new avenues for drug repurposing.

Luthria explains that he is looking at “how previously developed drugs can be used to treat different conditions.” Although he has been working on this research since freshman year, and has presented his findings at conferences around the country, he says COVID-19 has brought much attention to the value of drug repurposing.

On the day that the Goldwater Scholarship recipients were announced, Luthria refreshed the award page, awaiting the results. When he finally saw his name appear, “I was humbled,” he says. “Just seeing how I have the potential to make a difference in science and to have my research recognized by the Goldwater Committee is exciting.”

Luthria has held several internships, including at Harvard Medical School, the National Institutes of Health (NIH), and the Johns Hopkins Applied Physics Lab. Maricel Kann, associate professor of biological sciences, is his research mentor at UMBC. He says that Kann and his mentors at Harvard and at the NIH played a particularly important role in supporting him to achieve his career goals and throughout the Goldwater application process.

Outside of the lab, Luthria is a teaching assistant in math and biology, and a tutor in the Chemistry Tutorial Center. He is also the logistics director for HackUMBC, a student organization that plans 24-hour-long hackathons for students to develop technological solutions to problems that matter to them. As a member of HackUMBC, Luthria connects with corporations and campus partners to secure funding that supports the annual event, sharing his passion for collaborative public impact research. 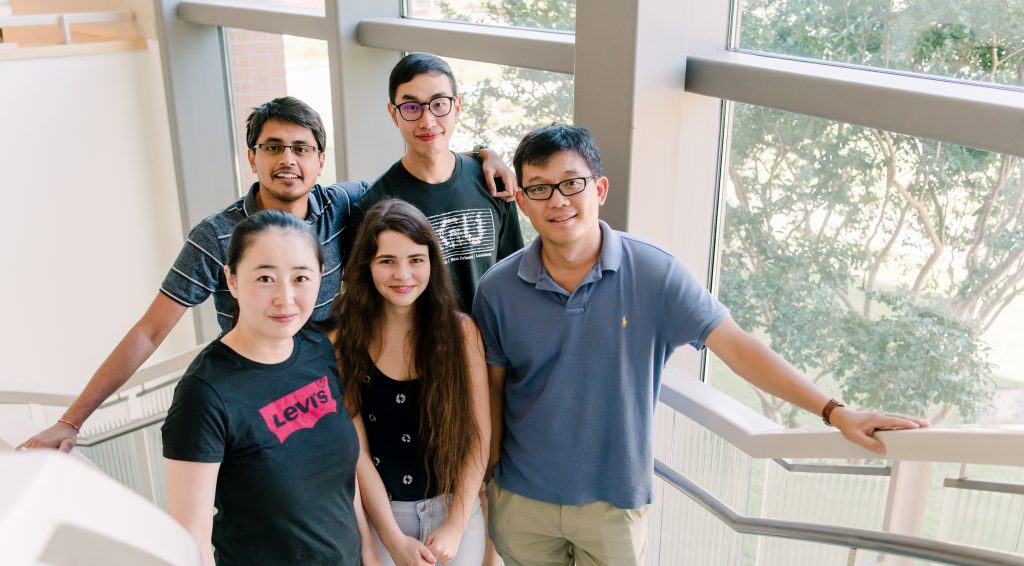