“To whom much is given, much is required.” Meyerhoff scholars internalize this message, which is introduced during Summer Bridge and is almost as ubiquitous as “Focus, Focus, Focus,” and Langston Hughes’ “Dreams” at Meyerhoff gatherings. For many of the scholars, giving back has become a foundational principle in their lives, as they mentor colleagues, students, and interns in their roles as researchers, medical professionals, biotech entrepreneurs, and more.

“We truly are a family, full of people who accept and love each other as we are,” says Rhea Brooking-Dixon ’02, M10, biological sciences. After UMBC, she earned her Ph.D. from Duke University in experimental pathology, and today she is a scientist at Booz Allen Hamilton. She is married to Jason Dixon ’02, M10, computer engineering, so for them, Meyerhoff means family in multiple ways. 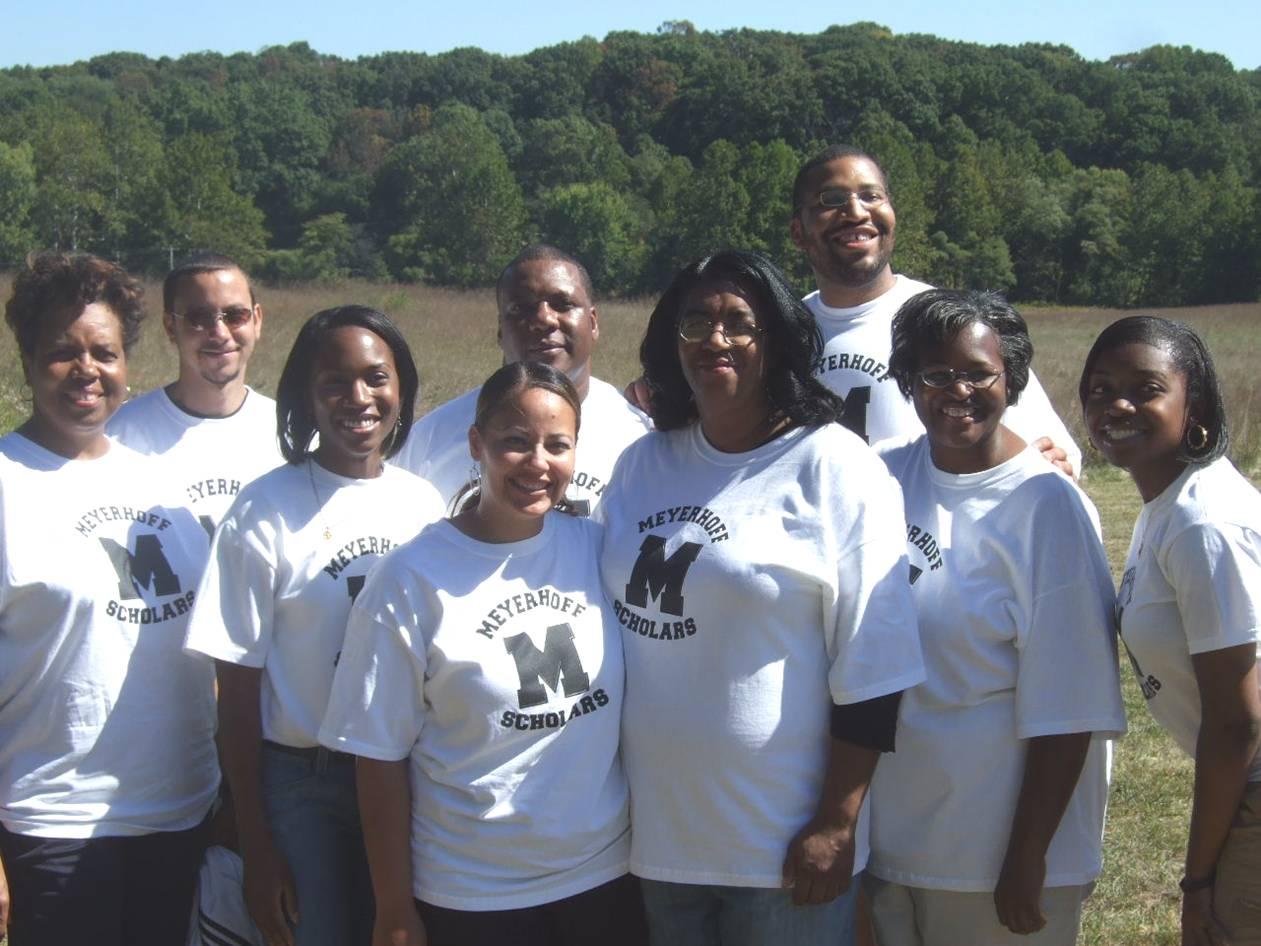 Families always help each other out, and that stuck with Dixon and Brooking-Dixon after graduation. They remember being asked by advisors at UMBC about participation in a study group, both to receive and give support to their classmates. “That showed us that the Meyerhoff Scholars Program wanted us to consider not just what a community could do for us,” they share, “but what we could also do for our community, whatever the scale, to help everyone develop into their best selves.”

Cultivating each Meyerhoff cohort as a family begins with Summer Bridge, a six-week experience that combines academics and social activities. Students learn together, eat together, and play together, forming bonds that buoy them through their years at UMBC and beyond.

“We’re developing a community. So to generate this concept of a community, they’ve got to have a shared experience,” says Keith Harmon, director of the Meyerhoff Scholars Program. “So a big part of Bridge is doing everything together. You do nothing in Bridge as an individual.”

The mentality of giving back and supporting one’s community has been inherent to the program since its early days. Crystal Watkins-Johansson ’95, M3, biological sciences, earned her M.D./Ph.D. at Johns Hopkins University and now serves as director of the memory clinic in the neuropsychiatry program in the Sheppard Pratt Health System, and as an assistant professor of psychiatry at the Johns Hopkins School of Medicine.

“As a graduate of the Meyerhoff Scholars Program at UMBC, I have developed a tradition of mentoring undergraduate and graduate students from the Meyerhoff program,” Watkins-Johansson says, “as the mentoring I received through the program continues to be the foundation of my success.”

Isaac Newton said, “I have only seen farther by standing on the shoulders of giants,” and that phrase, too, has resonated with Meyerhoff Scholars. Erwin Cabrera ’10, M18, biological sciences, shares, “The Meyerhoff staff, program alumni, and UMBC faculty were my giants, so I strive to be a giant for those students who come after me.”

Cabrera’s current role aligns directly with his commitment to mentoring the next generation of biomedical professionals. After earning his Ph.D. at the New York University School of Medicine, he now serves as the associate director for the Research Aligned Mentorship program at Farmingdale State University, a program that provides additional supports—similar in ways to the Meyerhoff Scholars Program—to annual cohorts of Farmingdale students.

For some Meyerhoff scholars, it was the group experience that helped them see their true potential. “Being surrounded by a critical mass of high-achieving African Americans was extremely important to my growth as an individual,” says Kamili (Shaw) Jackson ’97, M5, M.S. ’99, mechanical engineering. “It gave me confidence and humility at the same time.”

Mentoring the next generation of scientists and engineers, and changing their lives in the process, is a worthy goal and a laudable outcome of the Meyerhoff Scholars Program. But the ripple effect goes even farther. Those researchers, many of whom are from underrepresented groups in STEM, bring fresh perspectives and energy to their work, and the results of their efforts can impact an even larger set of people.

“My research experience in Dr. [Michael] Summers’ lab helped me recognize the lasting impact that biomedical research could have on the lives of patients,” shares Chelsea Pinnix ’99, M7, biochemistry and molecular biology. “I began to envision myself as more than a future physician, and instead as a young woman with the potential to heal patients in my clinic and improve medical care for patients that I would never meet through meaningful research.”

As the Meyerhoff Scholars Program enters its fourth decade, the emphasis on paying it forward is just as strong as it was at the program’s founding in 1989. Except now, there already exists a network—a family—of hundreds of Meyerhoff alumni ready to support upcoming students in all that they wish to pursue, which goes far beyond earning a degree (or three).

And that message of changing the world is part of the conversation from the start. Teaching students to think beyond the degree toward thinking about a career where they can make real change in the world, both by doing meaningful research and mentoring others, is an important part of the Meyerhoff program.

Learn more about the Meyerhoff Scholars Program at meyerhoff.umbc.edu.