In addition to taking the number one spot, UMBC Mock Trial’s A-Team received two high-level individual awards. Sydney Gaskins earned Outstanding Attorney awards for both sides of the case, representing both plaintiff and defendant. Gaskins is still in her sophomore year, but has already earned several Mock Trial awards, and she is a finalist for Trial by Combat, an elite one-on-one Mock Trial national championship competition co-hosted by UCLA and Drexel University. Nihir Nanavaty received an Outstanding Witness award. (Above: first on the right.)

“The Georgetown University Tournament became the first time that UMBC Mock Trial ever maintained an undefeated record at a tournament. It was also the first time that an attorney from this program received two Outstanding Attorney Awards in one tournament,” explains Gaskins. “I am honored and grateful to have the opportunity to be a part of history in the making for UMBC Mock Trial. I hope it inspires my team to continue to dream big and believe in ourselves. Anything is possible if you work hard.”

While UMBC Team A was in Washington, D.C., UMBC Teams B and C competed at the Blue Jay Invitational at Johns Hopkins University. These teams are composed primarily of students in their first year of college mock trial, and they performed well against tough competitors. Thomas Azari ’22, individualized study, won Outstanding Attorney. Zachary Linkins ’20, computer science, competing in his first tournament, won Outstanding Witness (pictured below). 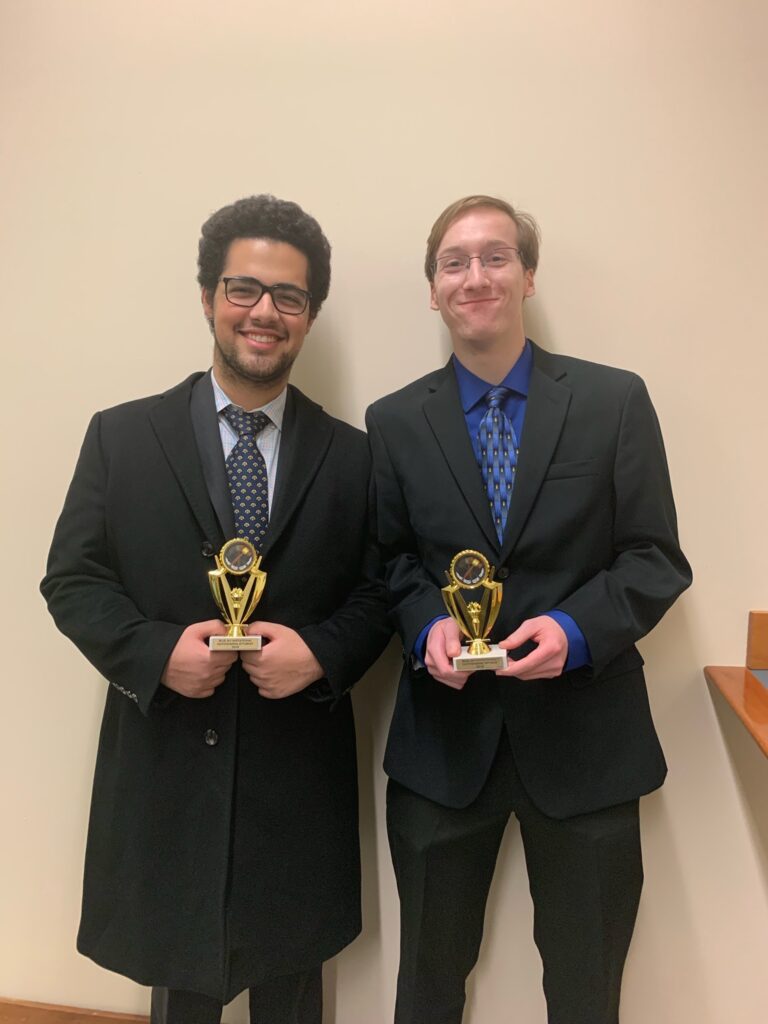 Head coach Ben Garmoe ’13, political science, a litigation attorney in Baltimore, is extremely proud of UMBC’s three mock trial teams. For him, UMBC’s first-place finish at the Hilltop Invitational has special meaning. “I came as a transfer student to UMBC and co-founded the mock trial team with Travis Bell in 2011,” remembers Garmoe. “We competed at the tournament in 2013 and also won an award, so now we have come full circle.” Bell ’14, psychology and political science, is now a public defender in Alabama. Garmoe credits the success of UMBC Mock Trial to UMBC’s leadership in creating a rigorous and diverse academic environment where students from all backgrounds and all fields value critical thinking, rigor, and teamwork.

“Our culture is outstanding. We even draw coaches not directly connected to UMBC,” says Garmoe. “Whitney Wilder, a former competitor at the College of Charleston and now an attorney at Bodie, Dolina, Hobbs, Friddell & Grenzer, P.C., brings important expertise and guidance to the team.”

“As someone who was a four-year competitor for the program and was the program’s president as a senior, I find weekends like this past one to be both rewarding and exciting,” says Dylan Rogers Elliott ’17, history. “I came through the program and have been able to come back and coach while in law school, and nothing makes me happier than seeing both the success and potential of the UMBC Mock Trial Program continue to grow.”

Elliott shares, “We have so much young talent now, throughout the program, and it really feels like we’re getting the foundation set for a really terrific run over the next few years. This past weekend really shows us the potential of our program and underscores just how bright the future is.”

Up next for the focused team is the Owings Mills Regional Tournament, which UMBC is co-hosting with Stevenson University. This will help the teams refine their approach and prepare for the Opening Round Championship Series (ORCS), a national semifinal event hosted by the American Mock Trial Association where the nations 700 teams will compete. From there, they hope to advance to the national championship tournament in Philadelphia.