After three decades of transformational leadership at UMBC, President Freeman A. Hrabowski, III has announced his plan to retire at the end of the 2021-2022 academic year.

President Hrabowski is nationally celebrated for his results-driven commitment to inclusive excellence, collaborative approach to leadership, and mentorship that pairs high expectations with strong support. Through his time at UMBC, these qualities have become core to the university’s unique culture and community. They have also inspired national and global recognition.

During President Hrabowski’s tenure, UMBC has ascended in the national rankings. U.S. News ranked UMBC the nation’s #1 “Up and Coming” university for six years, 2009-14. In 2015 they transitioned to recognizing the nation’s “most innovative” national universities, featuring UMBC every year since the list launched. For the past decade, U.S. News has also consistently ranked UMBC among the nation’s leading institutions for Best Undergraduate Teaching.

Visitors to campus often see President Hrabowski walking down Academic Row. He greets students by name, asking about their classes and post-grad plans, listening, and offering encouragement. That personal level of care has become part of UMBC’s DNA. It’s a quality that draws thousands of new students to UMBC each year and inspires UMBC’s national recognition as a model for supporting student success.

Born in Birmingham, Alabama, in 1950, Hrabowski was a child leader in the Civil Rights Movement. He graduated from Hampton Institute with highest honors in mathematics, and earned his M.A. in mathematics and Ph.D. in higher education administration/statistics from the University of Illinois at Urbana-Champaign.

President Hrabowski came to UMBC as vice provost in 1987, when UMBC was just two decades old, and has served as president since 1992. He is a national leader in science and math education, with an emphasis on the participation and achievement of underrepresented minority students.

Among many high-profile, high-impact leadership roles, President Hrabowski chaired the National Academies’ committee that produced a landmark 2011 report on expanding underrepresented minority participation in STEM. Barack Obama named him to chair the President’s Advisory Commission on Educational Excellence for African Americans in 2012. The following year, his TED talk “Four Pillars of College Success in Science” made waves worldwide, going on to receive more than one million views.

He emphasizes, “collaborative strategies have been at the core of it all.”

At the national level, President Hrabowski is also known for partnering with Robert Meyerhoff to found the Meyerhoff Scholars Program in 1988, to increase the diversity of STEM leaders. Science describes the program as the “gold standard for providing a path into academic research” for students from underrepresented groups.

So far, UMBC has graduated more than 1,400 Meyerhoff Scholars with STEM degrees. More than 800 have already earned graduate or professional degrees. According to NSF data, UMBC is now the nation’s top producer of Black graduates who go on to a Ph.D. in the natural sciences and engineering.

These graduates include alumni like COVID-19 vaccine developer Dr. Kizzmekia Corbett ’08, M16, now an assistant professor of immunology and infectious diseases at Harvard. More than a dozen other institutions have replicated the Meyerhoff program, from Penn State and UNC to UC Berkeley and UCSD (supported by the Chan Zuckerberg Initiative).

Meyerhoff has also had ripple effects within UMBC. Through the program, UMBC faculty and staff learned about what kinds of support most benefit students: hands-on research experience, intensive (even intrusive) advising and mentorship, and mutual peer support built on a cohort model. These findings have inspired programs like UMBC’s Center for Women in Technology Scholars and STEM BUILD at UMBC, reaching an ever-expanding number of students.

Whether they stay in Maryland or travel the world, UMBC’s 85,000 alumni carry with them a unique approach to co-creating communities. That approach is grounded in mutual respect and support, intellectual curiosity, and achievement through collaboration.

“Excellence is never an accident“

Behind UMBC’s accolades are students persevering every day to achieve their dreams, supported by caring faculty and staff. Over the last decade, UMBC has increased its six-year graduation rate for full-time freshmen from 55.7% to 69.2%. And UMBC has become known for welcoming and supporting transfer students, including a large number of first-generation college students.

This year, the pioneering University Innovation Alliance selected UMBC as a member. This public research university consortium works to boost student success through sharing and scaling approaches that work.

In 2018, UMBC made basketball history as the first No. 16 seed to beat a No. 1 seed in an NCAA men’s tournament. In addition to conference championships in several sports during President Hrabowski’s tenure, men’s soccer rose to the NCAA semifinals and UMBC produced top national athletes in swimming and track and field.

Retrievers are regularly recognized as some of the world’s leading emerging researchers, as Rhodes Scholars and Goldwater Scholars. They explore the world as Fulbright Scholars and partner to support communities as Newman Civic Fellows.

“The UMBC story is one of excitement about learning and learning how to work with people different from oneself,” says President Hrabowski. “We are saying to the country and to young people that you don’t have to be rich to be the very best. Middle class institutions can produce some of the best thinkers in the world.”

Over three decades, President Hrabowski has set the bar for educational leadership and earned the highest national honors a university president can receive. He’s written four books and mentored fellow university presidents through a Harvard leadership program. More than 40 universities nationwide—from Harvard and Princeton to University of Michigan and Arizona State—have granted him honorary degrees. But UMBC students are the legacy that makes him feel most proud and inspired.

“We have shown the country that we are a model of inclusive excellence,” President Hrabowski shares. “UMBC is just 55 years old, but we have worked very hard to make history. And we will always be a part of this nation’s history because we produce leaders, including thousands of teachers, lawyers, social workers, and entrepreneurs shaping our communities.”

“Our students, from undergraduate to Ph.D., represent best in class,” he says. “When you think about the UMBC alumni who serve as the head of Johns Hopkins Applied Physics lab, the president of Clemson, the speaker of the Maryland House of Delegates, and the first Black woman to create a vaccine in the history of the world, you can’t help but think of how well UMBC prepared them for those roles.”

University System of Maryland (USM) Board of Regents Chair Linda Gooden shares, “People seek out Freeman’s advice because they understand that, in many ways, he’s set the standard for supporting students to success—and I mean all students: students from every background, every race and ethnicity, every income level.”

Looking ahead, President Hrabowski is excited to see what UMBC will become and achieve.

Cumulative investment in campus construction has grown from $118 million to $1.2 billion over the past three decades. This includes the addition of the Performing Arts and Humanities Building, Interdisciplinary Life Sciences Building, Chesapeake Employers Insurance Arena, and research and teaching spaces in downtown Baltimore. UMBC also has a vibrant presence—12 programs and more than 600 students—at the Universities at Shady Grove.

“Students and student achievement are at the center of everything we do,” President Hrabowski reflects. “At the same time, we support all people as they grow, including our faculty and staff. The dreams and aspirations of everyone in our community inspire us to keep working to be our best selves. There are so many amazingly talented people at UMBC, and we will continue to attract amazingly talented people at every level.”

The USM Board of Regents and Chancellor Perman will soon launch a national search for the next president of UMBC, with details announced as they are available. President Hrabowski notes, “I have no doubt that they will work with the campus to attract a leader who appreciates UMBC values and shares our passion for being the very best at what we do.”

Chancellor Perman says of President Hrabowski, “I don’t think I’ve ever met a person who so powerfully inspires excellence. And that’s exactly what his legacy is—a commitment to inclusive excellence that lives on in UMBC, its students, faculty, staff, and alumni.”

UMBC anticipates welcoming its next president in early 2022. Still, says President Hrabowski, “UMBC will always be a part of me. It has helped to define who I am. Wherever I am, I will be talking about the wonderful place that is UMBC.”

Featured Image: President Hrabowski speaks with UMBC students on campus, under the flags in The Commons. All photos by Marlayna Demond ’11 for UMBC. 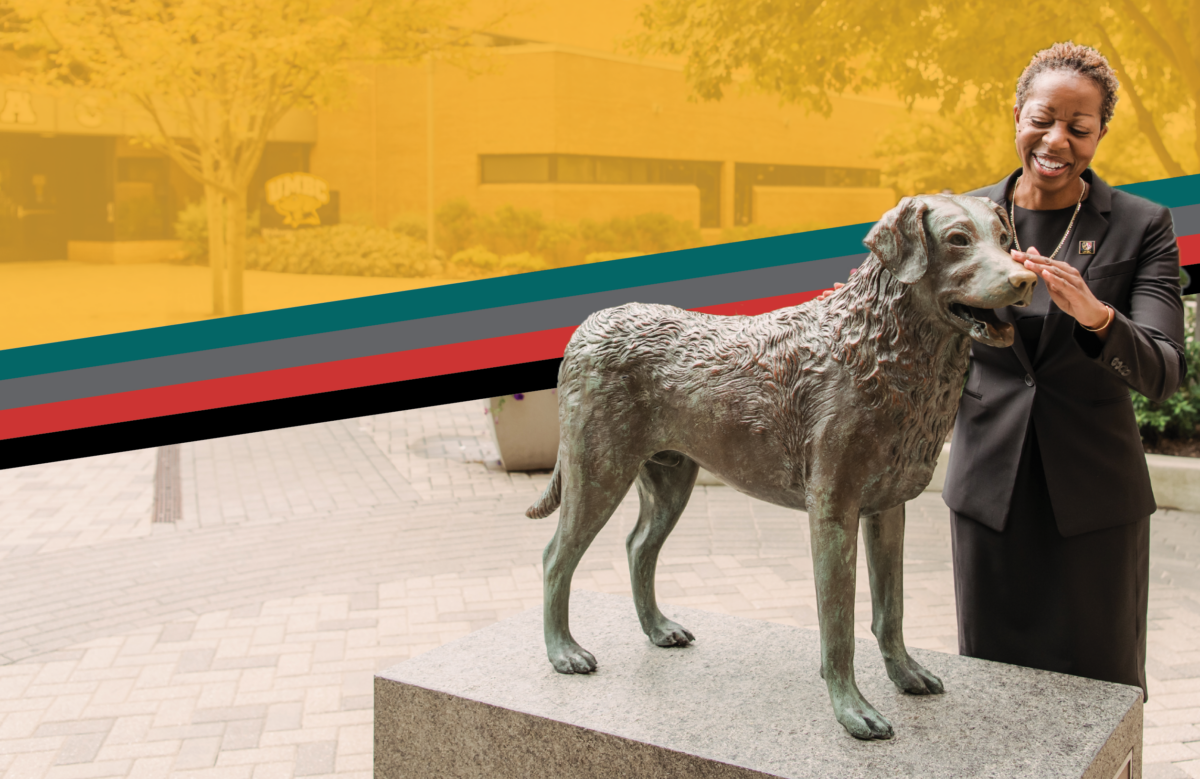