UMBC’s new PI^2 Immersive Hybrid Reality Lab will allow faculty and students to interact with data in different, more visual ways than they have before, reducing the distance between the information and the researchers, said Jian Chen, assistant professor of computer science and electrical engineering, at a ribbon cutting for the space.

Chen led a group of faculty from all three UMBC colleges who together submitted a proposal to the National Science Foundation (NSF) Major Instrumentation Program to make the new lab a reality. During the ribbon cutting event on Friday, October 14, she demonstrated how virtual reality research allows people across campus to collaborate with each other and to approach questions from a range of disciplines in novel ways.

“It’s about research, it’s about education, it’s about everything that we do here,” said Julie Ross, dean of the College of Engineering and Information Technology, about the new space. 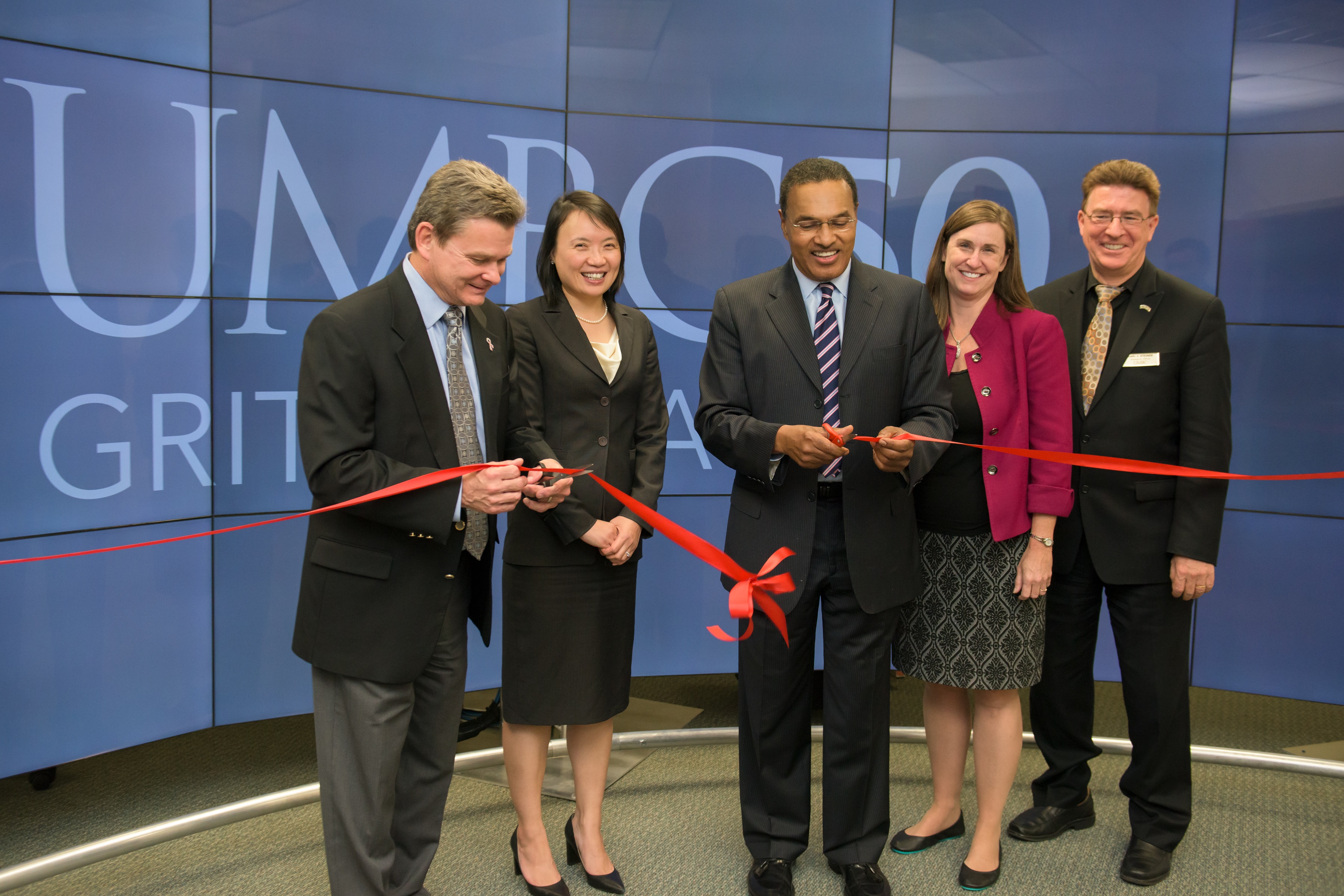 The PI^2 Immersive Hybrid Reality Lab is funded by a $360,000 NSF award, with additional support from Next Century Corporation. In the lab, users wear 3D glasses with sensors attached to them and operate handheld controls that allow them to sensorially immerse themselves in data, which appears on dozens of high-resolution screens that are precisely aligned to work together. Users control the data by manipulating it in the space around them. The user’s body is fairly stationary, but the brain thinks the body is moving within the virtual world.

The lab brings together tools “that will allow humans and the computer to augment each other,” said Chen.

Virtual reality and augmented reality are already well known and generating notable excitement in the  entertainment industry, demonstrated through the recent launch of a Sony Playstation virtual reality system. But John McBeth, president, CEO and founder of Next Century, remarked at the ribbon cutting, “We’re at the beginning of a shift. This isn’t just about games anymore.”

As Karl Steiner, vice president for research, shared in a recent WMAR segment highlighted PI^2 and other virtual reality work being done at UMBC, there are endless for the kinds of systems that could be examined through hybrid-reality based research, including “a wind farm for instance, or how blood flows through a human body…or how car traffic might be on I-95.”

Simply put, says Dean Ross this hybrid reality research space will “allow us to do things we’ve never been able to do,” to develop new, illuminating research across all disciplines.

Image: A user tests out the new hybrid reality lab at its ribbon cutting. Photo by Marlayna Demond ’10 for UMBC.