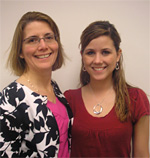 The grace of a ballerina. The poise of an equestrian rider. The flexibility of a gymnast.

Those are the qualities baton twirlers like Stasi Kowalewski ’10 need to have, according to Stasi’s mother Mardel Kowalewski ‘81. And Stasi, who is the world and national two-baton champion, possesses not only those traits but also a desire to learn.

“You need to have time and patience for this sport,” Stasi said. “You need to want it bad enough to learn it. It still takes me a long time to perfect my routines.”

Stasi, who regularly performs at UMBC men’s basketball games, has been twirling since age seven. She picked up the sport as an alternative to soccer, a game in which she naturally excelled. Always wanting a challenge, Stasi decided to give twirling a try instead. Her mother Mardel, both a former twirler and coach, supported Stasi’s decision.

“Being a former coach, I have the opportunity to help Stasi as both a mother and a coach. But learning when to be a coach and when to be a mom is important,” Mardel said. “Sometimes she just needs me to be her mom.”

Stasi took to twirling immediately and her once-a-week practices at age seven turned into 40 hours a week in the gym today, when she’s not in school. Her normal routine consists of stretching, working on “tricks” and running routines. When she’s not twirling, she works as a coach, providing individualized support to young twirlers. Her rigorous schedule and continuous dedication have resulted in her winning the title of World and National Two-Baton Champion not once – but three times, receiving awards in 2008, 2006 and 2005. She’s performed both in individual and group settings, winning awards throughout categories.

But twirling has its setbacks. Stasi has dislocated her knee three times and has literally lost her teeth in the gym. She once caught the baton and the momentum of the catch forced her hand directly to her mouth.

“I was standing there with my teeth in my hand,” Stasi said. “I was hysterical. It was one of the scariest things that ever happened to me.”

“I never pushed Stasi,” said Mardel. “But I always told her when you’re done, you’re done. She just kept on going.”

The continuous practice, recovery from injuries and love for the sport has only enforced Stasi’s dedication to perform – that and that fact that most twirlers “hang up their shoes” at the early age of 25. But both Stasi and Mardel have twirling plans for the future.

“One of the things we’re looking to establish is a scholarship for twirling,” said Mardel. “We need to get the sport out there.”

Stasi hopes to eventually pursue a law degree. She’s currently working on her bachelor’s in political science and American studies. When it comes to studies at UMBC, both Stasi and Mardel are in agreement.

“UMBC is the best kept secret in Maryland,” said Mardel. “It’s a public school with a private feel. You have to be smart to go to UMBC.”

“I came to UMBC because I wanted a challenge,” said Stasi. “You get what you want out of this school.”

But she also hopes to continue her work as a coach.

“Every twirler’s dream is to coach,” said Stasi. “I would love to pass on my knowledge and someday teach a national title holder.”

Stasi’s immediate plans for the future include twirling for the Washington Mystics and a AAA baseball team. She will also be competing with the seven-time reigning world championship team (the Dynamics) in the 2009 twirling competition in Belgium.