Every morning when Lisa Kakavas ‘94, psychology, gets ready for work, her dog Zildjian (or Z for short), inspects her outfit of choice. “[He] gets excited when I pull certain pants out,” says Kakavas. That’s because Z knows that when search and rescue gear comes out, he gets to go to work, too. 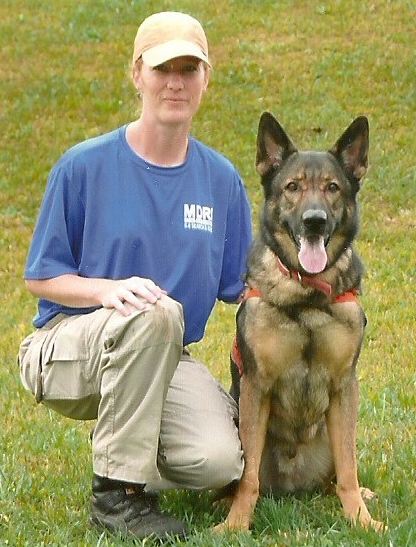 Kakavas and Z–a German shepherd–volunteer with the Mason-Dixon Rescue Dogs (MDRD), an organization that trains dogs in search and rescue of both live and deceased people. She learned about the organization years ago when her husband got involved with MDRD. At first, she says, she thought it was a little crazy that he was driving an hour to “play with his dog,” but it wasn’t long before she started training her first search and rescue dog, Cleo. And Z, of course, followed in Cleo’s footsteps.

The first year or two of a dog’s life in the MDRD is spent training. “For the first full year we build that drive [to search and recover], and we do that by building the paycheck,” says Kakavas. After every hard period of training, Z is rewarded with a good game of tug of war and sometimes a treat.

Now, 14 years after joining MDRD, Kakavas is a lead trainer and the president of the group. As the president, she arranges training dates and locations, schedules certification tests for the dogs, and tracks the progress of each member (both two- and four-legged). In between calls for a search and rescue group and training, Kakavas holds down her job in retail at the UMBC bookstore.

“I fill up my calendar with training and fill in around it,” she said, mentioning that nearly every weekend — both Saturdays and Sundays — through summer was already scheduled with training. Luckily, Bookstore Bob, or the Director of the UMBC Bookstore, doesn’t mind. “[He] is very supportive, and he likes to hear the stories, too,” Kakavas said. And with five years of experience under Z’s collar, he and Kakavas have over 50 search stories to tell. 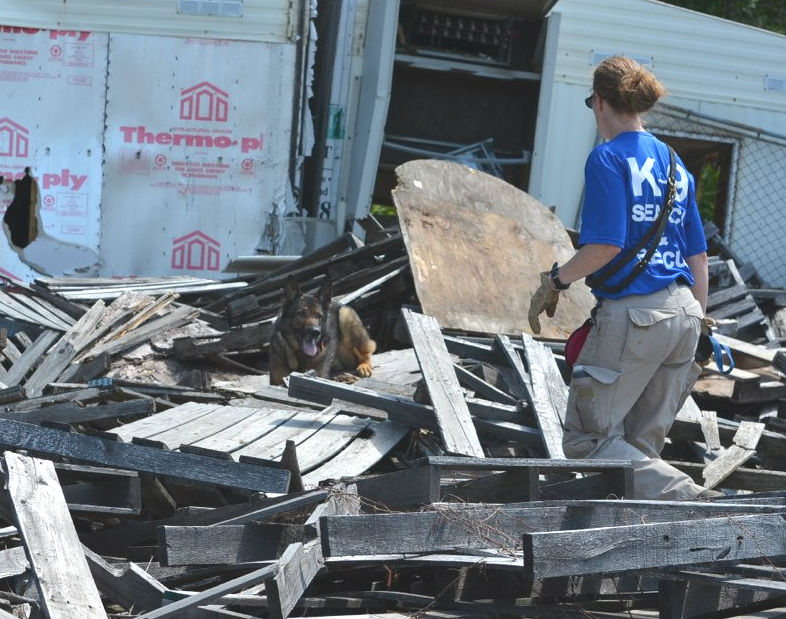 res of land, and the number of dogs sent out depends on the situation. Her longest search was in Pennsylvania, searching for an infant. Kakavas said the trip took 13 hours of searching spaced out over two days. She and Z have also traveled as far away as Peru, called in by local law enforcement to search for a missing hiker. “The search area was the side of an entire mountain,” she said, recalling the stress of the event. Other trips have included night searches for missing persons in natural disaster areas.

Although Kakavas and Z have worked through nights, spent countless hours training together, and hiked hundreds miles over the years, it doesn’t seem to be phasing her, or her dog. “The reason they work so hard is because we make it fun,” she said.

Do you have an awesome story to share? Submit a class note!