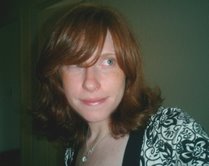 In many ways, Kelly Kwedar ’98, visual and performing arts (photography), leads a double life. A clinical practice supervisor at Memorial Sloan-Kettering Cancer Center in Manhattan, by day, Kwedar manages a staff of forty doctors and twenty other hospital workers who take patients through the cancer treatment process.

By night, she is known to her friends in the Gotham Girls Roller Derby as “Lil Red Terror,” goddess of jamming, blocking, and dishing out pain in the rink.

“Roller derby has been my most amazing experience in New York. I’ve made the most amazing friends. I was never an athlete, but I like to put on some skates and go real fast and knock people over,” said the part-time photographer. “Who woulda thought?”

As a photography major at UMBC, Kwedar stayed extremely involved during her four years on campus. She worked as a phone operator in the Office of Undergraduate Admissions and was a “huge newspaper nerd,” serving as both the arts and opinions editor for the UMBC newspaper, The Retriever Weekly.

Kwedar was also very involved in the photography department at UMBC. She frequently organized her own photography shows and feminist performance art pieces in the halls of the Fine Arts building, and – like so many UMBC students – took her studies very seriously.

“I did the whole insane college kid thing: taking eighteen credits and staying up until five in the morning way too often.”

After graduation, Kwedar packed up her camera and moved to New York, where she worked as a studio manager of a company that created murals for restaurants and fancy homes. After 9/11 however, the market for her artists’ opulent murals slowed, so Kwedar decided it was time for a more stable career.

“An Amazing Place to Work”

Through a friendly connection, she found her career as a clinical practice supervisor at Memorial Sloan-Kettering Cancer Center, where she now manages several outpatient clinics within the hospital. As a manager, Kwedar works to make these clinics function more efficiently through staff development to improve the overall patient experience.

“I really love it. It’s an amazing place to work,” she said. “It’s like seeing little miracles every day. Cancer touches people in so many ways, like seeing their families, everyone who works here just cares a lot, and it shows in their work. It’s super intense, but it’s really rewarding at the same time.”

Then there’s the “Lil Red Terror” side of Kwedar.

After reading about the Gotham Girls Roller Derby, she debated for a month whether or not to try it out. After she met the founder of the league, and the members of the team, she knew it was the perfect sport for her.

“My roller derby personality is tough and kind of crazy,” said Kwedar, who captains the Brooklyn Bombshells. “I always wear little shorts underneath my skirt that say something funny, so after I score a bunch of points or something, I’ll flash the audience.”

Kwedar was one of the original members of the Gotham Girls Roller Derby, playing in their first game in 2004. Since then, the Women’s Flat Track Derby Association has expanded to almost twenty teams nationally, and other leagues have formed in Canada and Ireland. The New York travel team is composed of players from the four base teams: Bronx Gridlock, Queens of Pain, Manhattan Mayhem, and Brooklyn Bombshells, which Kwedar calls her own. The travel team won the East Coast regionals last year, and headed to Austin, Tex., to play the top four nationally ranked teams.

Kwedar’s injuries are also something for the record books, but she wears them as badges of honor. She has suffered black eyes, countless bruises, and a hemorrhaged retina, which left her literally seeing red. She even had to wear an eye patch for about four months.

As a Brooklyn resident and roller derby queen, Kwedar stays true to her UMBC roots in her lifestyle and in her hobbies. Kwedar is staying artsy, selling her photography on the popular www.etsy.com.

“There’s art everywhere around here, and I appreciate it a lot, even if I’m not doing it as my day job,” she said. “You think you can move to New York and just become a famous artist. The reality of that is a lot different, especially if you go out to bars and clubs every night, which is really easy to do. You really have to be pretty smooth to make it happen, and that’s just not me. I enjoy doing it for fun.”

As an artist, she finds her current home constantly inspiring.

“There’s such diversity in New York, and I think UMBC was a good starting point for that. There was everything you could ever imagine there. Every race, every ethnicity, every group is here,” she said. “I live in Brooklyn now, and I love it. I don’t think I’m ever going to leave. I just love the feeling of it. Most Tuesday nights I’m just at home goofing off on the internet, but I could be at 10 different bars, a burlesque show, or going to see a band. The same is true for roller derby. It’s the gamut of every kind of woman you could imagine, and they all play roller derby, and it’s so much fun.”