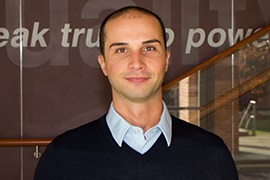 Felipe Filomeno, an assistant professor of political science, has been awarded the Early Career Prize of the Economics & Politics Section of the Latin American Studies Association. The award comes in recognition of his article “Patterns of Rule-Making and Intellectual Property Regimes: Lessons from South American Soybean Agriculture”, published in the Journal of Comparative Politics in 2014. Below is a summary of Filomeno’s article: