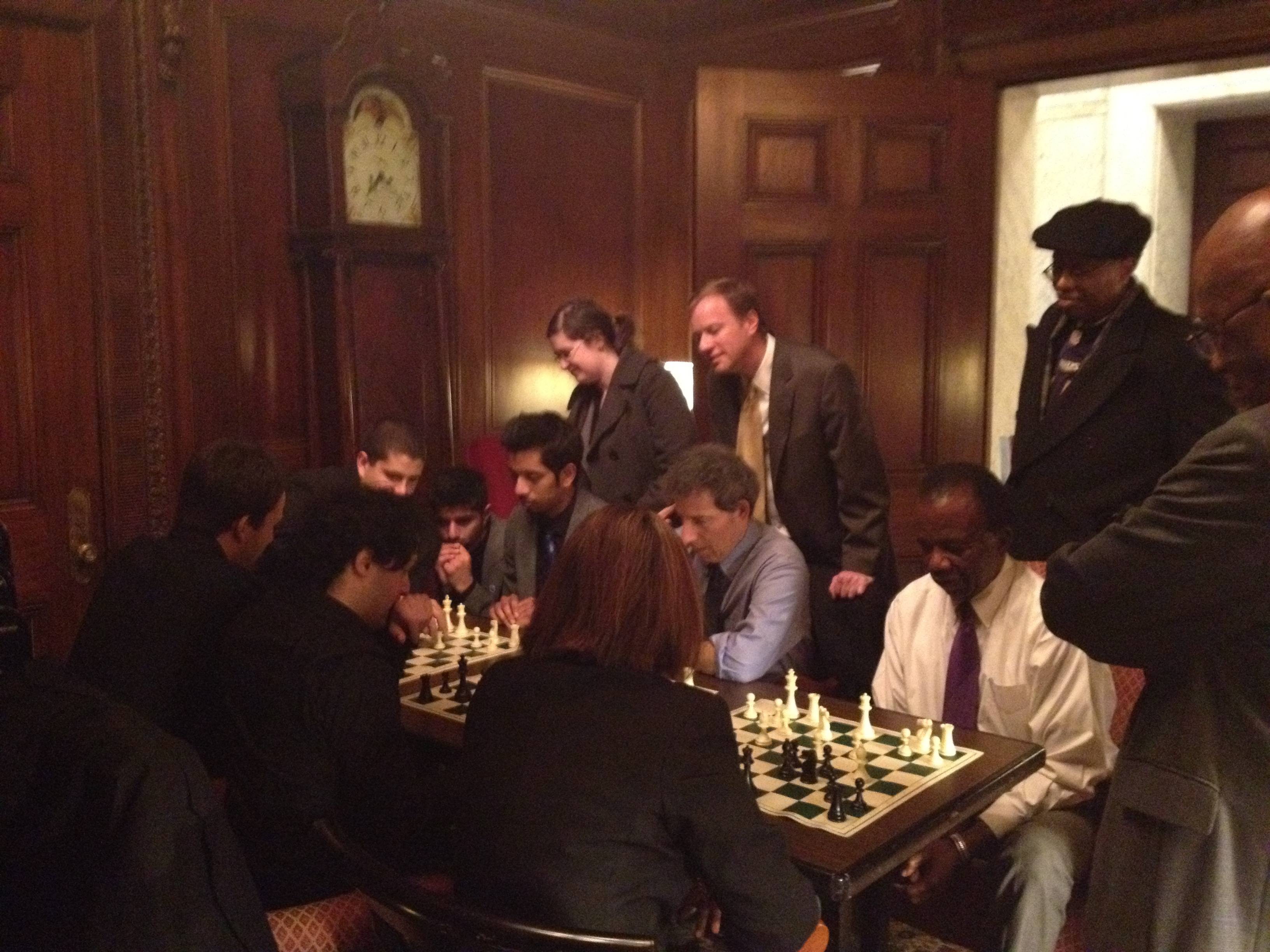 Earlier this month UMBC’s chess team was formally recognized on the floor of the Maryland State Senate and the House with a citation from Speaker Pro Tem, Delegate Adrienne Jones ’76, psychology.

The UMBC team then played a friendly match with the members of the Maryland General Assembly Chess Challenge.

“It was a great experience to be recognized by the House of Senate and the House of Delegates. After being awarded we ended up playing for about two hours games with some of the senators, said Sabina Foisor, a member of the team and a graduate student at UMBC.

According to Collin Wojciechowski, a senior and UMBC government relations assistant, the event did not consist of any tournament style play but instead each student played a legislator multiple times. “From what I saw,” says Wojciechowski, “a legislator never won a game.”
Many members of the General Assembly trickled in and out of the room throughout the night, with a few playing only a game and then leaving, but those who were a central part of the tournament and stayed the whole time included Senator Ulysses Currie, Senator Jamie Raskin and Senator Bryan Simonaire.

“We all had a good time and hope to be able to do it again,” said Foisor.

About the UMBC Chess Team

The UMBC chess team recently tied for first place in the Pan-Am Intercollegiate Team Chess Championship, advancing to the 2013 President’s Cup, known as the “Final Four” of chess.

The UMBC chess team headed into the 2012 Pan-Am Intercollegiate Team Chess Championship with a record nine titles to its name. The competition known informally as the Pan-Am, was held December 27 to 30 in Princeton, New Jersey. Since the tournament began in 1946, dozens of universities throughout the Americas have participated. The Retrievers won their first Pan-Am title in 1996, and then embarked on a five-year title streak from 1998 to 2002.

This year, the Retrievers tied for first place with 3 other Universities: University of Texas, Dallas; Webster University, which had 2 teams; and the University of Illinois. “It was an exciting finish. This was the strongest Pan Am in the history of the event. Twenty – three grandmasters as well as 5 teams rated over 2500 competed,” says Alan Sherman, Director of the UMBC Chess Program.

The UMBC team, all on chess scholarships, is composed of students not only with exceptional chess skills but also with strong academic records, Sherman says. UMBC requires students to maintain a 3.0 GPA to maintain chess scholarships. The Retrievers last won the Pan-Am title in 2009, and took second last year. This year’s team will compete in the 2012 President’s Cup, the “Final Four of College Chess,” to be held in April 6-7, 2013 in Herndon, Va.