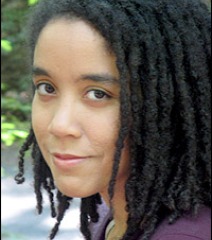 Playwright Kara Lee Corthron ’99, theatre, will co-premiere her newest work, “Holly Down in Heaven,” at the Forum Theatre in Silver Spring and Penumbra Theatre in St. Paul, Minnesota, next month.
Corthron, who was named UMBC Outstanding Alumni of the Year in Visual and Performing Arts in 2008, has won a number of awards for her work, including The Vineyard Theatre’s 3rd Annual Paula Vogel Playwriting Award, the Princess Grace Award, two NEA grants, the Helen Merrill Award, Lincoln Center’s Lecomte du Nouy Prize (three-time recipient), the Theodore Ward Prize, the New Professional Theatre Writers Award, two MacDowell fellowships, residencies at Skriðuklaustur (Iceland), the Millay Colony, and Ledig House.
Her new play is described as such by the Forum:

When Holly, a brilliant fifteen-year-old born-again Christian, becomes pregnant, she banishes herself to the basement and confides only in her dolls — particularly a life-size psychiatrist doll who closely resembles Carol Channing. Her only human contacts are an indulgent father, a clumsy ex-boyfriend, and a new tutor … who just might be able to out-smart her. Hilarious and poignant, this world-premiere comedy explores birth, faith, and life outside of heaven.

Learn more about the showing at the Forum Theatre here.
Read more about Corthron on her website.