Venturing into a Gestapo interrogation cell is not the way many people would choose to do research.

Nevertheless, Kristina R. Gaddy ’09, history and modern languages and linguistics, felt it was crucial to the process of writing her first book, Flowers in the Gutter. The book tells the true account of the Edelweiss Pirates, German teenagers who resisted the Nazi regime with acts from playing forbidden music to disseminating anti-Nazi flyers.

The kind of stories we need 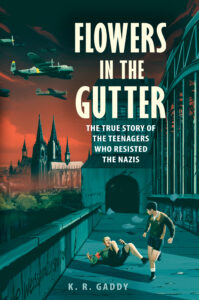 “There’s a lot of dystopian fiction out there of kids living in an awful world and trying to resist and I always imagine this is the real-life story of kids living in dystopia. What would you actually be doing?” says Gaddy.

Sadly, these stories often ended up in interrogation cells like the preserved one Gaddy visited in Cologne, Germany. “It was really important for me to go to those spaces and experience them as they would have experienced them,” says Gaddy. She also used the trip to dive deep into archives from the time, all in German. It was a chilling and often depressing experience, she says, but it was also part of understanding the pirates’ little-known movement.

While “there’s been so much written about World War II,” Gaddy says that “there are still things that are needed to be written.” Many people know about the White Rose resistance movement, she says, but much of Edelweiss Pirates’ story has remained untold. “We think it’s just natural that you do something heroic and people are going to just say that it’s wonderful [but] that’s not the reality,” she says.

In documenting the teens’ rebellious acts, Gaddy also highlights just how relatable they are. They wore strange clothes and played their own kind of music and had an irreverence that Gaddy says she found appealing.

“It just felt like alright, this is so compelling, this is the kind of stories that we need,” says Gaddy. 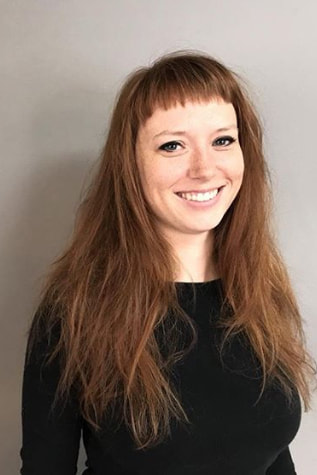 Figuring out how to tell those stories was a process that started at UMBC. Gaddy graduated in 2009 with degrees in history and modern languages and linguistics before going on to an MFA degree from Goucher College in creative nonfiction writing. Her work has been published in a variety of places including The Washington Post, The Baltimore Sun, Bitch Magazine, and for her first paid publication, UMBC Magazine.

“The type of writing I am interested in doing wouldn’t be possible without the background in history at UMBC,” says Gaddy. “All the research, that’s 100% something I learned to do at UMBC, in terms of writing research papers, getting primary sources, and going in the archives.” All her primary sources being in German called for language skills she honed during her undergraduate years both at UMBC and during a semester abroad in Berlin.

To look critically at history, Gaddy found she also needed to recall her lessons in historiography, or the study of why and how historical stories are told. She says that UMBC history professors Denise Meringolo and Kate Brown helped her ask the questions of “how do we remember this? What is it we are looking at and how is it that different people experience that differently or the same? If we’re then presenting what we know about it, how are we changing the perception as we’re doing that?”

Meringolo says Gaddy distinguished herself early on as a student through her talents in writing and her creative thinking.

“I fully expected that Kristina would pursue a career as a public historian after graduation,” says Meringolo. “Arguably, by becoming a writer of creative non-fiction, she is working as a public historian. Her book tells a true story, and she has worked to identify its most provocative and meaningful core. She has also thought carefully about her intended audience, seeking to understand what they care about and how this story might help transform the ‘foreign country’ of the past into a familiar and meaningful landscape. I am proud of her and I am enormously proud to have played a small role in her life.”

“This is real life”

Gaddy’s book is coming at a time when these questions are more relevant than ever. In fact, she started to work on it during the summer of 2016, when “it felt incredibly timely in terms of political climate and what’s going on. As I was working on it, it was almost like it can’t get any timelier, but it kept getting timelier.”

Her target audience of today’s young adults includes everyone from those protesting in the streets to those who are using racial epithets. She hopes that teachers might use her book in their classes.

“I really feel strongly about non-fiction that it’s a really compelling way to tell stories – this is not a fantasy, this is real life, this is what really happened,” she says. “I hope people feel a little bit inspired by what these kids did and what kind of lessons we can take from their actions and put it into our lives.”

Header image: Gaddy places a candle at the memorial to the Edelweiss Pirates, November 2019.