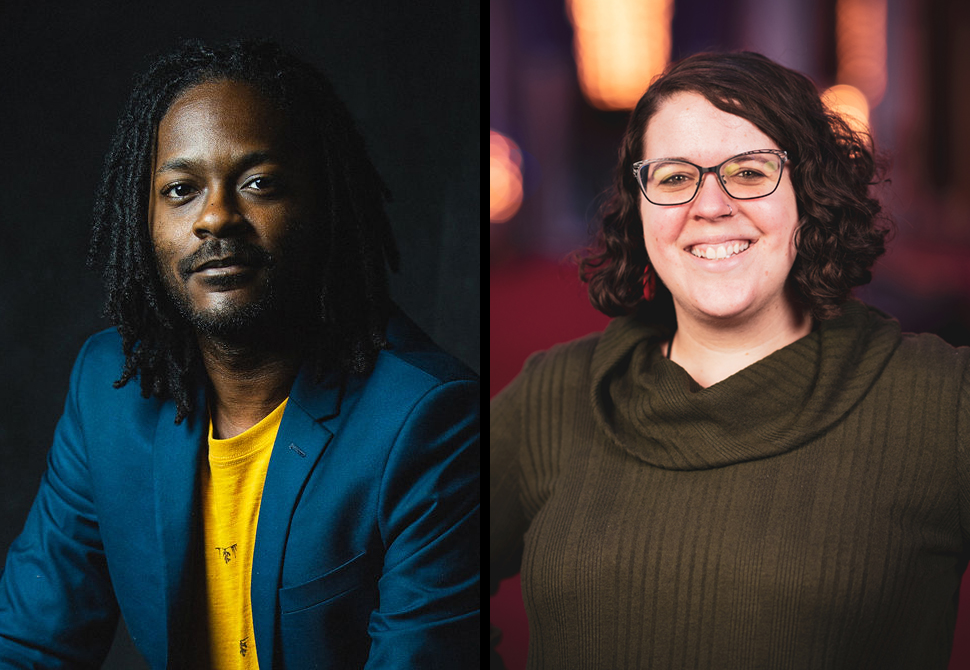 The Center for Innovation, Research and Creativity in the Arts (CIRCA) presents an arts alumni spotlight featuring Jovan James and Lena Salins.

Jovan James ’13, visual arts, is a writer-director-producer dedicated to breaking down barriers in Hollywood by telling compelling stories about the Black experience and beyond. Lena Salins ’12, theatre, is Production Manager at the John F. Kennedy Center for the Performing Arts, using her platform to elevate the voices of women, BIPOC, LGBTQ+, and disabled artists. They each will each talk about their work and respective professional trajectories since graduating from UMBC.

Following graduation from UMBC, Jovan James earned his MFA from New York University Tisch School of Art in 2019. His first two short films The Jump Off (2014) and Tadpole (2018) have been screened at dozens of film festivals across the U.S. and have earned him awards. In January 2020, he premiered his MFA thesis film BUCK, a dramatic thriller that follows a depressed Black gay man who finds peace in an unexpected place in the midst of a downward spiral, at the prestigious Sundance Film Festival. BUCK has since screened at the BFI London Film Festival, Durban International Film Festival, and Newfest Film Festival, which awarded him the Emerging Black LGBTQ+ Filmmaker Award. Jovan is currently working with Bad Robot Productions in Los Angeles on a series adaptation of BUCK as well as on several other projects.

Lena Salins is Theater Production Manager at the John F. Kennedy Center for the Performing Arts where she specializes in performances for young audiences and special events. While serving as the Production Manager at GALA Hispanic Theatre, the production of In The Heights won 9 Helen Hayes Awards out of 18 nominations. Before becoming a production manager, Lena worked as a stage manager across the DC/Baltimore area. She graduated from UMBC in 2012 with degrees in Theater Production and Anthropology. Lena believes strongly that social justice can be achieved through the performing arts, and uses her platform as a production manager to promote equity.

Admission is free, and lunch will be provided. Please register in advance for this event.

CIRCA is committed to making its events accessible to everyone. Please send an email to circa@umbc.edu to request specific accommodations.